High-schoolers get face time with extremists in class 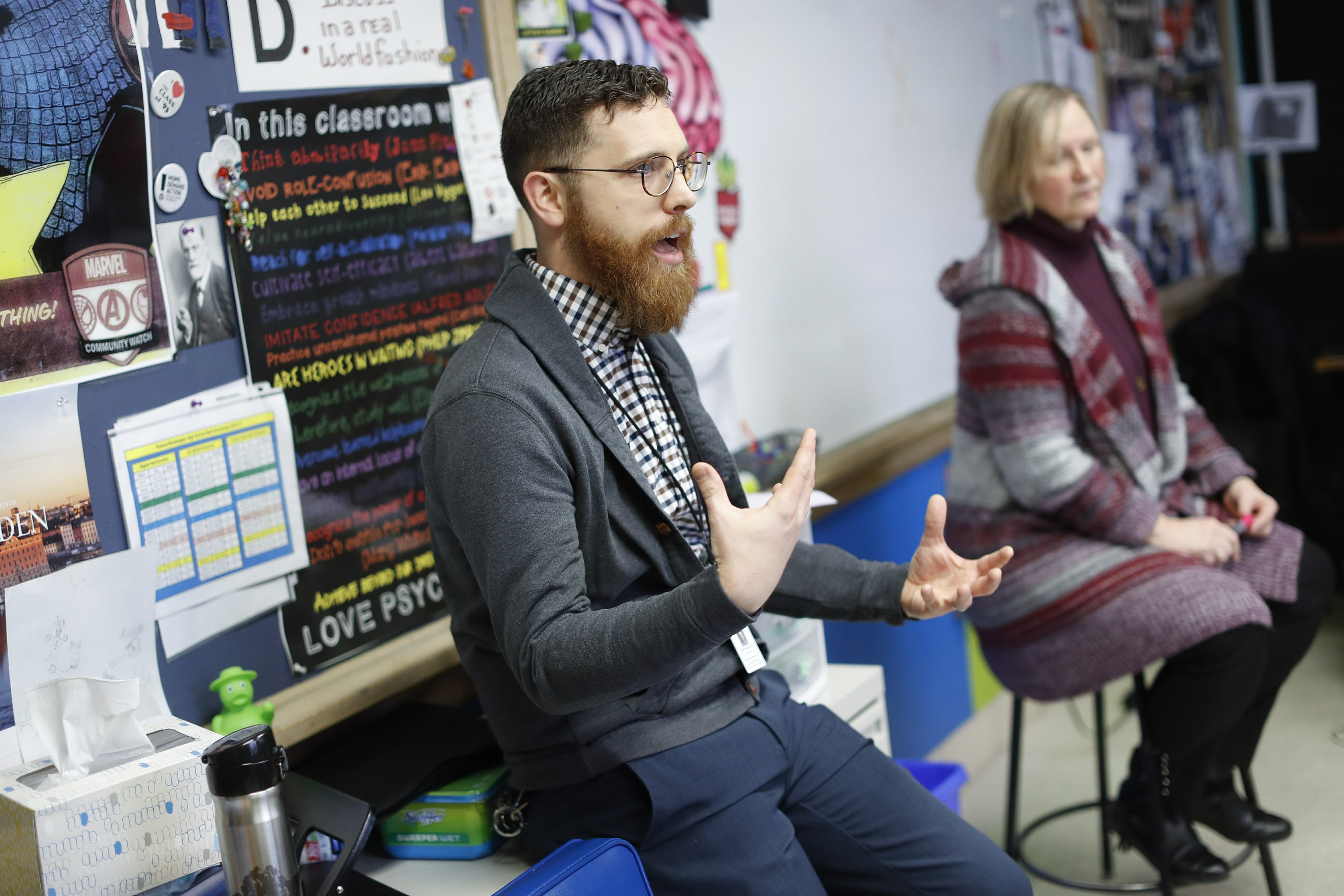 WORTHINGTON, Ohio — Last week’s videotaped encounter at the Lincoln Memorial left many wondering about the state of reasoned political discourse in the country, or if it exists at all in a hyperpartisan era of red “Make America Great Again” hats versus pink women’s march caps.

In a video from Jan. 18, a group of boys from Kentucky’s Covington Catholic High School, a Native American activist and a cluster of Black Hebrew Israelites faced off in an uncomfortable confrontation that spread online and in the media. It has prompted national debate about both civility in politics, the seeming lack of tolerance for those of differing political beliefs and how both are influencing the nation’s youth.

That debate sounded all-too-familiar to Ohio social studies teacher Judy Galasso, who has taught a class on political radicalism for three decades now.

“If someone’s yelling things at you, if you’re presented with groups that you disagree with, my hope is that we train our kids well enough that they’re not going to react,” Galasso said.

Galasso and co-teacher Jonathan Duffy invite members of America’s most extreme political groups —from the National Socialist Movement to the Weather Underground, from the Revolutionary Communists to the Tea Party— into their classroom each semester. They teach students to engage respectfully with those of differing beliefs and to ask questions.

The Covington Catholic incident has seemed to further divide the nation. Parents, alumni and others have rallied to the white teenagers’ defense and, in a tweet, President Donald Trump called the students “symbols of Fake News and how evil it can be.” Others largely supported the Native American activist, describing him as a victim of racism and white entitlement.

In Galasso and Duffy’s class, no one shies away from such political discomfort.

“In 2019, our teachers generally are like, ’You know what? Let’s redirect to a different topic, because that one sounds like it’s loaded with land mines,” said Pete Skully, principal of Thomas Worthington High School, where Galasso teaches. “The idea of poli-rad is, you know what, let’s explore all those land mines and talk about them.”

U.S. Political Thought and Radicalism, “poli-rad” for short, has been steadily offered as a social studies credit by the suburban Columbus district since the 1970s. Over the decades, its unconventional speaker series has generated excitement, sparked protests and left classrooms at turns emboldened, shaken or inspired.

“In 2019, no school board in America would approve a class like this, but in Worthington, there’s no way you could get rid of it,” Galasso said.

About half the district’s seniors take the class each year. That’s created a legion of alumni ready to defend it when a new crop of parents in the affluent, largely white district raise concerns about the potential dangers of the class.

Jen Miller, 26, a Nashville-based music producer and 2010 Thomas Worthington graduate, said poli-rad was one of the most valuable classes she took in high school.

“It opened meaningful dialogue and that, to me, is priceless,” she said. “Sure, it might make some parents uncomfortable, but the class isn’t radicalizing students; it’s teaching students about radicalization, which is pretty important. I mean, look at the context that we’re living in today.”

Worthington School Board member Julie Keegan said she wishes more districts would offer such a course. She took poli-rad in 1984. Her husband and all four of her children are also alums.

“In 1984, Worthington was much more homogenous that it is right now,” Keegan said. “So part of that class was just sort of pointing out, ’Hey, guess what? Not everybody thinks like you, looks like you, talks like you.”

Retired teacher Tom Molnar said he created the course in 1975 with input from students. He had been given the course topic, but no guidance. When students said they wanted to learn about radical groups operating in America at the time, he had to tell them there was no source material to work from. One student suggested inviting the groups in.

“I told him it was completely nuts, but they encouraged me to take that message to the principal, and the principal said, ‘It’s brilliant,’” he said.

Poli-rad students study each speaker ahead of time, gathering background and preparing questions. Afterward, teachers help them think critically about how factors such as deceptive language or personal charisma were used.

The teachers attribute the course’s success to a few key ground rules: Presenters must come from across the political spectrum, they can’t be censored, students must remain respectful and instructors can’t share their personal political beliefs.

“One thing we teach kids when speakers come in is to truly listen to what they’re saying,” Duffy said, “and just because they think they know what this individual believes, you still have to listen and accurately reflect.”

In the early 1990s, Ku Klux Klan members arrived to the classroom in full robes and hoods. Their silhouettes could be seen from the main road in front of the high school, spreading community alarm. To ease concerns, teachers agreed to a compromise: They would cease inviting active Klansmen as long as the district placed no further restrictions on their speakers.

Senior Tori Banks, 18, who took the course last semester, said it helped her expand her views and learn tolerance.

“If I weren’t in the class and I saw some of these speakers or people of certain stances walking around, I may feel uncomfortable,” she said. “But I think the way we do it in poli-rad is a very safe environment.”