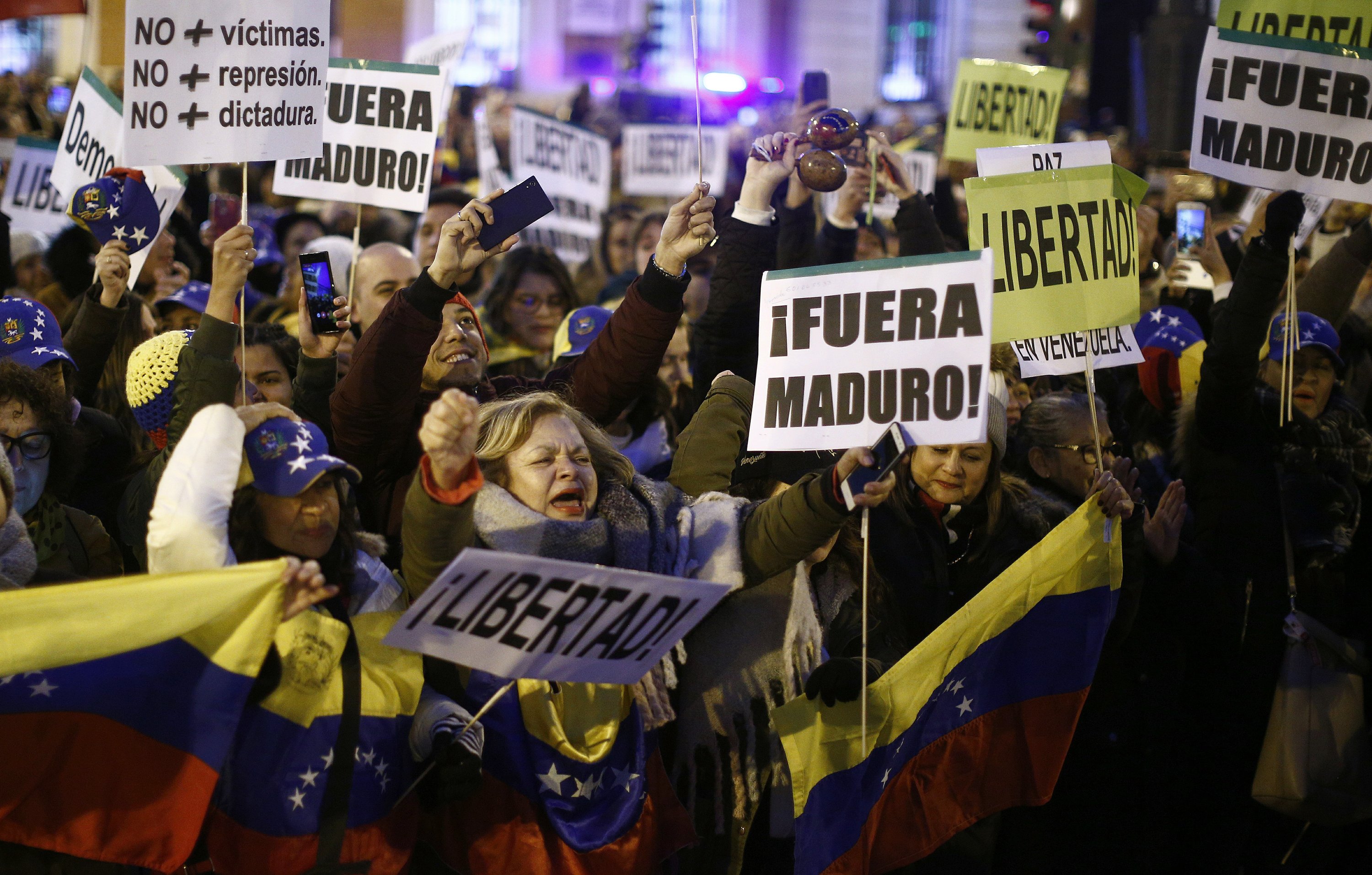 BARCELONA, Spain — When Maria Eugenia Pirona moved from Venezuela to Spain over six months ago she had lost hope that things would get better in her homeland. A lawyer and former civil servant, Pirona had seen her comfortable life ruined by the deepening political and economic strife.

Her pension was cut and, as with many Venezuelans, hyperinflation made her savings worthless. And after she was attacked by a group of thugs aligned with the Socialist government for her opposition to the governments led by Hugo Chavez and Nicolas Maduro, she decided that moving was the only choice. So she sold her car and bought a plane ticket to Spain, leaving her elderly mother and house behind.

But ever since opposition leader Juan Guaido declared himself interim president last week, garnering support and recognition from a long list of countries including the United States, Pirona is hopeful she might soon be able to return home to Caracas.

“What happiness, freedom has arrived, we are removing the usurper,” Pirona said on Wednesday as she marched with thousands of Venezuelans in Barcelona against Maduro a few moments after Guaido had declared himself the new leader. “We will return to Venezuela to rebuild our country. All of us who have emigrated to other countries, we will help Venezuela to lift itself up.”

Pirona is part of an enormous outflow of people from Venezuela in recent years as its economy and democratic institutions have crumbled.

According to the International Organization for Migration, the Venezuelan diaspora has skyrocketed from 695,000 in 2015 to over 2.3 million by last year. Neighboring Colombia has seen its Venezuelan population soar from 48,000 to 870,000 in that period, while thousands more have fled to other Latin American countries and the United States.

The number of people born in Venezuela who live in Spain has jumped from 165,000 in 2015 to 255,000 last year, according to Spain’s National Institute of Statistics.

Pirona came to Spain because of the language and cultural links, and because Venezuela took in many Spaniards fleeing Gen. Francisco Franco’s dictatorship from 1939 to 1975, she said. But her move was still challenging.

Like many of her fellow Venezuelans who cross the Atlantic Ocean to Spain, Pirona is an educated professional who has been forced to do whatever it takes to get by. She says it’s hard at her age, 55, to start over and she’s cleaning houses as she waits for her asylum application to be processed. “But I prefer that a thousand times to suffering and being persecuted and seeing my Venezuelan people suffer so much.”

Ricardo Caballero moved from San Cristobal, Venezuela, to Barcelona 17 years ago after Chavez had been re-elected. Caballero worked several jobs and even slept in the streets before he finally found stability. Today he works as an athletics teacher and is married with two children. He’s also helped countless relatives, friends and strangers move from Venezuela, often giving them a place to sleep on his couch.

Caballero and Pirona met at church. She was crying. He recognized her Venezuelan accent and offered help. Soon enough he found her a house-cleaning job.

“I’ve tried to help them so they don’t have to go through what I have lived, so that they are not tricked,” said Caballero, 42, who was scammed in his early days in Barcelona when he rented a room by internet only to find that the room didn’t exist. He doesn’t think about moving back to Venezuela anymore after establishing his life in Spain. But the latest political developments also make him hopeful that some Venezuelans could return to their homeland.

Pirona and Caballero have been watching the news anxiously.

On Saturday, the Spanish government, along with fellow European Union members Germany, France and Britain, gave Maduro an ultimatum.

“Spain is giving the government of Nicolas Maduro eight days to call free, transparent and democratic elections, and if that does not occur, Spain will recognize Juan Guaido as the president charged with carrying out those elections,” Spanish Prime Minister Pedro Sanchez said in a televised address.

Although Spain did not immediately recognize Guaido as the legitimate leader of Venezuela like the U.S., Canada, Brazil and other countries did, Pirona is very pleased with the country that welcomed her.

“They support us and are not OK with what is going on in Venezuela,” she said. “I am very thankful to Spain.”