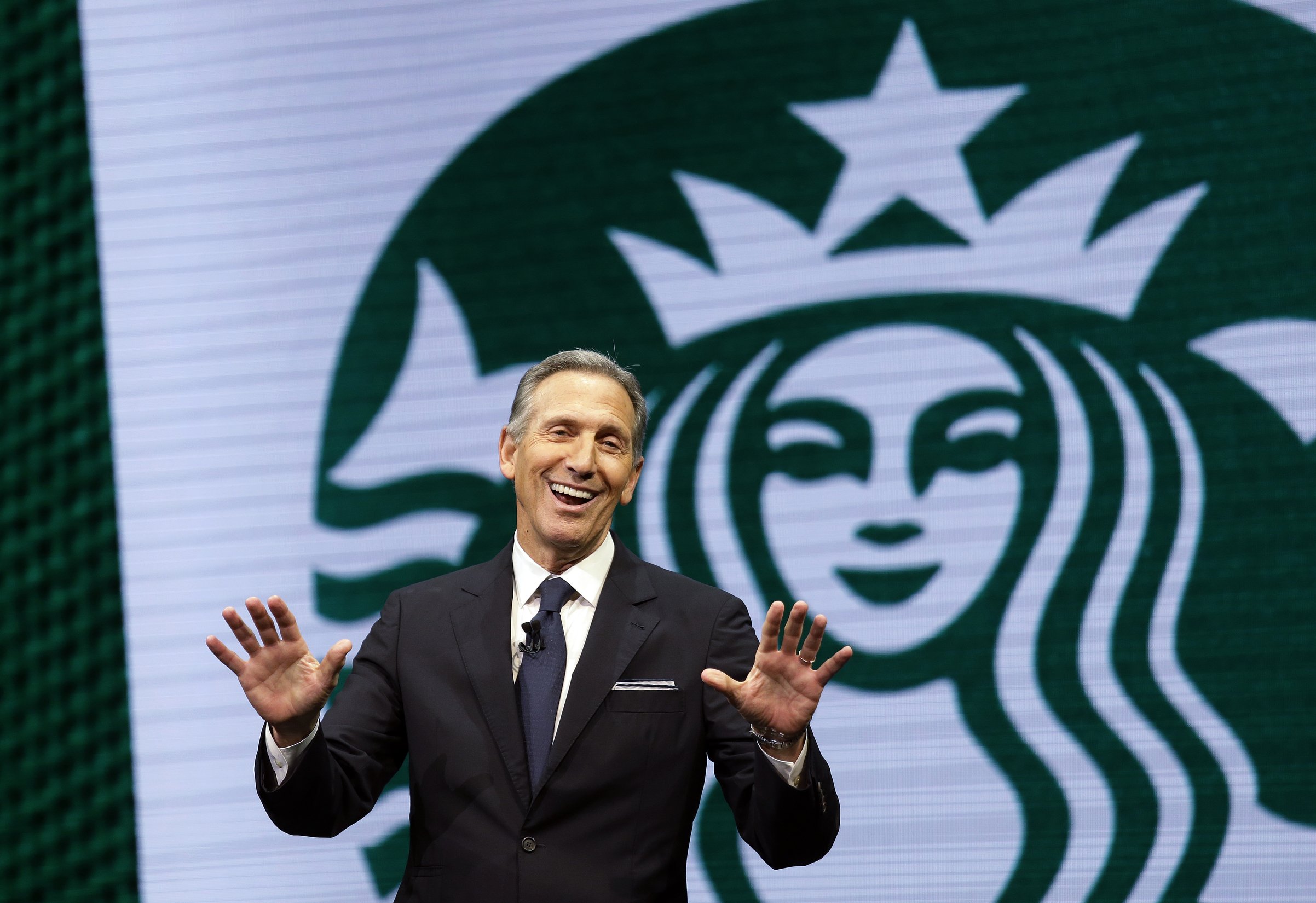 SEATTLE — The most powerful super PAC in Democratic politics is promising to make former Starbucks CEO Howard Schultz “a target” if he launches an independent presidential bid.

Democrats across the political spectrum lashed out at the billionaire businessman on Monday after he teased the prospect of an independent 2020 bid, a move Democrats fear would split their vote and all but ensure President Donald Trump’s re-election.

“If Schultz entered the race as an independent, we would consider him a target… We would do everything we can to ensure that his candidacy is unsuccessful,” said Patrick McHugh, executive director of Priorities USA. The super PAC spent nearly $200 million in the 2016 presidential contest, much of it to support Democrat Hillary Clinton.

“The bottom line,” he said, “is that I don’t think Americans are looking for another selfish billionaire to enter the race.”

Democrats conceded that they had few tools to dissuade Schultz from launching an independent campaign — as he told “60 Minutes” he was considering — though many were skeptical that he would actually follow through. No presidential candidate in the modern era has run a successful independent campaign.

“The data was very clear and very consistent. Given the strong pull of partisanship and the realities of the electoral college system, there is no way an independent can win. That is truer today than ever before,” Bloomberg, who is considering a Democratic 2020 bid, said in a statement.

He continued: “In 2020, the great likelihood is that an independent would just split the anti-Trump vote and end up re-electing the president. That’s a risk I refused to run in 2016 and we can’t afford to run it now.”

Tina Podlodowski, the Democratic chairwoman in Washington state, where Schultz has lived for decades, also blasted the potential of an independent campaign.

“Howard, if you want to run for President, run as a Democrat,” she said in a statement. “If you want to rely on your money to get elected instead of talking with voters, run as a Republican. But a billionaire buying his way out of the entire primary process does not strengthen democracy; it only makes it more likely that our democracy will be further strained under another four years of President Donald Trump.”

Trump himself weighed in on Monday, tweeting that Schultz “doesn’t have the ‘guts’ to run for President!”

Schultz indirectly addressed the uproar in a video posted on social media Monday.

“At this time in America when there’s so much evidence that our political system is broken — that both parties at the extreme are not representing the silent majority of the American people — isn’t there a better way?” Schultz said, noting that he’d be traveling the country in the coming weeks and months meeting with voters.

“And what better expression of our democracy than to give the American people a choice that they deserve.”

The 65-year-old Seattle billionaire launched a tour Monday to promote his latest book, “From the Ground Up: A Journey to Reimagine the Promise of America.” He has stops this week in New York; Tempe, Arizona; Seattle; and San Francisco — but no dates listed for the early voting states of Iowa or New Hampshire.

He’s been mentioned as a potential candidate many times before, and he’s done little to quell speculation about his presidential ambitions since saying when he retired from Starbucks last June that his future could include “public service.”

On paper, Schultz offers a number of qualities that might appeal to voters. He grew up in public housing in New York City’s Brooklyn borough and became the first person in his family to graduate from college.

He took over Starbucks when it sold only coffee beans, not cups — it had 11 stores and fewer than 100 employees at the time — and grew it into a global behemoth that now has close to 30,000 stores in 78 countries. Along the way, he adopted an ethos of corporate responsibility, making Starbucks one of the earliest U.S. companies to offer stock options and health insurance even to part-time employees, and more recently partnering with Arizona State University to cover tuition for workers who want to earn their bachelor’s degree online.

He’s waded into contentious social issues. In 2013, Starbucks asked customers not to bring guns into stores following the Sandy Hook Elementary School shooting, and in 2015, Schultz drew anger and ridicule after he urged baristas to write “Race Together” on cups to spark conversations amid tension over police shootings of black men. Last year, after two black men were arrested in a Philadelphia Starbucks while waiting for a business meeting, Starbucks closed 8,000 U.S. stores early so employees could take anti-bias training.

But some of his views might clash with a Democratic Party gearing up to unseat Trump. While some potential nominees, including Massachusetts Sen. Elizabeth Warren and California Sen. Kamala Harris, have endorsed single-payer health care, heavily taxing the rich or free tuition at public colleges, Schultz has criticized such proposals as unrealistic and instead emphasized expanding the economy and curbing entitlements to get the national debt under control.

“It concerns me that so many voices within the Democratic Party are going so far to the left,” Schultz told CNBC last June. “I ask myself, ‘How are we going to pay for all these things?’ in terms of things like single-payer or people espousing the fact that the government is going to give everyone a job. I don’t think that’s realistic.”

The Democratic National Committee declined to address Schultz directly. Spokeswoman Xochitl Hinojosa offered this response: “We are focused on defeating Donald Trump, and anyone who shares that goal should vote for the Democrat nominee in 2020.”