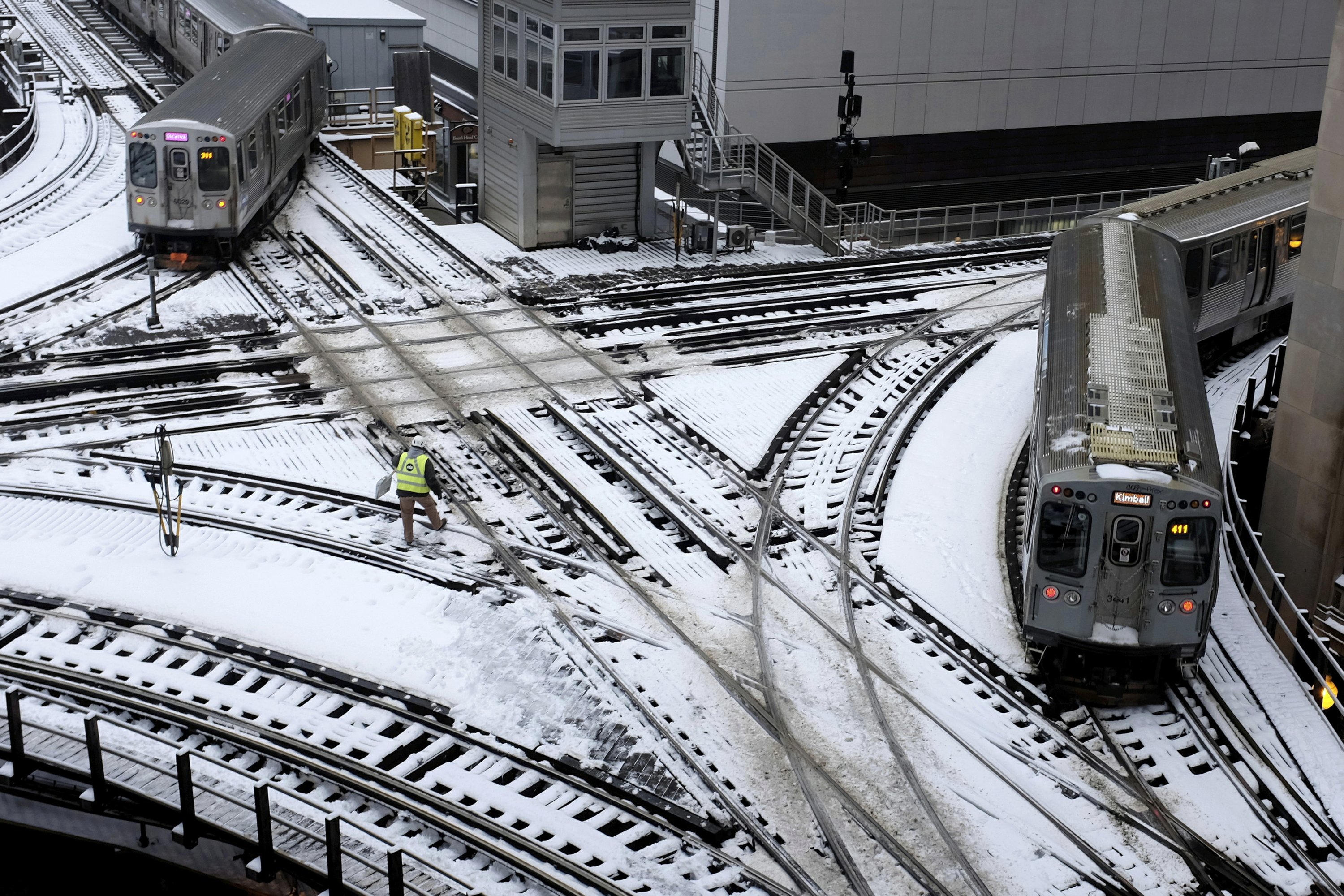 MILWAUKEE — Heavy snow and powerful wind created blizzard-like conditions Monday across parts of the Midwest, prompting officials to cancel about 1,000 flights at Chicago’s airports and close hundreds of schools. But forecasters warn the most dangerous weather is yet to come: frigidly low temperatures that the region hasn’t seen in a quarter century.

Snowplow drivers had trouble keeping up with the snow in Wisconsin and Minnesota, where up to 14 inches (35.5 centimeters) was expected. Chicago-area commuters woke up to heavy snowfall, with more than 5 inches (12.7 centimeters) already on the ground. In Michigan, non-essential government offices were closed, including the Capitol.

But the snow is only “part one, and maybe even the easier part” because temperatures will plummet over the next three days, said Brian Hurley, a meteorologist with the Weather Prediction Center.

“That’s quite dangerous. You’re talking about frostbite and hypothermia issues very quickly, like in a matter of minutes, maybe seconds,” Hurley said.

“That’s not just unusual. That’s 40 degrees below normal,” Hurley said. “When you think about it in that sense, that’s a big ‘whoa.’”

Cold weather advisories are in effect across a broad swath of the central U.S., from North Dakota to Missouri and spanning into Ohio. Temperatures will be as many as 20 degrees below average in parts of the Upper Great Lakes region and Upper Mississippi Valley, according to the National Weather Service.

Homeless shelters were preparing for the onslaught of cold. The Milwaukee Rescue Mission’s call volume was “unusually high,” but there should still be enough beds for people who need them, said the mission’s president, Pat Vanderburgh.

“We are being especially vigilant during the night,” he said. “Monitoring our doors, our security are going out on the street, we’re partnering individuals that go out proactively looking out for homeless individuals and sharing with them winter clothes and food.”

Chicago Mayor Rahm Emanuel urged residents to check on their neighbors and take safety precautions. He said city agencies are making sure homeless people are in shelters or offered space in warming buses.

Hundreds of schools were closed across Michigan as road conditions deteriorated, including Eastern Michigan University. The largest public school districts in Wisconsin and Minnesota also were among those closed, including districts in Milwaukee, Minneapolis and St. Paul. The cold also prompted officials to close some schools in eastern Iowa, while Chicago Public Schools officials said they were monitoring the weather ahead of Wednesday’s cold snap.

Authorities say a 9-year-old Nebraska boy died in a crash Sunday night along icy Interstate 80 in western Iowa. In eastern North Dakota, officials have issued travel alerts because of blowing snow. The Minnesota State Patrol was responding to scores of spin outs and crashes early Monday in the Twin Cities metro area because of snow-covered and icy roads.

In Wisconsin, plow drivers were having a difficult time keeping up with the snow in Sheboygan. Minutes after a plow passed, roads were once again becoming snow covered, according to the Department of Public Works.

Even the fabled “frozen tundra” of Lambeau Field, home to the NFL’s Green Bay Packers, wasn’t able to withstand the heavy snow and wind that closed hundreds of businesses, schools and government offices in Wisconsin. The stadium said tours, the Packers Hall of Fame and other related businesses were closed to visitors Monday.

Wisconsin Gov. Tony Evers declared a state of emergency and activated the National Guard, directing all state agencies to assist if any emergency response and recovery efforts are needed.

Courthouses and most offices were closed in Milwaukee, Waukesha, Columbia and Washington counties, while more than three dozen flights were canceled early Monday at the Milwaukee area’s largest airport, Mitchell International Airport.