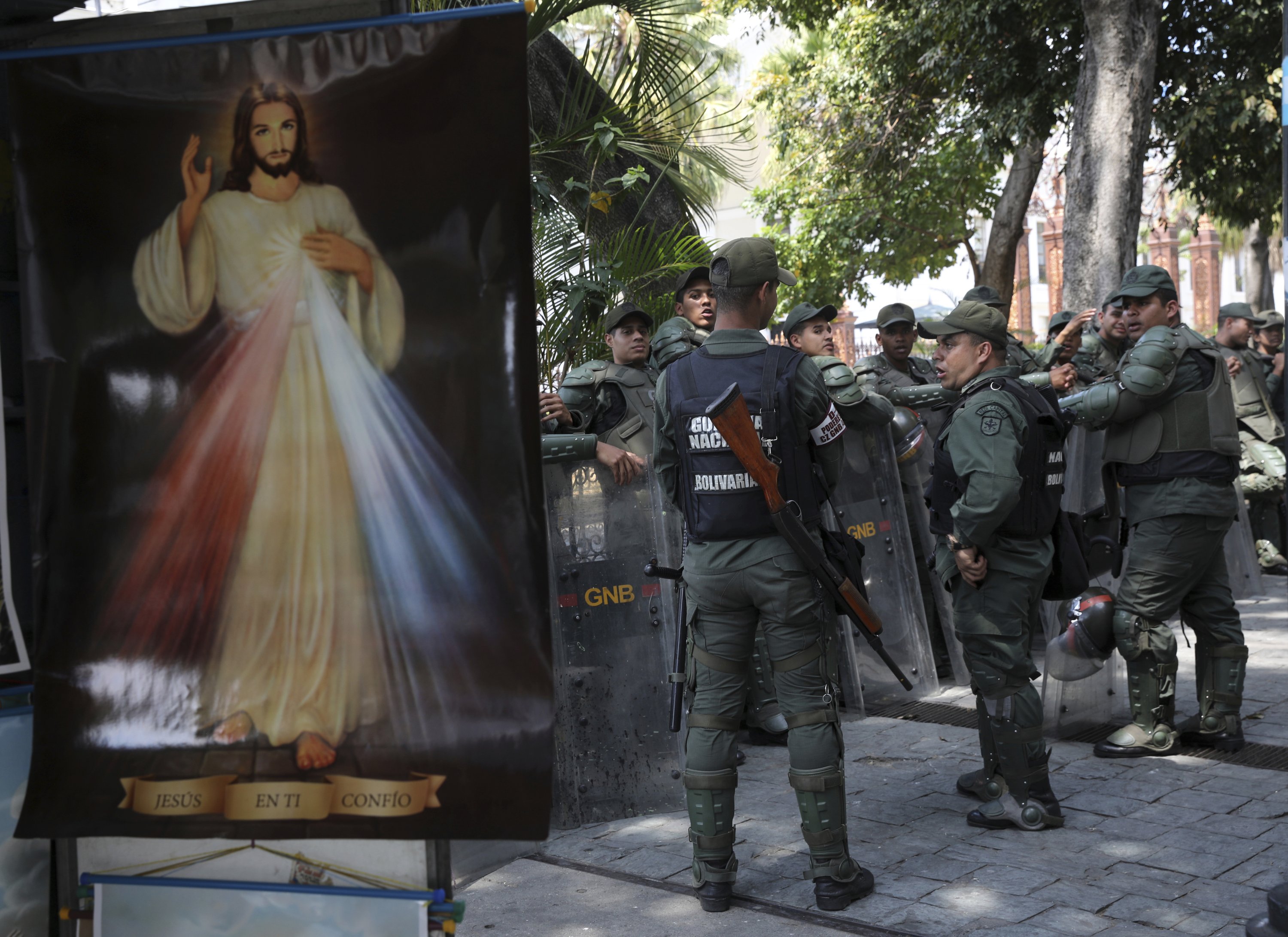 CARACAS, Venezuela — Opposition leader Juan Guaido is looking to ratchet up pressure on President Nicolas Maduro with walkouts across Venezuela on Wednesday, just a day after the embattled socialist administration barred Guaido from leaving the country while he is investigated for anti-government activities.

The man challenging Maduro’s claim to the presidency is urging Venezuelans to step outside their homes and workplaces for two hours beginning at noon in the first mass mobilization since he declared himself the nation’s rightful leader a week ago during another round of big protests.

The surge in political maneuvering has seen two dozen nations, including the United States and several big Latin American countries, backed Guaido, and the Trump administration has imposed sanctions that could starve the already distressed nation of billions in oil revenue.

But Maduro is holding firm in refusing to step down. He oversaw military exercises in recent days while seeking to consolidate support from the armed forces and he is accusing Washington of staging a coup.

On Tuesday, the Supreme Court barred Guaido from leaving the country after chief prosecutor Tarek William Saab announced that he was opening a criminal investigation of Maduro’s foe, who heads the opposition-controlled congress. Saab is a key Maduro ally and the high court is stacked with Maduro loyalists.

“Once more we’ll come out victorious,” Maduro, dressed in a green cap and shirt, said Tuesday while standing before rows of troops. “We are on the right side of history.”

Guaido has thus far managed to avoid arrest and the Supreme Court did not strip him of his legislative immunity, though the new investigation could signal that Maduro’s administration is moving to take a more punitive approach.

Speaking Tuesday outside the National Assembly, Guaido said he was aware of personal risks.

“I don’t underestimate the threat of persecution at the moment, but here we are,” he said.

The U.S. has emerged as Guaido’s most powerful ally, announcing on Tuesday that it was giving him control of Venezuela’s U.S. bank accounts.

U.S. Secretary of State Mike Pompeo certified that Guaido has the authority to take control of any Venezuelan government accounts at the Federal Reserve Bank of New York or any other U.S.-insured banks. He said the certification would “help Venezuela’s legitimate government safeguard those assets for the benefit of the Venezuelan people.”

On Monday, the U.S. imposed sanctions on Venezuela’s state-owned oil company, Petroleos de Venezuela SA, that could potentially depriving the Maduro government of $11 billion in export revenues over the next year.

Venezuela’s economy is already ravaged by hyperinflation and widespread food and medical shortages that have driven millions of people to leave the country.

Maduro called the sanctions “criminal” and vowed to challenge the U.S. in court. “With these measures, they intend to rob us,” he said.

Violent street demonstrations erupted last week after Guaido during a huge opposition rally in Caracas declared that he had assumed presidential powers under the constitution and planned to hold fresh elections to end Maduro’s “dictatorship.”

Under Venezuela’s constitution, the head of the National Assembly is empowered to take on the duties of the chief executive under a range of circumstances in which the presidency is vacated. The opposition argues Maduro’s re-election last May was a sham.

Guaido, a previously little-known lawmaker, has re-invigorated the opposition movement by pushing for three immediate goals: to end Maduro’s “usurpation” of power, establish a transitional government and hold a new presidential election.

The U.S. State Department is telling Americans not to travel to Venezuela, warning of the threat of being arbitrarily arrested or caught in a protest. Venezuela was put on the highest U.S. level advisory, a list that also includes Syria, Afghanistan and Iraq.

The U.N. human rights office says security forces in Venezuela detained nearly 700 people in just one day of anti-government protests last week — the highest such tally in a single day in the country in at least 20 years. It says more than 40 people are believed to have been killed.

Maduro’s allies blame the opposition for the violence and deny the high death toll as well as reports that minors were among those arrested.

Socialist party leaders have been organizing counter-protests by thousands of Maduro supporters in different parts of the country.

On Tuesday, Maduro announced he is expanding Venezuela’s civilian armed militia to 2 million members. The reserve force was created by the late Hugo Chavez to train civilians to assist the armed forces and defend the socialist revolution from attacks.

“These are moment of history — and battle,” he said.