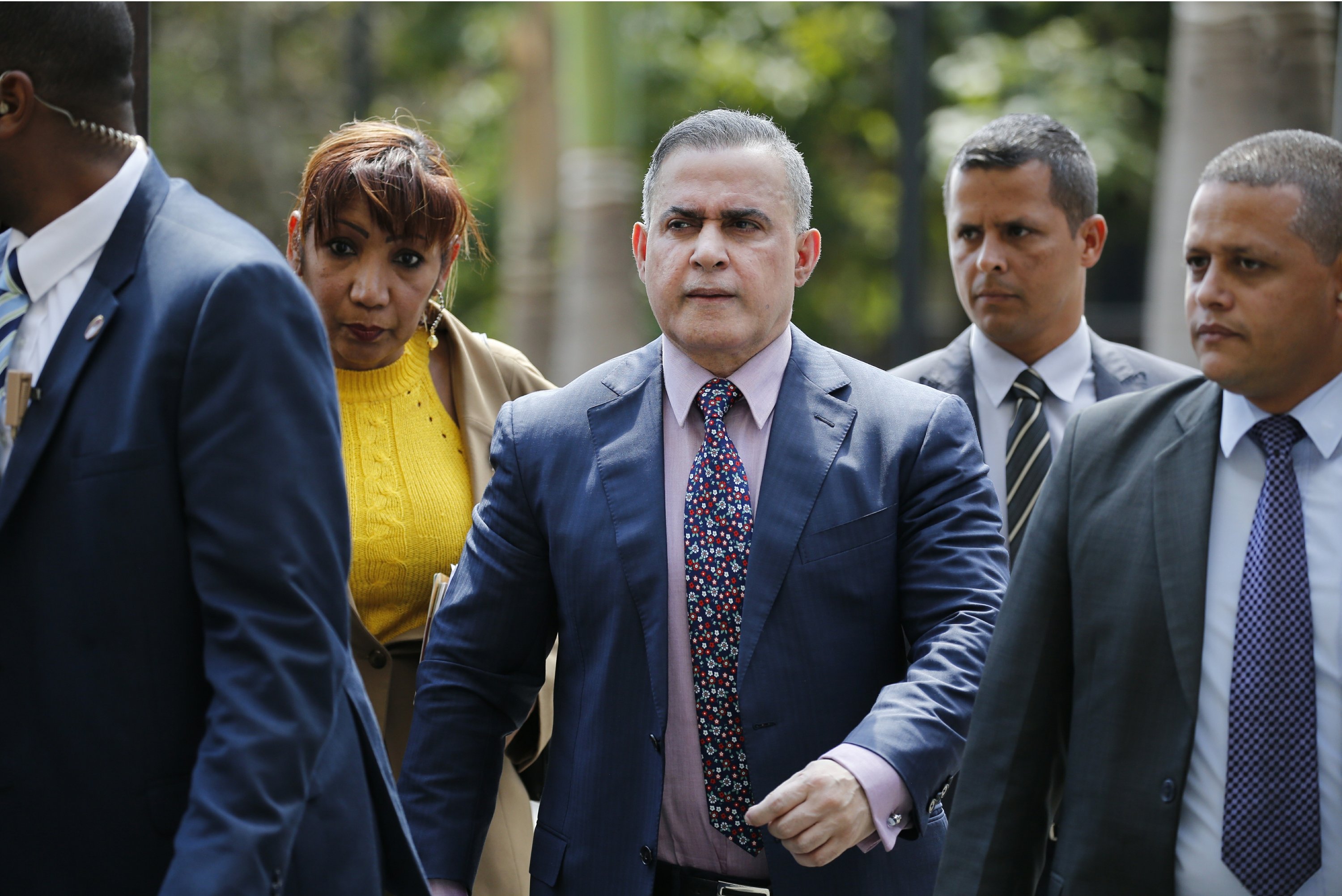 Attorney General Tarek William Saab made his request to the government-stacked Supreme Court, and also asked it to block Guaido’s financial accounts.

Saab didn’t specify what crimes Guaido is being investigated for, but said the probe is tied to unrest sparked by his decision to declare himself interim president last week in a direct challenge to Maduro’s authority.

Guaido said outside the National Assembly building that he’s aware of personal risks, but added, “Venezuela is set on change, and the world is clearly conscious of what’s happening.”

“I don’t underestimate the threat of persecution at the moment,” he added, “but here we are.”

While rights monitors say hundreds of demonstrators have been arrested in recent days, Guaido has so far avoided arrest, while making occasional and brief public appearances. U.S. National Security Adviser John Bolton has warned that any harm to Guaido or the National Assembly he presides over would be considered a “grave assault” and be met with a “significant response,” without specifying.

Opening a case against Guaido comes as international pressure mounts against Maduro’s government from the United States, which earlier in the day handed control over Venezuela’s U.S. bank accounts to Guaido. Russia announced it expects Venezuela to have problems paying its debts.

U.S. Secretary of State Mike Pompeo certified that Guaido, the congressional leader who has declared himself interim president, has authority to take control of bank accounts that Venezuela’s government has in the Federal Reserve Bank of New York or any other U.S.-insured banks.

Pompeo said the certification will “help Venezuela’s legitimate government safeguard those assets for the benefit of the Venezuelan people.”

Guaido has been recognized as the nation’s rightful leader by two dozen nations that contend the re-election of socialist President Nicolas Maduro was a sham, in part because his strongest opponents were barred from running.

The United States, Brazil, Canada, Colombia, Argentina, Peru, Ecuador and Paraguay have officially acknowledged Guaido as the legitimate interim head of Venezuela, while countries including Russia and China back Maduro.

Inside Venezuela, Maduro holds the reins of power with the armed forces still loyal despite an opposition push to lure their support by proposing amnesty for anybody who supports Guaido’s transitional government.

Maduro accuses the United States of leading an open coup to oust him and exploit Venezuela’s oil reserves, the largest in the world.

On Monday, the U.S. hit Venezuela’s state-owned oil company with sanctions aimed at increasing pressure on Maduro to leave office.

Guaido said in an interview with CNN in Spanish on Monday that Venezuela’s opposition-controlled congress had approved a measure asking foreign nations to ensure the country’s assets aren’t “looted” by Maduro.

Storchak said Venezuela owes Russia $3 billion, with repayments twice a year of around $100 million, with the next due in March. Russia also has extensive commercial interests in Venezuela, including state oil company Rosneft’s partnership with Petroleos de Venezuela SA, which was placed under U.S. sanctions Monday.

Kremlin spokesman Dmitry Peskov said the Kremlin shares the view of the Venezuelan government that the sanctions are “illegal” and sees them as a tool of unfair competition on part of the United States.

In Spain, state-owned shipbuilder Navantia said it has called back four Spanish technicians from Venezuela who were readying for final delivery a navy patrol ship sold 14 years ago to the Venezuelan government.

A company spokesman said the recall doesn’t change the shipbuilder’s plan to deliver the vessel, which is called Eternal Commander Hugo Chavez. It is the last of eight similar ships that the former Venezuelan leader bought from Spain in 2005 for $1.4 billion.

The U.S. State Department, meanwhile, said that Americans shouldn’t travel to Venezuela, warning of unrest, the threat of being arbitrarily arrested and of mass demonstrations occurring with little notice.

Opposition leaders have called for anti-government demonstrations this week.

The announcement raises the travel advisory to its highest level, putting Venezuela on a no-travel list that also includes Syria, Afghanistan, Iraq and South Sudan.