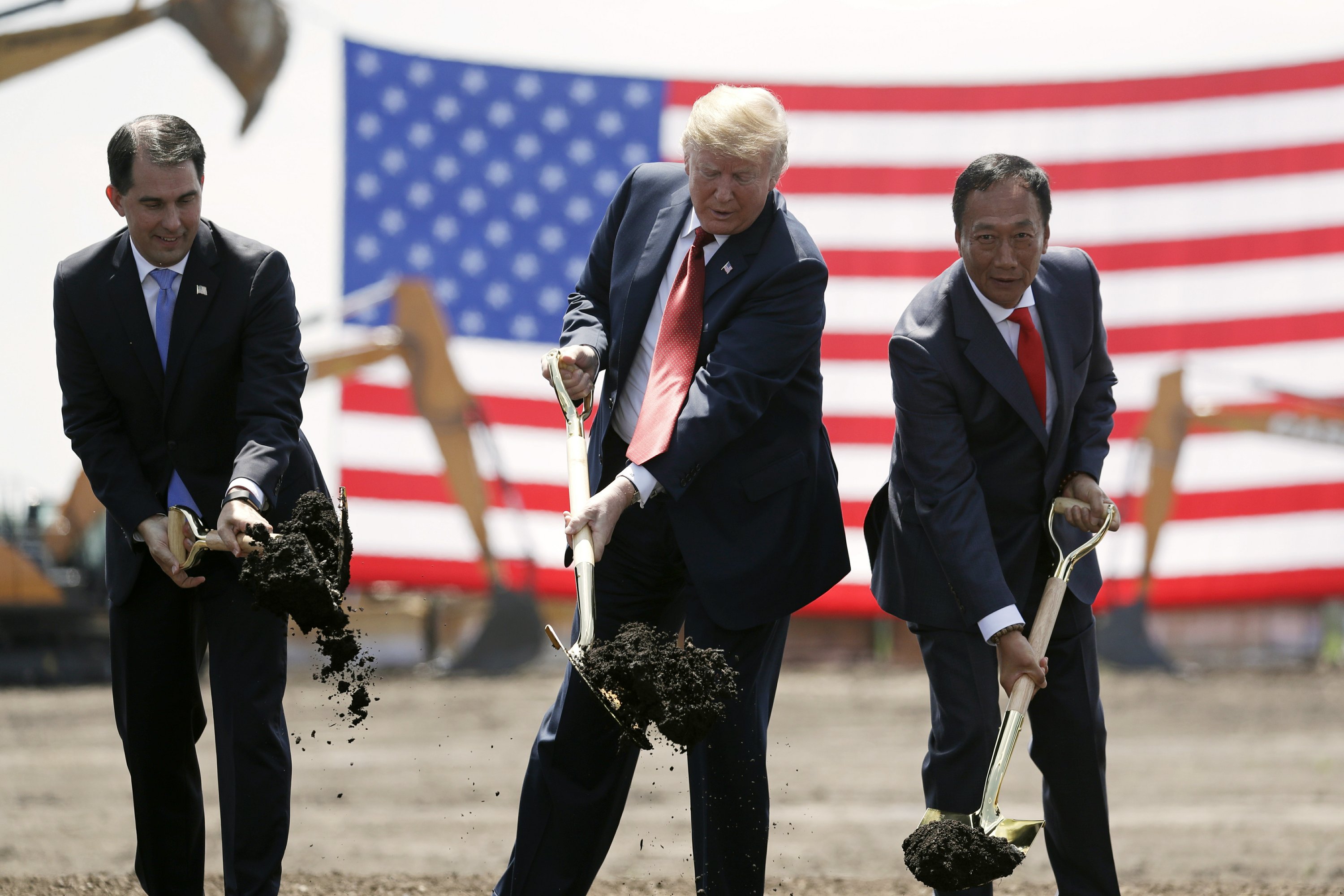 MADISON, Wis. — Foxconn Technology Group said Wednesday it is shifting the focus of its planned Wisconsin campus away from blue-collar manufacturing to a research hub, while insisting it remains committed to creating 13,000 jobs as promised.

The much-ballyhooed facility was heralded by President Donald Trump and former Wisconsin Gov. Scott Walker as a once-in-a-generation opportunity to return manufacturing to the Midwest and the United States. Foxconn, a major supplier to Apple, is the world’s largest contract maker of electronics and China’s largest private employer.

In a statement Wednesday, Foxconn said it remains committed to the project, the creation of 13,000 jobs and “to our long-term investment in Wisconsin.” But because the global market environment that existed when the project was first announced in 2017 has shifted, “this has necessitated the adjustment of plans for all projects, including Wisconsin.”

Foxconn previously said it could invest as much as $10 billion in the project, but did not recommit to that number in Wednesday’s statement.

Woo said a factory would not be built in Wisconsin: “You can’t use a factory to view our Wisconsin investment.”

Instead, Woo said Foxconn wants to create a “technology hub” that would largely consist of research facilities along with packaging and assembly operations. Woo said about three-quarters of the jobs created will be in research and development and design, rather than blue-collar manufacturing jobs.

Foxconn said in its statement that it was broadening its base of investment in Wisconsin to ensure the company and workforce will be positioned for long-term success. That includes focusing on research and development in advanced industrial internet technologies and producing high-tech applications and solutions for industries such as education, medical and health care, entertainment and sports, security, and smart cities, Foxconn said.

The Taiwan-based company billed the massive 20 million-square-foot (1.86 million-square-meter) Wisconsin campus as its first North American manufacturing site for the next generation of liquid crystal display panels to be used in a wide variety of products, including large-screen TVs, self-driving cars, notebooks and other monitors.

Wisconsin state and local governments promised roughly $4 billion to Foxconn, the largest incentive in state history and the biggest promised by a state to a foreign corporation in U.S. history. Foxconn was required to invest $10 billion and create 13,000 jobs to get the full incentives.

The White House had no immediate comment Wednesday. Last summer, Trump highlighted his economic policies at a groundbreaking event for the massive Foxconn complex, which state officials initially said could house 11 football fields.

“America is open for business more than it has ever been open for business. Made in the USA: It’s all happening and it’s happening very, very quickly,” Trump said in June after visiting the Foxconn site. “Today we’re seeing the results of the pro-America agenda. America First, Make America Great Again. Greatest phrase ever used in politics, I suspect.”

Democratic critics, including Evers, said the incentives promised to Foxconn were too rich and questioned whether the company would ever fulfill its job creation and investment promises. They also said the massive plant that was relying on water from nearby Lake Michigan posed serious environmental risks .

“Every step of the way Foxconn has overpromised and under-delivered,” said Democratic Wisconsin Assembly Minority Leader Gordon Hintz in a statement. “This news is devastating for the taxpayers of Wisconsin. We were promised manufacturing jobs. We were promised state of the art LCD production. We were promised a game-changing economic opportunity for our state. And now, it appears Foxconn is living up to their failed track record in the U.S. — leaving another state and community high and dry.”