Save The Children: 7 killed in airstrike on Yemen hospital 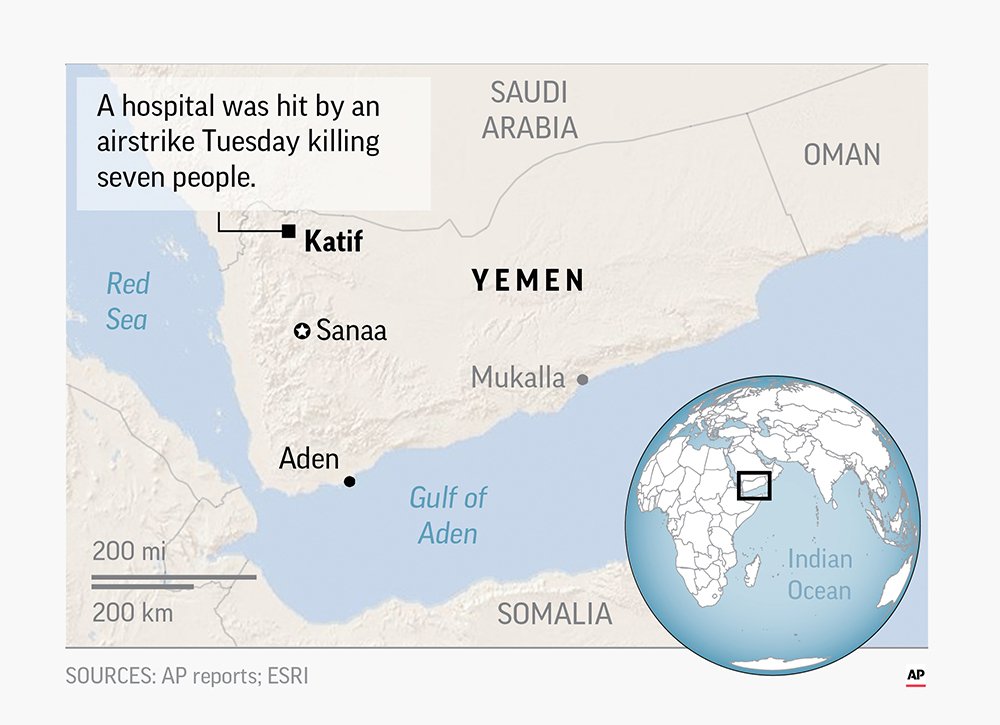 UNITED NATIONS — A hospital in a rural area of northwest Yemen was hit by an airstrike Tuesday killing seven people and wounding eight others, Save the Children said.

The international aid organization, which supports the hospital, said in a statement sent to the Associated Press that four of those killed were children and two adults are unaccounted for.

Save The Children said a missile struck a petrol station near the entrance to Ritaf rural hospital, about 100 kilometers from the city of Saada at 9:30 a.m. local time on Tuesday.

“The missile was said to have landed within 50 meters of the facility’s main building,” it said.

The organization said the hospital had been open for half an hour and many patients and staff were arriving on a busy morning.

Among the dead were a health worker and the worker’s two children and a security guard, it said.

Save the Children, which reported earlier this week that 37 Yemeni children a month had been killed or injured by foreign bombs in the last year, demanded an urgent investigation into the attack.

Helle Thorning-Schmidt, the organization’s chief executive, said: “We are shocked and appalled by this outrageous attack.”

“Innocent children and health workers have lost their lives in what appears to been an indiscriminate attack on a hospital in a densely populated civilian area,” she said. “Attacks like these are a breach of international law.”

Thorning-Schmidt said the hospital is one of many Save the Children supports in Yemen, “but time after time, we see a complete disregard by all warring parties in Yemen for the basic rules of war.”

The conflict in Yemen began with the 2014 takeover of the capital, Sanaa, by Iranian-backed Houthi Shiite rebels, who toppled the government of Abed Rabbo Mansour Hadi.

A Saudi-led coalition allied with Hadi’s internationally recognized government has been fighting the Houthis since 2015.

Saudi-led airstrikes have hit schools, hospitals and wedding parties and killed thousands of Yemeni civilians. The Houthis have fired long-range missiles into Saudi Arabia and targeted vessels in the Red Sea.

The fighting in the Arab world’s poorest country has killed thousands of civilians, left millions suffering from food and medical care shortages, and pushed the country to the brink of famine.

Thorning-Schmidt called for an immediate suspension of arms sales to the warring parties and diplomatic pressure to end the conflict.

“We must stop this war on children,” she said.