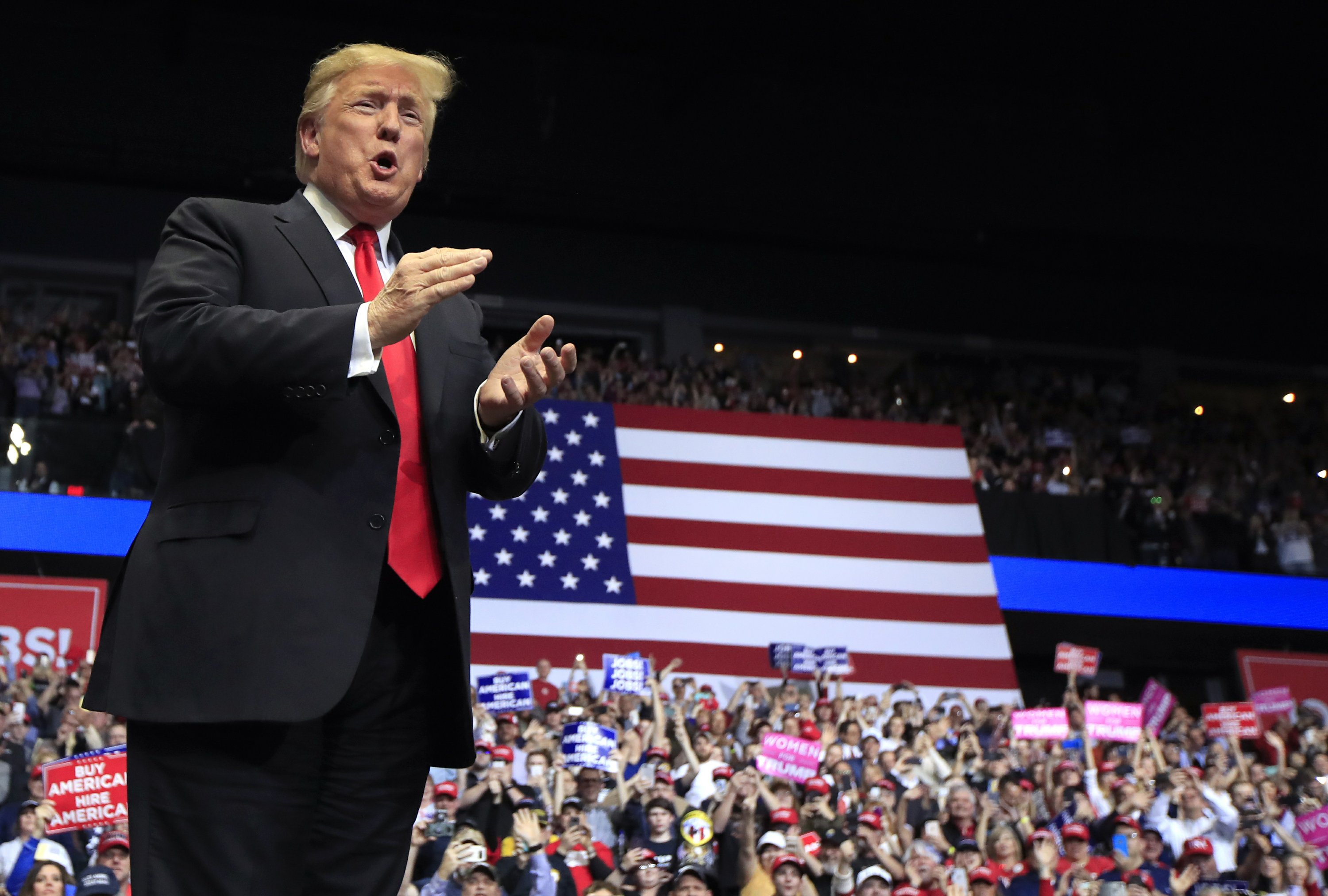 Here’s a look at rhetoric from his Grand Rapids, Michigan rally, on Thursday night as well as his remarks leading up to it:

THE FACTS: No. He won 304 to Hillary Clinton’s 227, according to an Associated Press tally of the electoral votes in every state. He routinely misstates the result.

TRUMP: “We did really well with women.” — rally.

THE FACTS: Not that well. He actually lost the women’s vote.

About 54 percent nationally voted for Democrat Hillary Clinton, according to exit polls, compared with Trump’s 41 percent. He won 52 percent of white women, according to those polls.

TRUMP: “After three years of lies and smears and slander, the Russia hoax is finally dead. The collusion delusion is over. The special counsel completed its report and found no collusion and no obstruction. …Total exoneration, complete vindication.” — rally.

THE FACTS: Mueller did not vindicate Trump in “total” in the Russia probe.

Mueller’s exact words in the report, as quoted by Attorney General William Barr, say: “While this report does not conclude that the President committed a crime, it also does not exonerate him.”

The four-page summary by Barr released Sunday notes Mueller did not “draw a conclusion — one way or the other — as to whether the examined conduct constituted obstruction,” but rather set out evidence for both sides, leaving the question unanswered of whether Trump obstructed justice. Barr wrote in the summary that ultimately he decided as attorney general that the evidence developed by Mueller was “not sufficient” to establish, for the purposes of prosecution, that Trump committed obstruction.

Barr’s summary also notes that Mueller did not find that the Trump campaign conspired or coordinated with Russia to tip the 2016 presidential election in Trump’s favor. To establish a crime, Mueller must generally meet a standard of proving an offense beyond a reasonable doubt. The summary did not clear the president of improper behavior regarding Russia but did not establish that “he was involved in an underlying crime related to Russian election interference,” Mueller said in a passage from the report quoted by Barr.

The summary signed by Barr gave the bottom line only as he and his deputy saw it. Democrats are pushing for release of Mueller’s full report, which is more than 300 pages. Barr is expected to release a public version of the document in the coming weeks.

TRUMP: “The Republican Party will become the party of great health care. … Republicans want you to have an affordable plan that’s just right for you.” — rally.

TRUMP: “If the Supreme Court rules that Obamacare is out, we will have a plan that’s far better than Obamacare.” — remarks Wednesday to reporters.

THE FACTS: Republicans may aspire to great health care but they don’t have a comprehensive plan for it. And there’s no indication that the White House, executive branch agencies like Health and Human Services, and Republicans in Congress are working on one.

Trump’s recent budget called for repealing “Obamacare” and setting hard limits on federal spending for Medicaid, which covers low-income people. Some Republicans argue that would be better, because the federal government would create a new program of health care grants to states. But when the nonpartisan Congressional Budget Office analyzed similar proposals a couple of years ago, it estimated such changes would result in deep coverage losses, not to mention weaker insurance protections for people with pre-existing medical conditions.

Trump’s budget also called for hundreds of billions of dollars in Medicare cuts to hospitals and other service providers, a nonstarter with lawmakers in Congress worried about re-election next year.

The Supreme Court has upheld the health care law twice in previous challenges. The five justices who first upheld it in 2012 are still on the court.

Congressional Republicans are generally trying to steer away from Obamacare spats. Some are trying to focus on areas where they might find common ground with Democrats and the president, such as reducing prescription drug costs.

THE FACTS: He’s not protecting health coverage for patients with pre-existing medical conditions. In fact, the Trump administration is pressing in court for full repeal of the Affordable Care Act — including provisions that protect people with pre-existing conditions from health insurance discrimination.

Trump and other Republicans say they’ll have a plan to preserve those safeguards, but the White House has provided no details. And it’s a stretch to think they could get a Republicans-only plan passed through Congress with the House under Democratic control.

Meanwhile House Speaker Nancy Pelosi has unveiled her own plan to shore up and expand the ACA, which would make many more middle-class people eligible for subsidies to help pay their premiums, and also make the subsidy amounts more generous.

Former President Barack Obama’s health care law requires insurers to take all applicants, regardless of medical history, and patients with health problems pay the same standard premiums as healthy ones. Bills supported in 2017 by Trump and congressional Republicans to repeal the law could have pushed up costs for people with pre-existing conditions.

TRUMP: “We’re bringing a lot of those car companies back. They’re pouring back in.” —rally.

TRUMP: “We’re opening up car plants in Michigan again for the first time in decades. They’re coming in, really pouring in. … And this has been happening pretty much since I’ve been president. It’s really amazing what’s going on … We’ve brought back so much industry, so many car companies to Michigan, so we’re very happy.” — remarks while departing for Michigan.

THE FACTS: There is very little truth in those remarks.

The only automaker announcing plans to reopen a plant in Michigan is Fiat Chrysler, which is restarting an old engine plant to build three-row SUVs. It’s been planning to do so since before Trump was elected. GM is even closing two Detroit-area factories: one that builds cars and another that builds transmissions.

Automakers have made announcements about new models being built in the state, but no other factories have been reopened. Ford stopped building the Focus compact car in the Detroit suburb of Wayne last year, but it’s being replaced by the manufacture of a small pickup and a new SUV. That announcement was made in December 2016, before Trump took office.

GM, meantime, is closing factories in Ohio and Maryland.

Trump can plausibly claim that his policies have encouraged some activity in the domestic auto industry. Corporate tax cuts freed more money for investment and potential tariff increases on imported vehicles are an incentive to build in the U.S.

But automakers have not been “pouring in” at all, as he persistently claims, and when expansion does happen, it’s not all because of him.

Fiat Chrysler has been planning the SUVs for several years and has been looking at expansion in the Detroit area, where it has unused building space and an abundant, trainable automotive labor force.

Normally it takes at least three years for an automaker to plan a new vehicle, which is the case with the three-row Jeep Grand Cherokee and the larger Wagoneer and Grand Wagoneer SUVs that will fill the restarting Detroit-area plant and an existing one. Several years ago then-CEO Sergio Marchionne said the Wagoneer would be built in the Detroit area.

Detroit automakers usually build larger vehicles in the U.S. because the profit margins are high enough to cover the higher wages paid there versus Mexico or another lower-cost country.

The diversity visa lottery program is run by the U.S. government, not foreign governments. Other countries do not get to sort through their populations looking for bad apples to put in for export to the U.S. Citizens of qualifying countries are the ones who decide to bid for visas under the program. Trump routinely blames foreign states.

The program requires applicants to have completed a high school education or have at least two years of experience in the last five years in a selection of fields. Out of that pool of people from certain countries who meet those conditions, the State Department randomly selects a much smaller pool of winners. Not all winners will have visas ultimately approved, because they still must compete for a smaller number of slots by getting their applications in quickly. Those who are ultimately offered visas still need to go through background checks, like other immigrants.

The lottery is extended to citizens of most countries, except about 20. The primary goal is to diversify the immigrant population by creating slots for underrepresented parts of the world.

TRUMP: “They’ve been trying to get VA Choice for over 40 years. Couldn’t do it. I got it. We signed it six months ago.” — rally.

THE FACTS: Not true. He’s not the first president in 40 years to get Congress to pass a private-sector health program for veterans; he expanded it. Congress first approved the program in 2014 during the Obama administration. The program currently allows veterans to see doctors outside the VA system if they must wait more than 30 days for an appointment or drive more than 40 miles (65 kilometers) to a VA facility.

Now they are to have that option for a private doctor if their VA wait is only 20 days (28 for specialty care) or their drive is only 30 minutes.

TRUMP: “Instead of waiting online for 1 day, 1 week, 2 months, …they now go outside, they see a private doctor, we pay the bill, they get better quickly.” — rally

THE FACTS: Also not right. Veterans still must wait for weeks before they can get private care outside the VA system.

The program currently allows veterans to see doctors outside VA if they must wait more than 30 days for an appointment or drive more than 40 miles (65 kilometers) to a VA facility. Under new rules to take effect in June, veterans are to have that option for a private doctor if their VA wait is only 20 days (28 for specialty care) or their drive is only 30 minutes.

But the expanded Choice eligibility may do little to provide immediate help. That’s because veterans often must wait even longer for an appointment in the private sector. Last year, then-Secretary David Shulkin said VA care is “often 40 percent better in terms of wait times” compared with the private sector. In 2018, 34 percent of all VA appointments were with outside physicians, down from 36 percent in 2017.

At a hearing Tuesday, the top health official at VA, Dr. Richard Stone, described the start of the expanded Choice program to “almost be a non-event,” in part because wait times in the private sector are typically longer than at VA.

The VA also must resolve long-term financing because of congressional budget caps after the White House opposed new money to pay for the program. As a result, lawmakers could be forced later this year to limit the program or slash core VA or other domestic programs.