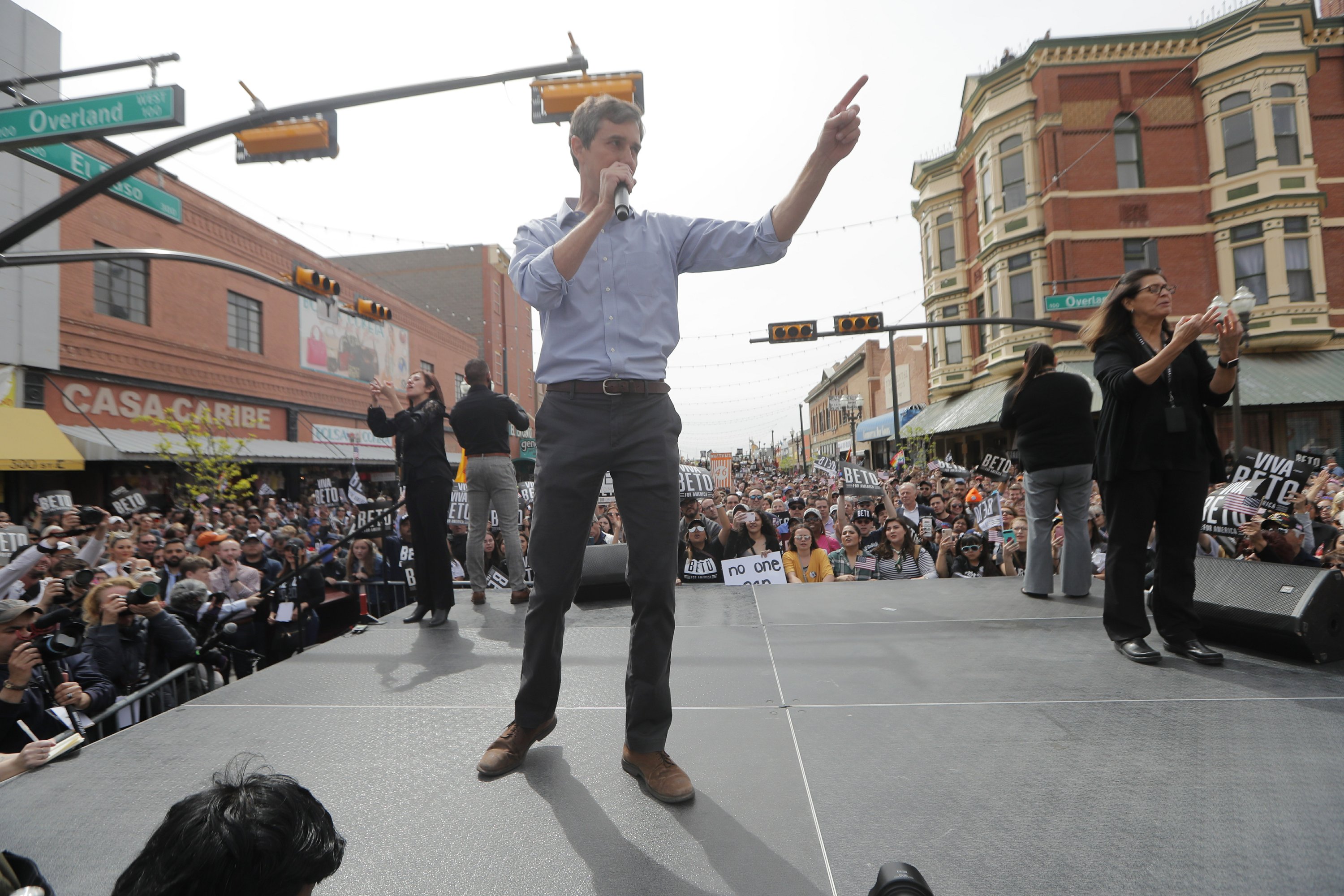 EL PASO, Texas — Democratic presidential candidate Beto O’Rourke declared that immigrants make the country safer as he staged rallies across Texas on Saturday to formally kick off his 2020 White House bid, looking to shore up his deeply conservative home state and champion the U.S.- Mexico border at a time when President Donald Trump has threatened to shut it.

The former congressman, who represented El Paso for three House terms until last year, began the day addressing 1,000-plus supporters in his hometown, across the border from Ciudad Juarez, Mexico. He was holding an event at historically black Texas Southern University in Houston later, before heading to Austin for a third rally in the shadow of the red-granite state Capitol.

“We have learned not to fear our differences, but to respect and embrace them,” he told a crowd that waved small American flags and black-and-white signs reading “Viva Beto” while often interrupting their candidate to chant his first name.

In a series of tweets Friday, Trump warned he could close the country’s southern border next week “if Mexico doesn’t immediately stop ALL illegal immigration coming into the United States.” In later comments to reporters he added: “We’ll keep it closed for a long time. I’m not playing games.”

O’Rourke has made promoting the U.S.-Mexico border as culturally rich and economically powerful the centerpiece of his campaign and spoke on a downtown street corner a few blocks from the border.

O’Rourke entered the race March 14 and already has visited nine states, but had promised to return to El Paso for an official kickoff.

As he has previously, he renewed calls to work with Republicans and Democrats, saying “before anything else, we are Americans first” and prompting chants of “USA! USA!” But he also made bolder predictions than in the past, saying that if his campaign can bring people from across the ideological spectrum together he can top the rest of the crowded Democratic 2020 presidential field and “defeat Donald Trump in November.”

A small but vocal group of Trump supporters had other ideas, gathering a few blocks away from the event to shout anti-O’Rourke sentiments for hours.

O’Rourke represented El Paso in Congress for six years, but gave up his seat while nearly upsetting Texas Republican Sen. Ted Cruz in November. The Democrat who replaced him in the House, Rep. Veronica Escobar, welcomed those on hand to the “beautiful, magical, safe and secure U.S.-Mexico border,” adding, “When the border sends America her people, we are sending them our best in Beto O’Rourke.”

Amy O’Rourke, who has largely avoided the spotlight since her husband began running for president, gave a short speech too, telling the crowd, “Listening to people is what gives Beto strength. It fuels him and it gives him context (with) which he can think about policies and the things he wants to do for this great country.”

He also renewed his support for a House proposal called “Medicare for America,” which he says will guarantee universal health care coverage while allowing people who like getting insurance through their employer to continue doing so.

Texas hasn’t elected a Democrat to statewide office in 25 years. But O’Rourke came within 3 percentage points of topping Cruz, and national Democrats are hoping that its booming Hispanic population and large numbers of new residents moving in from other states could keep Texas close in 2020 — potentially reshaping the electoral college. California Sen. Kamala Harris dew a large crowd last weekend when she too visited Texas Southern University.

“This state and its 38 electoral votes count like they’ve never counted before,” O’Rourke said Saturday. “All of us matter.”