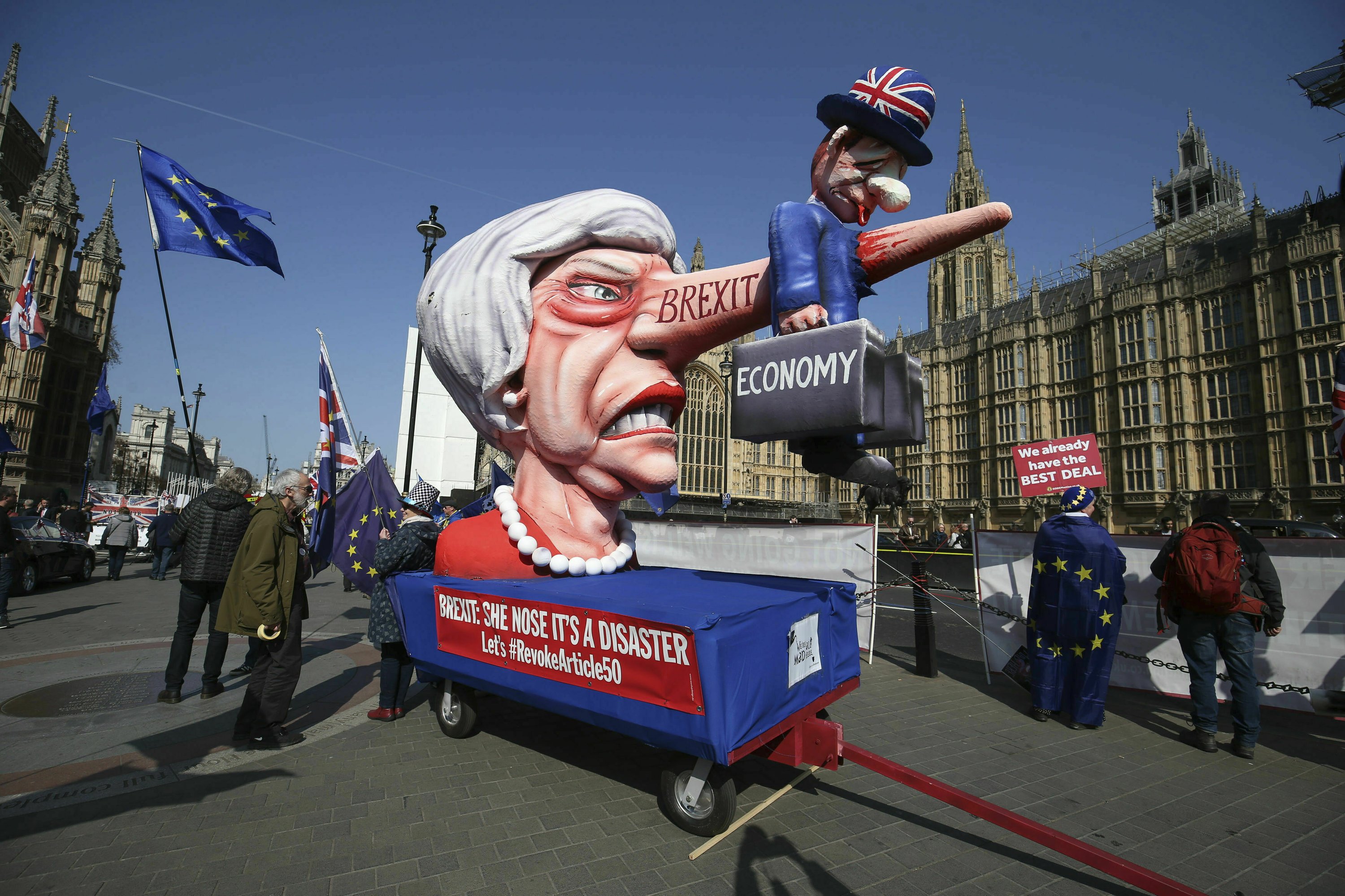 LONDON — The alarms are flashing, the cliff-edge is coming closer — but can Britain avoid tumbling out of the European Union?

After lawmakers rejected the government’s Brexit deal on three occasions, and twice failed to agree on any other option, the U.K. has just 10 days to come up with a new plan or crash out of the EU.

Michel Barnier, who has been the chief Brexit negotiator for the other 27 EU countries, has warned that a ‘no-deal’ Brexit is “likely” because of Britain’s political impasse.

Earlier this month, the EU agreed to postpone the original Brexit date of March 29, but gave Britain only until April 12 to come up with a new plan and seek a further extension, or leave without an agreement or a transition period to smooth the way.

Most politicians, economists and business groups think leaving the world’s largest trading bloc without an agreement would be damaging for the EU and disastrous for the U.K. It would lead to tariffs imposed on trade between Britain and the EU, customs checks that could cause gridlock at ports and which could spark shortages of essential goods.

A hard core of Brexiteer legislators in May’s Conservative Party dismiss this as “Project Fear” and argue for what they call a “clean Brexit.” But most lawmakers are opposed to leaving without a deal. Parliament has voted repeatedly to rule out a ‘no-deal’ Brexit — but it remains the default position unless a deal is approved, Brexit is canceled or the EU grants Britain another extension.

May says the only way to guarantee Britain does not leave the EU without a deal is for Parliament to back her deal, which lawmakers have already rejected three times.

Barring that, Parliament could try to take drastic action such as toppling the government or legislating to force it to avoid ‘no-deal’ — though these are risky and tricky options.

After almost two years of negotiations, Britain and the EU struck a divorce deal in November, laying out the terms of the departure from the bloc and giving a rough outline of future relations.

But it has been roundly rejected by lawmakers on both sides of the Brexit divide. Pro-Brexit lawmakers think it keeps Britain too closely tied to EU rules. Pro-EU legislators argue it is worse than the U.K.’s current status as an EU member.

Parliament has thrown it out three times, although the latest defeat, by 58 votes, was the narrowest yet. It was rejected even after May won over some pro-Brexit lawmakers by promising to quit if it was approved.

May is considering one last push this week, arguing that Parliament’s failure to back any other deal means her agreement is the best option available. But the odds of success look long.

On Monday, Parliament voted on four alternative proposals to May’s rejected deal after lawmakers seized control of the schedule from the government.

None got a majority, but the votes revealed a solid block of support for a “soft Brexit” that would maintain close economic ties between Britain and the EU. A plan to keep the U.K. in an EU customs union, ensuring seamless trade in goods, was defeated by just three votes.

May has ruled those options out, because sticking to EU trade rules would limit Britain’s ability to forge new trade deals around the world.

But tweaking her deal to adopt a customs union could gain May valuable votes in Parliament. It also would likely be welcomed by the EU and would allow Britain to leave the bloc in an orderly fashion in the next few months.

However, it would also cause a schism in the Conservative Party, sparking the potential resignation of pro-Brexit government ministers.

Parliament also narrowly rejected a proposal for a new referendum on whether to leave the EU or remain.

The proposal for any Brexit deal to be put to public vote in a “confirmatory referendum” was defeated by 12 votes. It was backed by opposition parties, plus some of May’s Conservatives — mainly those who want to stay in the bloc.

Her government has ruled out holding another referendum on Britain’s EU membership, saying voters in 2016 made their decision to leave.

But with divisions in both Parliament and in May’s Cabinet, handing the decision back to the people in a new plebiscite could be seen as the only way forward.

The alternative to a “no-deal” departure is to delay Brexit for at least several months, and possibly more than a year, to sort out the mess. The EU is frustrated with the impasse and has said it will only grant another postponement if Britain comes up with a whole new Brexit plan.

The bloc is reluctant to have a departing Britain participate in the May 23-26 European parliament elections, but that would have to be done if Brexit is delayed. Still, EU Council President Donald Tusk has urged the bloc to give Britain a Brexit extension if it plans to change course.

A long delay raises the chances of an early British election, which could rearrange Parliament and break the deadlock.