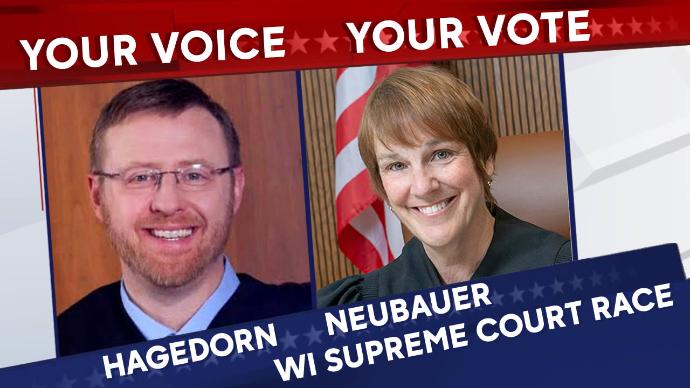 In what was supposed to be an easy win for Democrats, GOP-backed Appeals Court Judge Brian Hagedorn stunned liberals by declaring victory against Chief Appeals Court Judge Lisa Neubauer in the election for Wisconsin’s newest Supreme Court justice. Hagedorn led Neubauer 50.25%-49.75% as of Wednesday, with 100% of precincts reporting. His margin of victory, half of one percentage point, means that Neubarger can request a recount and the Associated Press has not yet declared a winner.

Yet because the margin is greater than 0.25 percentage points, Neubarger would have to fund the recount herself, not the government, and her campaign has yet to request a recount. The election, while nominally non-partisan, is a tremendous victory for the former Republican aide over the ex-Democrat, and bodes well for Republican chances of winning the state in 2020.

Neubarger was expected to win by “mid to high single digits,” as one GOP operative told the National Review.  Liberal groups had outspent conservative ones 14-1, until conservative groups narrowed the gap in the closing weeks. And while Donald Trump won the state in 2016, Democrats had won most state elections in 2018-19.

Hagedorn’s vote lead may signal that Republicans can hold Wisconsin in 2020, and therefore secure Trump’s reelection. Trump narrowly won Wisconsin, Pennsylvania, and Michigan in 2016. Democrats swept those three states in 2018, and if the Democrats win those three states in 2020, while holding onto all of the states that Hillary Clinton won in 2016, they will win the presidency. Trump, though, only needs to win one of those states, assuming he holds onto his other states from 2016.

The Wisconsin Supreme Court election previewed the 2020 U.S. presidential election in a key way: the importance of religious issues. Hagedorn was attacked as an anti-LGBT bigot for his Christian views.  He co-founded a Christian school in the Milwaukee suburbs that requires teachers, in their private lives, to follow Christian teachings regarding sex and gender identity. He has been involved with Alliance Defending Freedom, a law firm that has defended religious civil rights — including in the Masterpiece Cakeshop case — but who has been repeatedly smeared by the left as a “hate group.” These views scared away traditionally-Republican business groups from backing Hagedorn, including the trade group representing Wisconsin realtors.

Meanwhile, Neubauer was strongly backed by Democrats. Her ties to Democrats include a husband who was the former chairman of the Democratic Party in Wisconsin and a daughter who is a Democratic state representative.