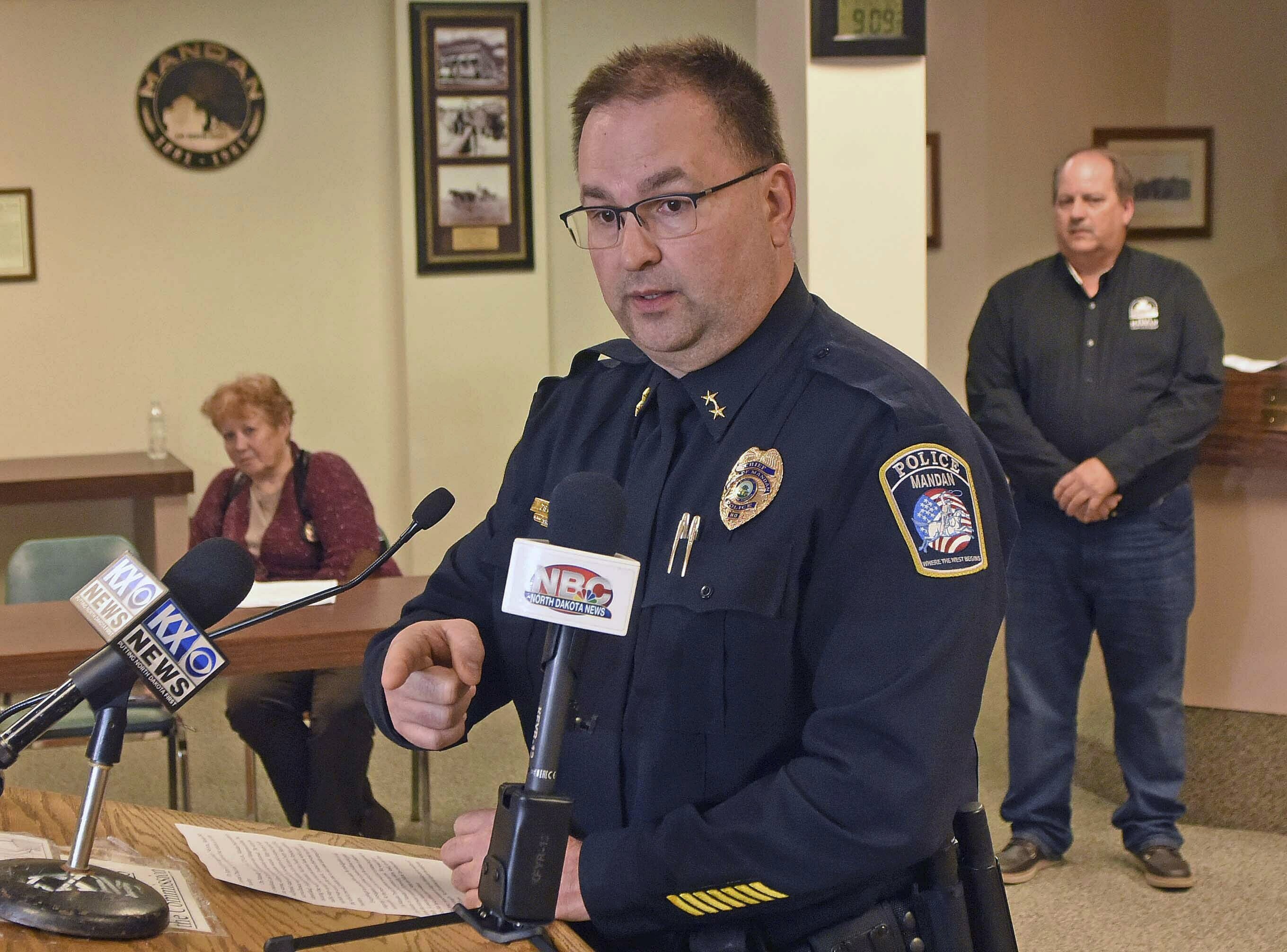 MANDAN, N.D. — Police following evidence from surveillance video arrested a 44-year-old man Thursday in the slayings of four people at a property management business, just days after the discovery of their bodies shook a North Dakota town.

Mandan Police Chief Jason Ziegler announced the arrest at a news conference Thursday night, saying police don’t yet have a motive but noting that the suspect lived on property managed by the company, RJR Maintenance and Management.

Ziegler said the suspect lived in Washburn, a town about 35 miles (56 kilometers) north of Mandan, and was arrested without incident. He had not been formally charged but was being held on suspicion of four counts of felony murder.

“Evidence discovered on (the suspect) and in the vehicle provided probable cause to place (him) under arrest for the murders,” Ziegler said. He did not elaborate on the evidence.

The dead were identified earlier this week as RJR co-owner Robert Fakler, 52, and employees Adam Fuehrer, 42; Lois Cobb, 45; and William Cobb, 50. The Cobbs were married.

Ziegler also revealed Thursday night that the four had been shot or stabbed.

Police had released little information about their investigation in the days following the discovery of the bodies after authorities responded to a medical call Monday. Homicides are unusual in Mandan, a town of about 22,000 just across the Missouri River from the state capital of Bismarck that hadn’t had a slaying since 2016 — and had only three in the past six years.

“It’s been a difficult week for everyone involved,” Mayor Tim Helbling said.

A court appearance was likely Friday. Felony murder carries a maximum punishment of life in prison without parole. North Dakota does not have the death penalty.

The suspect had no criminal history immediately evident in state or federal court in North Dakota.

Ziegler said police are not looking for anyone else and were focusing on “putting everything together so we can get prosecution on this and bring (the suspect) to justice.”

He added: “Just because we’ve got him … this is far from over. Now comes the long process of prosecution.”

It wasn’t immediately clear if the man had an attorney representing him.

Police had said the attack “was specific to the victims,” and they didn’t feel the public was in danger. Ziegler declined to say whether all four were targeted.

Earlier Thursday, police declined to release details of a 911 call that alerted authorities to the slayings. The Associated Press and other media outlets asked for audio and a transcript of the 911 call, but police denied the requests, citing a provision of the state’s open records law that allows authorities to withhold such information during an active investigation.

The company’s website says it has handled commercial and residential properties in the area for more than 20 years. Its services include collecting rent for landlords, paying mortgages, re-renting apartments, building and grounds maintenance, lawn care and snow removal. It also rents out storage units.

The RJR building is somewhat isolated despite its location in a business district near a busy main road known as The Strip. A large empty lot sits in the front, a golf course in back and a soccer complex to one side.

A combined memorial service for the victims was planned for Tuesday at Bismarck Community Church, according to Eastgate Funeral and Cremation Service.