With Israel election in sight, Netanyahu stumps with Trump 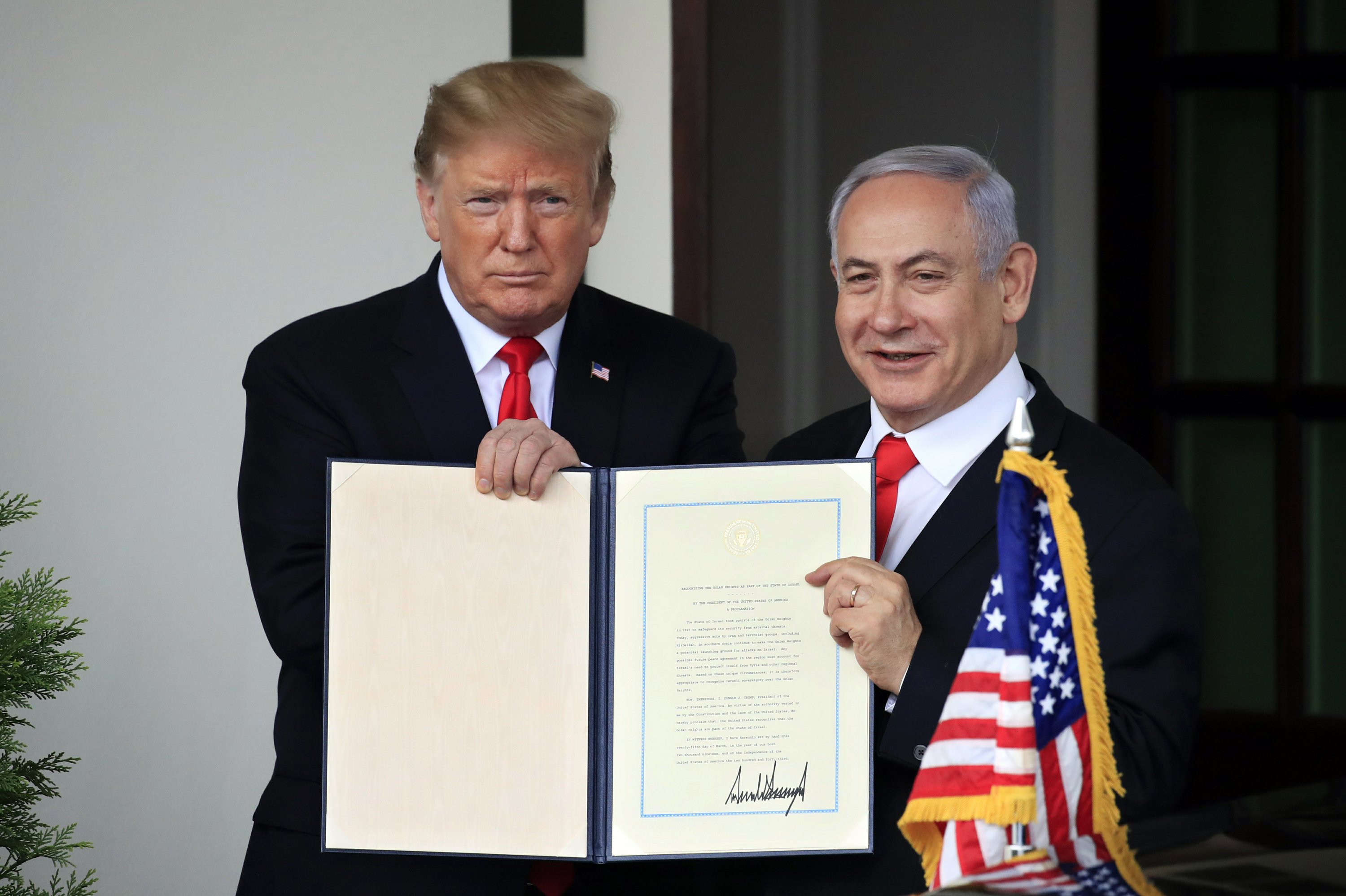 JERUSALEM — In a tight race for re-election, Israel’s prime minister has gotten a welcome lift from his friend in the White House.

Drawing inspiration from Trump, Netanyahu has dismissed a corruption case against him as a “witch hunt” and his Likud party has launched a weekly webcast to counter what it claims is “fake news” broadcast by mainstream media.

For Netanyahu, the close ties with Trump are a welcome change after eight frosty years with the Obama administration, which repeatedly clashed with the prime minister over his policies toward the Palestinians and his opposition to the nuclear agreement with Iran.

Upon taking office two years ago, Trump quickly reversed course and established a tight relationship with Netanyahu. This has yielded benefits for Netanyahu on the campaign trail.

In the run-up to Tuesday’s vote, Netanyahu has hosted Secretary of State Mike Pompeo, visited Trump in the White House and received American recognition of Israeli sovereignty over the Golan Heights, which Israel seized from Syria during the 1967 Mideast war.

Those moves are seen as an unspoken U.S. endorsement of Netanyahu, and in Israel, having close ties with whoever occupies the White House is seen as a major asset.

Trump enjoys strong support among Israelis, 69% of whom expressed confidence in the president’s ability “to do the right thing regarding world affairs,” according to a Pew Research Center poll published in October.

That support largely springs from Trump’s recognition of Jerusalem as Israel’s capital and the opening of the U.S. Embassy there. Trump’s withdrawal from the Iran nuclear deal and his decision to slash U.S. aid to the Palestinians are also popular among Israelis.

“Benjamin Netanyahu, there’s nobody like him,” Trump says in a clip taken from a 2013 video. Building-sized billboards in Jerusalem and Tel Aviv show the two leaders shaking hands.

A poll conducted by the Israel Democracy Institute found that 63% of Israelis “believe that Netanyahu’s standing in the current election campaign will be strengthened by the U.S. recognition” of the annexation of the Golan Heights. The survey interviewed 603 people and had a margin of error of 4.1 percentage points.

More than 70 percent of American Jews voted against Trump, and many express unease about U.S.-Israel relations becoming too closely associated with the friendship between two polarizing leaders.

The April 9 election is widely seen as a referendum on Netanyahu’s decade-long rule, and his campaign is using the relationship with Trump to portray him as a respected statesman with personal ties to world leaders.

In an Instagram video posted Wednesday, Netanyahu touts his administration’s “unprecedented diplomatic advancements,” foremost among them “strengthening relations with the United States,” but also closer ties with Russia, China, India, Japan and Brazil.

On Thursday, Netanyahu paid a surprise visit to Russia, where President Vladimir Putin announced his country’s instrumental role in recovering the remains of an Israeli soldier who went missing in action in Lebanon in 1982.

The return of the soldier’s remains, along with a visit this week by Brazil’s president, Jair Bolsonaro, has given Netanyahu another diplomatic victory late in the campaign.

Netanyahu seeks a fourth consecutive term in office as Israel’s leader. If re-elected, he will become the country’s longest serving prime minister, outstripping its founding father, David Ben Gurion. The prime minister’s campaign has steamed ahead despite Attorney General Avichai Mandelblit’s recommendation last month that Netanyahu be indicted for a series of corruption charges.

With less than a week to go, opinion polls give Netanyahu a slight edge in the race. But he faces major opposition from his former army chief of staff, Benny Gantz.

Sounding much like Trump, Netanyahu has attacked the press, branded Gantz and other opponents as “leftists” and questioned Gantz’s mental health.

A video released by Netanyahu in late March said members of Gantz’s party signed a petition to boycott a 2015 meeting with Trump, “the president who moved the embassy to Jerusalem, recognized the Golan Heights as Israeli territory, and left the nuclear agreement with Iran. Shame!”

Gantz is running along with two other former army chiefs of staff, which gives their Blue and White party security chops to rival those of Netanyahu.

Reuven Hazan, a political scientist at the Hebrew University of Jerusalem, said the Blue and White party’s unassailable military credentials have forced Netanyahu to stump on his foreign policy accomplishments rather than in his traditional role as “Mr. Security.”

“We are a tiny, tiny country but our leader is on very good terms with the president of the United States, the president of Russia, and the president of Brazil,” Hazan said. “In other words, he’s using his relative advantage to say ‘if you don’t elect me, whoever replaces me will not be able to play in the international league that I have raised Israel to and we will drop significantly,’” Hazan said.