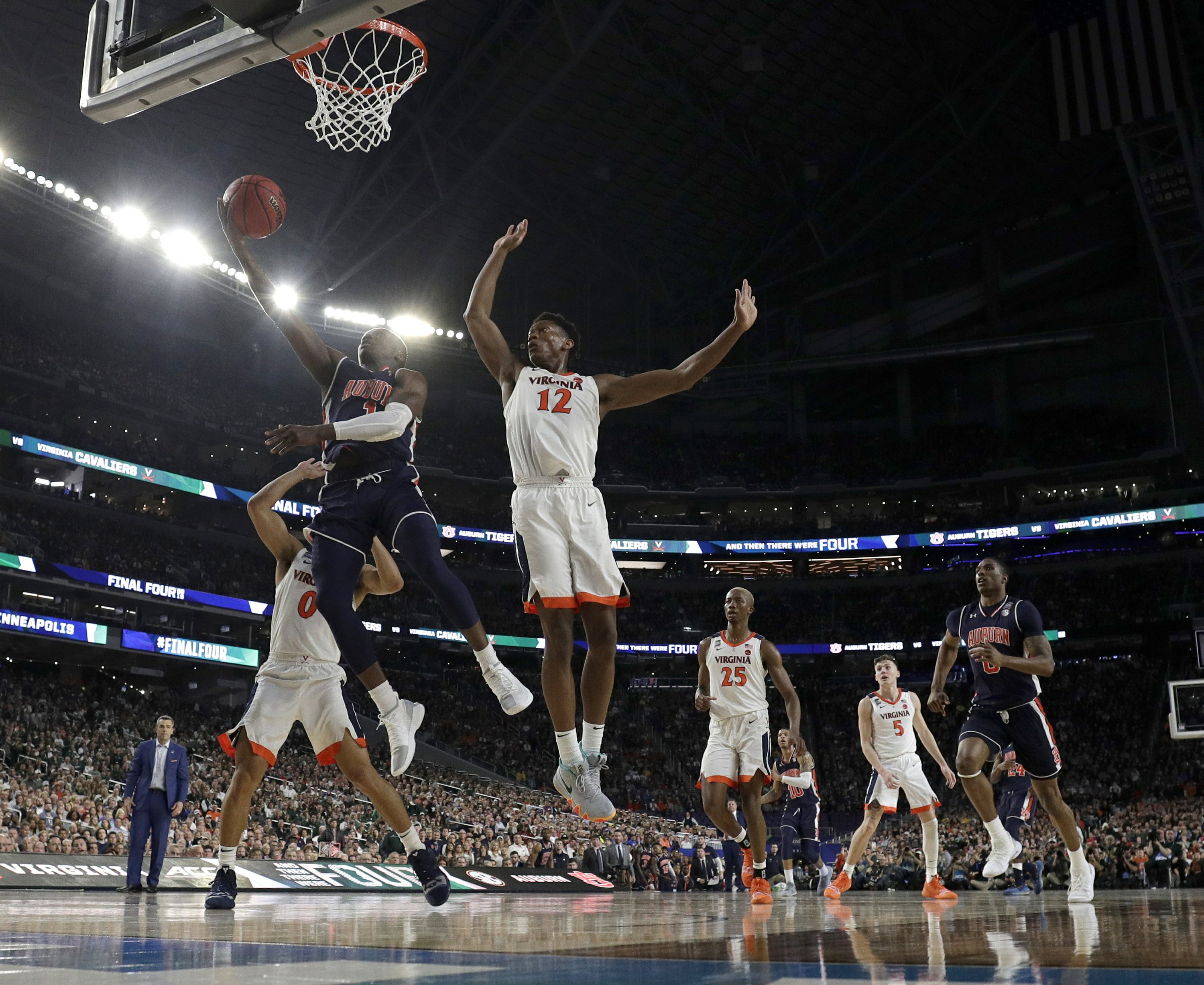 MINNEAPOLIS — The Latest on the Final Four of the NCAA Tournament (all times local):

The first eight points of the second half belongd to Virginia.

So does the pace of play. And the rebounding battle. And the momentum. And most importantly, the lead. The Cavaliers have edged ahead 36-31 with 14 1/2 minutes to go in the national semifinals.

The Tigers missed their first eight shots to start the second half. They’ve been particularly bad from the 3-point arc, where Bryce Brown’s latest miss left them 3 for 19 from 3.

Auburn coach Bruce Pearl dismissed any concerns about his sharpshooting team’s ability to make shots in a football stadium, saying Thursday that the rims were “soft.” They haven’t been so far.

The second half between Auburn and Virginia is under way with a national title berth at stake.

The Tigers were just 3 of 14 from beyond the 3-point arc in the first half, though they still managed to take a 31-28 lead into the locker room. A big reason for that was their ability to get to the rim against a Virginia defense that is designed to prevent just that.

The Cavaliers are leaning on Ty Jerome, who had 13 points in the first half.

Virginia center Jack Salt played only 2 minutes in the first half because of foul trouble, and that meant a short bench for coach Tony Bennett. Salt should figure more prominently in the second half.

Auburn is 20 minutes away from the national title game after what might go down as one of the fastest first halves in Final Four history.

The Tigers lead Virginia 31-28 at the break. But the teams burned through the first half in less than 40 minutes of real time, thanks in part to seven total turnovers and nine total fouls.

The first 10 minutes of the Final Four matchup between Auburn and Virginia is going about as expected: The Tigers are throwing up 3-pointers and the Cavaliers are slowing the pace.

The Cavaliers figured to have an advantage in the paint with Auburn missing 6-foot-8 forward Chuma Okeke to a knee injury. But the 6-10 Salt is on the bench, where he does Virginia no good.

Meanwhile, Auburn football coach Guz Malzahn got a big ovation when he was shown on the video screens inside U.S. Bank Arena.

The first national semifinal is under way with Auburn, fresh off a trio of wins over Kansas, North Carolina and Kentucky, taking on No. 1 seed Virginia at U.S. Bank Stadium in Minneapolis.

It’s the quintessential matchup of high-speed, 3-point-shooters in the Tigers against a methodical, defensive bunch of Cavaliers. It’s also a matchup of the mighty SEC and hoops-mad ACC.

Auburn made a late change to its starting lineup, putting Danjel Purifoy in its first five.

The second semifinal pits Texas Tech, the regular-season co-champs of the Big 12, against Michigan State. The Red Raiders are in the Final Four for the first time while the Spartans are making their 10th appearance in the national semifinals.

Auburn junior Jared Harper was the last player to leave the court after the Tigers and Virginia warmed up for their national semifinal. The 5-foot-11 guard made four straight deep, straight-on 3-pointers, and then a layup before jogging off the elevated court at U.S. Bank Stadium.

Once again, Auburn’s Malik Dunbar was wearing Chuma Okeke’s No. 5 jersey during warmups. Okeke is out with a knee injury sustained in the Sweet 16 victory against North Carolina

Auburn is in its first Final Four and Virginia its first since 1984. With both teams in blue and orange, it’s hard to tell which has more fan support for the first game of the Final Four doubleheader — though by volume of cheers, the Cavaliers appear to have an edge.

The betting public is split on Virginia and Auburn in the first game of the Final Four.

Betting data released by William Hill US on Saturday night shows more wagers are being placed on Auburn on spread and money line bets, but more money for both wagers is backing Virginia.

That difference shows a split between sharp bettors gambling more money per bet and a higher number of casual bettors who wager less.

The difference is especially stark on the money line, which is minus-300 for Virginia, meaning a gambler would need to bet $300 to win $100. William Hill says 77% of wagers are backing Auburn, where a $100 bet can win $250 if the Tigers win the game outright. Still, 72% of the money is favoring Virginia to win straight up.

The money line bet between Texas Tech and Michigan State is seeing a similar divide, with sharp bettors heavily backing the Spartans (92 and more tickets on Texas Tech (58%).

No surprises in the starting lineups for Virginia and Auburn in the first national semifinal.

The Tigers are going with their usual backcourt in Jared Harper and Bryce Brown, while their trio of forwards will be Horace Spencer, Malik Dunbar and Anfernee McLemore.

It’s been McLemore and sixth man Danjel Purifoy who have picked up the minutes in place of forward Chuma Okeke, who tore the ACL in his left knee late in a regional semifinal win over North Carolina.

Virginia is going with freshman Kihei Clark and juniors Kyle Guy and Ty Jerome in the backcourt, and De’Andre Hunter and Mamadi Diakite provide some length and ability to guard down low.

The Washington Post, citing unnamed sources, reported Saturday that Virginia Tech was on the verge of hiring UMBC’s Ryan Odom as its next coach. That would be the same UMBC that became the first 16-seed to beat a No. 1 when it knocked Virginia out of the tournament a year ago.

It could also be just a ruse, though. The Baltimore Sun received a text message from Odom saying of the rumor, “Nothing to it.” The newspaper also reported that two anonymous sources said the 44-year-old Odom —a longtime Virginia Tech assistant under Seth Greenberg — isn’t going anywhere.

Meanwhile in Minneapolis, the Hokies’ hated rivals were warming up for their Final Four matchup with Auburn.

The NCAA will honor late AP Basketball Writer Jim O’Connell at the Final Four in Minneapolis by leaving a courtside seat open for him this weekend. O’Connell covered 39 consecutive Final Fours from 1979-2017 for AP and was one of the most knowledgeable and well-known people covering college basketball. He died in July at 64 after fighting a series of ailments in recent years.

O’Connell, known as Oc to everyone who knew him, was a member of the U.S. Basketball Writers Association Hall of Fame and he received the Curt Gowdy Award from the Naismith Memorial Basketball Hall of Fame. Before Virginia plays Auburn in the first national semifinal Saturday, a video tribute to O’Connell will be shown in U.S. Bank Stadium.

Following an epic Elite Eight and a week of buildup, the Final Four is finally here.

Michigan State is the regular, making its eighth appearance in the national semifinals of the NCAA Tournament under Tom Izzo.

The Spartans will face Final Four newbie Texas Tech and its oxygen-sucking defense.

Virginia, the only No. 1 seed left in the bracket, is in Minneapolis to make a new kind of history after its momentous first-round fail against No. 16 seed UMBC a year ago.

The Cavaliers and their impenetrable pack-line defense will try to stop the volume-shooting Auburn Tigers, who have poured in 3-pointers during this NCAA Tournament like they’re playing pop-a-shot.