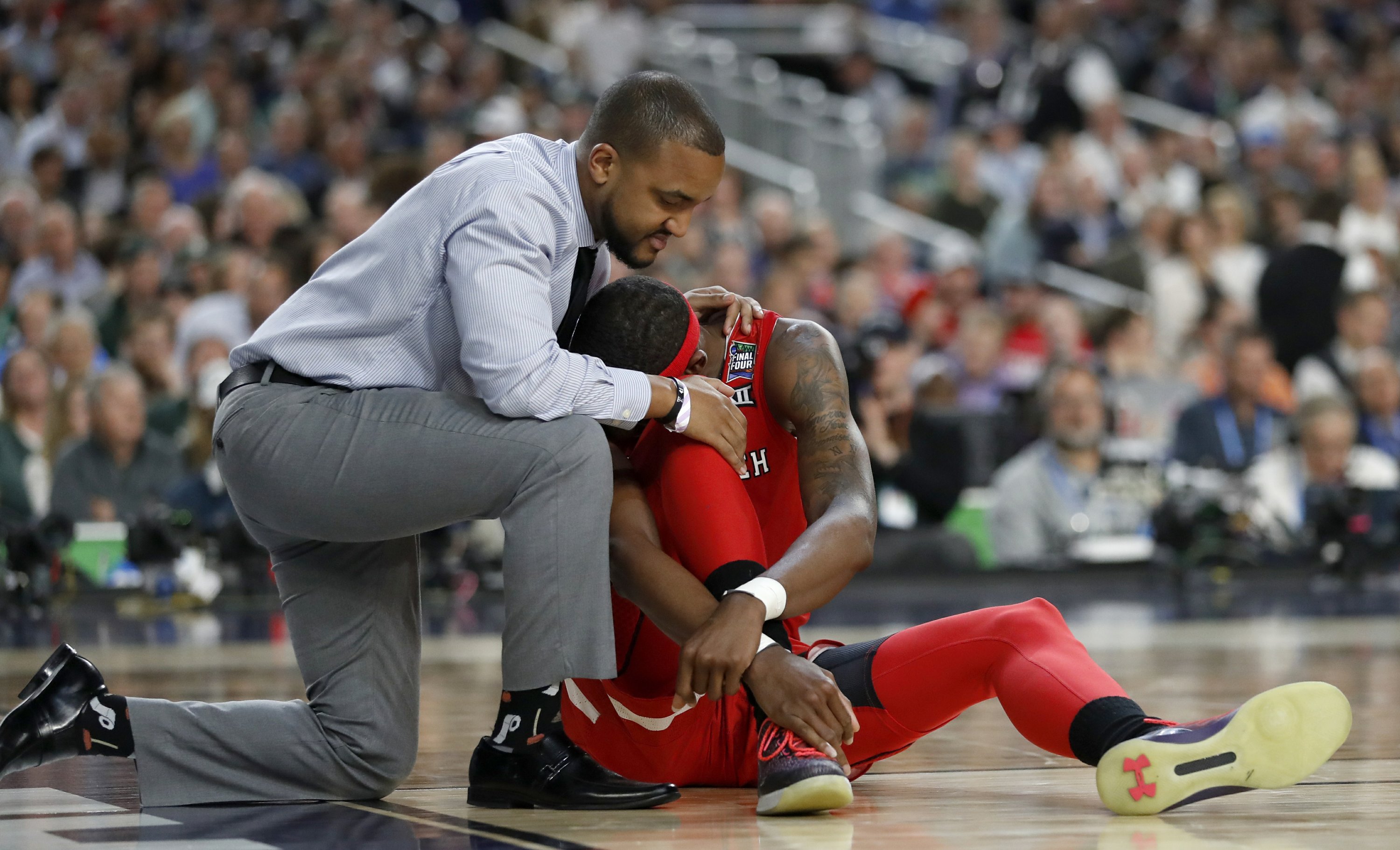 MINNEAPOLIS — The Latest on the NCAA Tournament championship game between Virginia and Texas Tech (all times local):

Texas Tech forward Tariq Owens had a protective boot on his injured right foot when the Red Raiders arrived at U.S. Bank Stadium for the NCAA championship game Monday night against Virginia.

The 6-foot-10 senior rolled an ankle in the second half against Michigan State in the Final Four. The team’s leading shot blocker was confident he would play in the title game after that win, talking to reporters at his locker about how a new tape job on his ankle allowed him to go back in against the Spartans.

But Owens was not made available to the media on Sunday and coach Chris Beard declined to update the St. John’s transfer’s status during his news conference. It was a curious move given that Owens finished the semifinal.

CBS reporter Tracy Wolfson tweeted about two hours before tip-off that she spoke with Beard, who says Owens probably would not play under normal circumstances but will be out there against the Cavaliers.

It’s difficult to overstate De’Andre Hunter’s importance to Virginia in the title game of the NCAA Tournament.

The 6-foot-7 redshirt sophomore is second on the team in scoring at 14.9 points to go with 5.0 rebounds per game. He’s efficient offensively, shooting 52% from the field, 42% from 3-point range and 78% from the foul line.

And of course, there’s the defensive side of the ball, where Hunter is versatile enough to chase guards or tussle with big men inside.

With Hunter in the lineup, Virginia has won 65 of 70 games over the past two seasons. That’s a 92.9% winning percentage.

Of the five losses, two came last year against West Virginia and Virginia Tech. Hunter was sidelined last year with an injury when the Cavaliers lost in stunning fashion to UMBC, the first 16-over-1 upset since the tournament expanded.

This year, Virginia lost twice to Duke in the regular season and to Florida State in the Atlantic Coast Conference Tournament semifinals.

A Texas Tech victory against Virginia in the NCAA Tournament championship game would mark an odd first: The Red Raiders would become the first team to win the title after losing their first conference tournament game.

The Red Raiders were the No. 1 seed in the Big 12 Tournament and were bounced by last-place West Virginia on March 13 in what was probably the most surprising result from the major conference tournaments.

Texas Tech could also on Monday night become the first team since Connecticut in 1999 to win a title the same year it makes its first Final Four. This breakthrough by the Red Raiders would be even more sudden.

UConn had reached the Elite Eight three times in the previous nine tournaments, and had three other Sweet 16 appearances before winning it all in 1999 by beating Duke. The Red Raiders had never been to an Elite Eight before last season and had only three Sweet 16 appearances in the previous 40 years. From 2008-15, Tech didn’t even make the NCAA Tournament.

Virginia’s road to this national championship game hit quite the pothole last year with the historic loss to No. 16 seed UMBC in the first round. The Cavaliers endured yet more turbulence over the summer, in the form of a team-building whitewater rafting trip on the New River organized by coach Tony Bennett.

“Some of our guys were scared to death,” Bennett said, singling out guard De’Andre Hunter.

Center Mamadi Diakite fell in that category, too, when Bennett sneaked under water and grabbed his leg, uncertain what lurked beneath the surface.

After the previous season ended so startlingly, the Cavaliers brought into the fall a strong bond from such a painful experience. The rafting trip further strengthened those ties.

“The coaches looked sort of like players. We could interact and have fun. That hierarchy wasn’t here,” Diakite said. “We were just playing around.”

When Bennett addressed the team before the Purdue game in the South regional final, pondering the journey that took them to the verge of the Final Four, he teared up as he spoke. Bennett thought back to that summer day when he wondered what the coming year would bring.

“It was the most beautiful setting just floating down the river with these guys,” Bennett said.

A look at advanced statistics for the NCAA Tournament shows that Virginia’s offense has been more efficient than Texas Tech, but the Red Raiders are locking down on opponents at a tougher rate.

Yet while Virginia’s offense has been more efficient in the tournament, the Red Raiders’ defense has been tougher statistically. Texas Tech has held all five of its tournament opponents to less than a point per possession.

Texas Tech and Virginia are each going for their first national titles backed by hard-nosed defenses that were among the best in the nation.

Virginia (34-3) the standard-bearer in lockdown basketball. The Cavaliers are going against the new kids on the defensive block, the Texas Tech Red Raiders (31-6).

The result will give the NCAA Tournament its first first-time champion since coach Billy Donovan won it all with Florida in 2006.

Texas Tech reached the Elite Eight for the first time last season and Virginia lost its previous two trips to the Final Four, in 1981 and 1984.

The last time two teams who had never won a championship played in the title game was Michigan State against Indiana State in 1979. That’s right, Magic Johnson vs. Larry Bird.