In a first, Bedouin women lead tours in Egypt’s Sinai 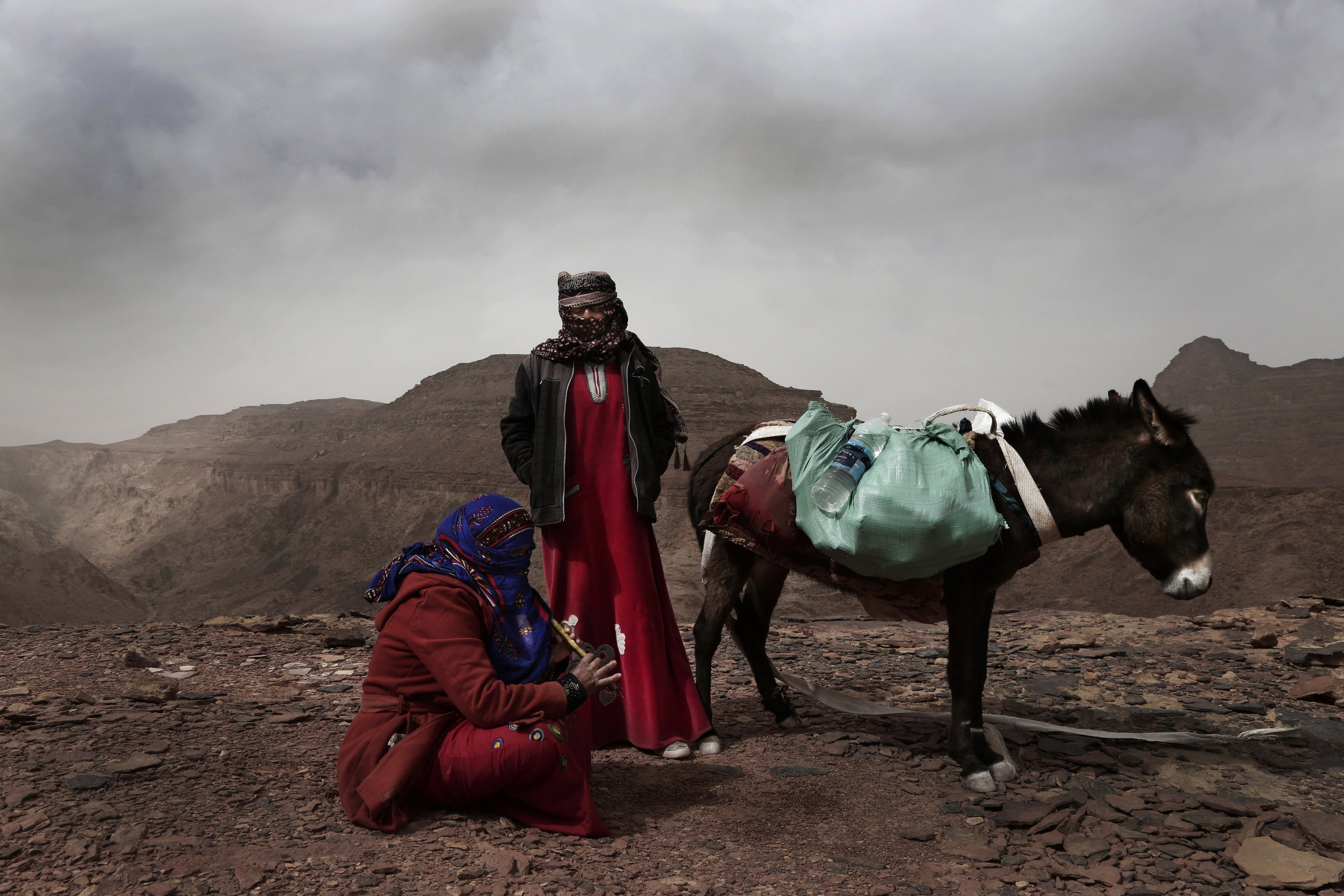 ABU ZENIMA, Egypt — Amid a stunning vista of desert mountains, a Bedouin woman, Umm Yasser, paused to point out a local plant, and she began to explain how it was used in medicine to the group of foreign tourists she was guiding.

Umm Yasser is breaking new ground among the deeply conservative Bedouin of Egypt’s Sinai Peninsula. Women among the Bedouin almost never work outside the home, and even more rarely do they interact with outsiders. But Umm Yasser is one of four women from the community who for the first time are working as tour guides.

“It is against our culture, but women need jobs,” the 47-year-old Umm Yasser said. “People will make fun of us, but I don’t care. I’m a strong woman.”

They are part of Sinai Trail, a unique project in which local Bedouin tribes came together aiming to develop their own tourism. Founded in 2015, the project has set up a 550-kilometer (330-mile) trail through the remote mountains of the peninsula, a42-day trek through the lands of eight different tribes, each of which contributes guides. The project has been successful in bringing some income to the tribes, who often complain of being left out of the major tourism development of the southern Sinai, home to beach resorts and desert safaris.

Until now, all the project’s guides were men. Ben Hoffler, the British co-founder of the Sinai Trail, felt it was not enough. “How can we be credible calling this the ‘Sinai Trail’ if the women aren’t involved?”

But even after years of trying by Hoffler, almost all the tribes still reject women guides. Only one of the smallest, oldest and poorest tribes, the Hamada, accepted the idea.

There are some conditions. The tourists can only be women, and the tours can’t go overnight. Each day before the sun sets, the group returns to the Hamada’s home village in Wadi Sahu, a narrow desert valley. The organizers also urge the tourists to photograph the guides only when they are wearing a full veil over the face that covers even the eyes with mesh.

Umm Yasser was the first to join. She said she started hiking when she was a child and knows the mountains and the valley by heart. She convinced the families of three other women to allow them to work as guides.

Their tribe is a poor one, living in small concrete houses strung along the Wadi Sahu. Electricity runs no more than five hours a night and there is no running water. It is isolated deep in the mountains of south Sinai, far from the tourism centers in Sinai along the Red Sea coast or near the famed Saint Catherine’s Monastery. The men often leave the village to find work, either at resorts or in mines further south.

The Sinai Trail came together in some of the hardest years for tourism. It was launched as an Islamic State group-linked insurgency intensified in the northern part of Sinai and a year after a Russian passenger plane crashed, killing all 224 passengers on board in a likely militant bombing. The violence has stayed far from southern Sinai, where tourist resorts are located — but the industry has had to push hard to win tourists back.

On a recent tour joined by the Associated Press, 16 female tourists — from Korea, New Zealand, Europe, Lebanon and Egypt — were led by Umm Yasser and the other three women guides, Umm Soliman, Aicha, and Selima, through the rugged, landscape in and around Wadi Sahu.

“I think south Sinai is safe especially when you are in the care of Bedouins. … This is where I feel at home. Every corner there is scenery and another beautiful view,” said Marion Salwegter, a 68-year-old Dutch woman who travels to southern Sinai every year alone to escape the winters in Holland.

During the two-day tour, the group hiked across an endlessly broad landscape of mountain peaks and valleys of dry riverbeds. While male Bedouin guides range far from home, the women tend to move closer, with an exceptionally rich knowledge of the surrounding mountains. The guides talked about the local plants and herbs, the history and legends of the area and pointed out the borders of the area’s tribes.

In the evening, the group returned to the Hamada tribe’s village. The women sat on the floor of Umm Yasser’s home and the tourists asked the guide about life in the village, marriage and divorce.

Umm Yasser is skeptical other Bedouin women will join her as a guide or in working in general any time soon. But, she said, “There is no shame in working. This is what I believe in, and it makes me strong.”

Some attitudes are changing. Mohammed Salman, an elderly man from the Aligat tribe, said he thought the guides project was a great step for women. “If a woman wants to work, she should be able to have the right to,” he said. “Many men say no, a woman’s place is at home. But I’m sick of this ideology. She’s a human being.”

Younger Bedouin girls tagged along with the group and talked about wanting to be female guides in the future.

“This trip is going down in history and will be talked about,” said Julie Paterson, a facilitator for Sinai Trail who often works with Bedouin women. “It might also go into Bedouin oral history.”