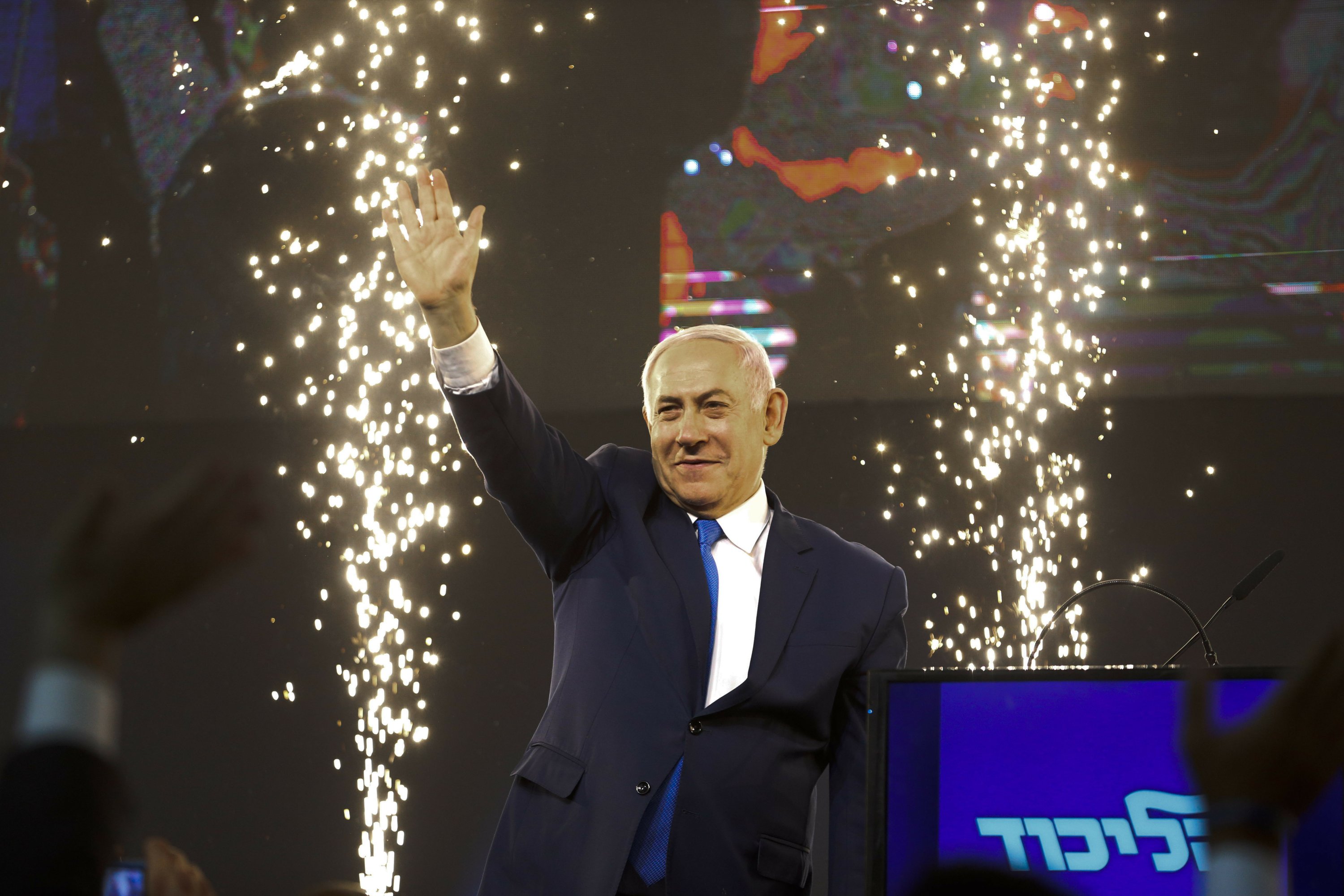 JERUSALEM — The Latest on the outcome of Israeli elections (all times local):

Israel’s Blue and White party leaders are conceding defeat in Israel’s election, saying they will work against Israeli Prime Minister Benjamin Netanyahu from the opposition.

Yair Lapid, the party’s No. 2 figure, told a press conference Wednesday that though his party “did not win in this round, I respect the voters.” He said his party will “embitter” Netanyahu’s life from the opposition.

The Blue and White party, headed by former army chief of staff Benny Gantz, drew even with Netanyahu’s Likud party, but the incumbent prime minister is poised to form a government with his larger bloc of religious and nationalist allies.

Gantz says his party has “founded a true alternative rule to Netanyahu.”

Israeli Prime Minister Benjamin Netanyahu says President Donald Trump has called to congratulate him on his election win from Air Force One.

Netanyahu’s office issued a statement Wednesday saying Trump “warmly congratulated” Netanyahu, who thanked the president for his “great support for Israel,” including the White House’s recognition of Jerusalem as Israel’s capital and Israeli sovereignty over the Golan Heights.

Nearly all votes have been tallied after Israel’s parliamentary elections on Tuesday. Netanyahu holds a slim lead over rival Benny Gantz and is likely to be able to form the next government.

Netanyahu campaigned on his foreign policy victories and close relations with world leaders — Trump in particular.

President Donald Trump is congratulating Benjamin Netanyahu as he appears to be headed for a fifth term as prime minister of Israel.

Speaking with reporters in Washington on Wednesday, Trump acknowledged that it might be a bit premature to declare Netanyahu’s victory, but said he’s hearing that he’s won.

Unofficial election results seem to give a solid majority in parliament to Netanyahu’s right-wing Likud and other nationalist and religious parties. The outcome would affirm Israel’s continued shift to the right and further dim hopes of resolving the Israeli-Palestinian conflict. The Palestinians have severed ties with the Trump administration.

Trump’s son-in-law and senior adviser Jared Kushner has been working on a Mideast peace plan. Few if any details have emerged, but Trump says there will be “some pretty good action” on the plan soon.

Israel’s president says his talks with political parties are to begin next week, in the run-up to picking the leader he thinks has the best chance of forming a stable governing coalition.

Reuven Rivlin added Wednesday that, for the first time, his meetings with party leaders would be broadcast on live television “in the name of transparency.”

Although the president acts largely in a ceremonial capacity, he is charged with choosing a candidate for prime minister after hearing recommendations from the heads of all factions. He will then task the leading candidate with forming a government within 42 days.

Prime Minister Benjamin Netanyahu appears poised to be the president’s choice, with close-to-complete unofficial election results giving his right-wing Likud and other nationalist and religious parties a solid majority in parliament.

Germany says it will work closely with any new Israeli government and stressed the two countries’ “cordial” ties despite recent differences on Israel’s settlement policies.

The Likud party of right-wing Israeli Prime Minister Benjamin Netanyahu appears set to win the election, setting up his Likud party to forge a governing coalition.

Seibert told reporters that “Israel lies in a region with enormous challenges, which is why it’s important to form a government quickly.”

He declined to comment on Netanyahu’s possible re-election to a fifth term but said the German government “will work closely, cordially and faithfully with the new Israeli government.”

Benny Gantz, Prime Minister Benjamin Netanyahu’s chief rival, says “nothing is over, we are making our moves,” despite election results that appear to hand Netanyahu a clear mandate for a fifth term.

Gantz told reporters Wednesday that the broad support for his centrist Blue and White party proves “the people want a different way and we are going to deliver it.”

But the former army chief’s subdued tone differed starkly from his victory speech late Tuesday, when exit polls showed the rivals in a dead heat.

With Netanyahu’s Likud poised to forge a coalition with its ultra-Orthodox and nationalist allies, Gantz advised the public to “see what the day brings,” without elaborating.

Gantz also hailed his party’s competitive performance as a “historic achievement,” saying “never before has such a big and significant party been formed … in such a short time.”

A senior Hamas leader is dismissing the outcome of Israel’s election as irrelevant, saying “all parties are faces of one coin, the coin of occupation.”

Khalil al-Hayya said Wednesday that “there is no difference” between the Israeli parties, and pledged that Gaza’s militant Hamas rulers would continue seeking to “end the occupation and achieve our national goals.”

He spoke as right-wing Israeli Prime Minister Benjamin Netanyahu appeared poised to win a historic fifth term and cobble together a governing coalition of ultra-Orthodox and nationalist allies.

The Palestinian issue and prospects for peace negotiations were notably absent from political debate this election. In a last-ditch effort to rile his base, Netanyahu made a weekend vow to annex the Israeli-occupied West Bank, which would extinguish hope for a Palestinian state.

Turkish Foreign Minister Mevlut Cavusoglu is urging Israel to abandon strong “rhetoric and populism” now that the elections are over.

Cavusoglu’s comments were in an apparent reference to Israeli Prime Minister Benjamin Netanyahu’s recent pledge to annex Jewish settlements in the West Bank if he wins the election.

The minister told Turkey’s NTV news channel on Wednesday that Israel “must put aside the populism and the rhetoric, it must abandon its aggressive stance.”

Cavusoglu also called on the United States to be an “honest broker” in the Mideast dispute, saying a U.S. peace plan for the region must be fair and objective toward Palestinians.

An aide to Palestinian President Mahmoud Abbas says the outcome of Israel’s election raises Palestinian fears about an Israeli annexation of parts of the occupied West Bank.

Close-to-complete unofficial results indicated on Wednesday that Prime Minister Benjamin Netanyahu is headed to a fifth term, with the expected support of nationalist and ultra-Orthodox Jewish parties.

In the final stretch of the campaign, Netanyahu pledged he would annex Israeli settlements in the occupied West Bank, a move that would destroy remaining hopes for Palestinian statehood.

Abbas aide Ahmed Majdalani says that Palestinians will seek the help of the international community to try to block any annexation plans. He said that the outcome of the election means a boost for what he called the “extreme right-wing camp” in Israeli politics.

Benjamin Netanyahu appears headed toward a historic fifth term as Israel’s prime minister, with close-to-complete unofficial election results giving his right-wing Likud and other nationalist and religious parties a solid majority in parliament.

The outcome affirmed Israel’s continued tilt to the right and further dimmed hopes of a negotiated solution to the Israeli-Palestinian conflict.

Re-election will give Netanyahu an important boost as he braces for the likelihood of criminal charges in a series of corruption scandals.

With 97.4% of the vote counted Wednesday, Likud and its natural political allies commanded a 65-55 majority in parliament. However, the country now faces what could be weeks of political negotiations over the composition of a ruling coalition.