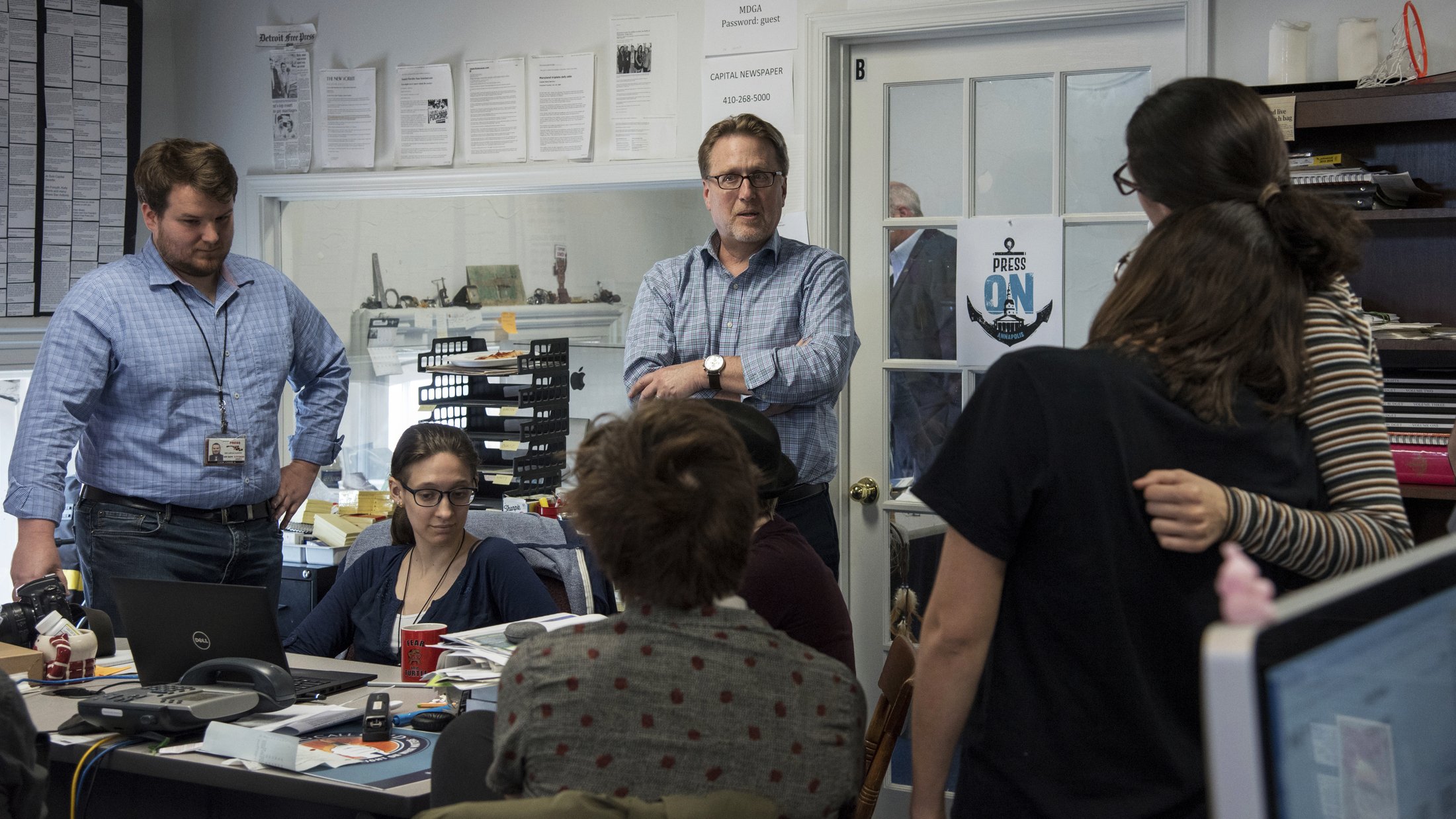 ANNAPOLIS, Md. — Capital Gazette staff members stayed silent and somberly exchanged hugs Monday when the Maryland newspaper won a special Pulitzer Prize citation for its coverage and courage in the face of a massacre in its newsroom.

Before the announcement, newspaper employees gathered in their newsroom to remember the five staffers who were shot and killed last June in one of the deadliest attacks on journalists in U.S. history.

“It’s definitely bittersweet,” said reporter Chase Cook. “Since it’s so connected to something so tragic, there was no euphoric pop-off of excitement.”

The Capital Gazette, based in the Maryland state capital of Annapolis, published on schedule the day after the shooting attack. The man charged in the attack had a longstanding grudge against the newspaper.

Capital Gazette editor Rick Hutzell said the paper had submitted entries in five categories, including a joint entry with The Baltimore Sun for breaking news. Although the Capital Gazette didn’t win in any of the five categories, the Pulitzer board awarded the citation with an extraordinary $100,000 grant to further its journalism.

The Pulitzer board said the citation honors the journalists, staff and editorial board of the newspaper “for their courageous response to the largest killing of journalists in U.S. history in their newsroom” and for an “unflagging commitment to covering the news and serving their community at a time of unspeakable grief.”

Hutzell said he thought the Pulitzer board handled its decision admirably.

“Clearly, there were a lot of mixed feelings,” Hutzell said. “No one wants to win an award for something that kills five of your friends.”

He also said the paper was aware it would be facing stiff competition.

“It’s very difficult when you are reporting in some ways on yourself,” he said. “That’s not what we do. We’re behind the camera, not in front of it.”

Employees John McNamara, Wendi Winters, Rebecca Smith, Gerald Fischman and Rob Hiaasen were killed in the attack last June 28. The shooting didn’t stop other staffers from covering it and putting out a newspaper the next day, with assistance from colleagues at The Baltimore Sun, which is owned by the same company.

Joshua McKerrow, a photographer for the newspaper, said the staff remained “stone silent” for about a minute after learning about the citation. Capital Gazette reporter Rachael Pacella said the citation provided a “big sense of validation for the staff.”

“It’s been a challenge returning to work,” she said. “It lets you know that the additional stress you’ve endured going back to work has been worth it and appreciated.”

Features reporter Selene San Felice said she had to compose herself in a bathroom before the prizes were announced. She initially wasn’t sure how to react to the special citation.

“At first, I thought that meant they just feel bad for us. And that’s not true, because there are a lot of people you can feel bad for right now. We’ve really earned this,” she said.

Jarrod Ramos, the man charged in the newsroom shooting, had a history of harassing the newspaper’s journalists. He filed a lawsuit against the paper in 2012, alleging he was defamed in an article about his conviction in a criminal harassment case in 2011. The suit was dismissed as groundless.

The rampage last June began with a shotgun blast that shattered the glass entrance to the open newsroom. Journalists crawled under desks and sought other hiding places, describing agonizing minutes of terror as they heard the gunman’s footsteps and repeated blasts of the weapon. County police said they captured Ramos hiding under a desk. Authorities say he did not exchange fire with police.

Ramos’ trial is scheduled to start in November. He pleaded not guilty last year to first-degree murder charges. April 29 is the deadline for attorneys to change his plea to not criminally responsible by reason of insanity.

In October, the National Press Foundation announced that Hutzell won the Benjamin C. Bradlee Editor of the Year Award. The award was established in 1984 to recognize imagination, professional skill, ethics and an ability to motivate staff.

In December, the newspaper’s staff was included by Time magazine among its 2018 Person of the Year honorees.