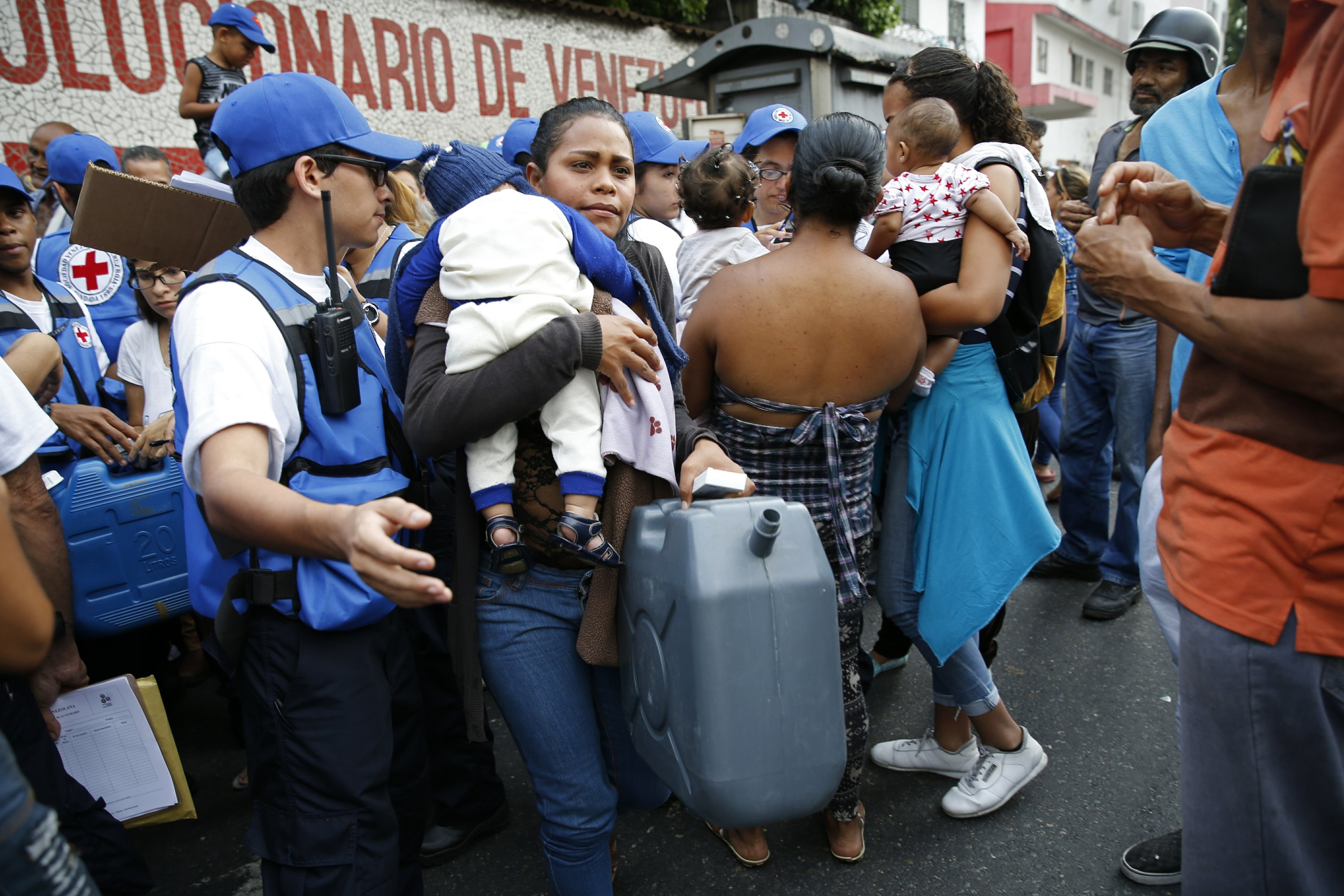 CARACAS, Venezuela — Red Cross volunteers distributed the first shipment of badly needed emergency supplies in Venezuela on Tuesday after months of feuding between the government, which has denied the existence of a humanitarian crisis, and opponents who have been seeking to use the delivery of aid to force President Nicolás Maduro from power.

In the working class neighborhood of Catia near downtown Caracas, government supporters fired a half dozen gunshots in the air as a van arrived to distribute water purification tablets and empty plastic jugs, creating a small commotion on a major avenue during rush hour.

“We’re very happy,” Sergio Guerra, a motorcycle taxi driver, said nonchalantly as the sound of the shots cracked overhead. “With these tablets we can defend ourselves a little better by drinking cleaner water.”

A small contingent of police showed up to restore order, and volunteers in blue vests agreed to close the van doors from which they were running the slow-moving distribution operation. Elsewhere, trucks carrying the aid snaked through a Caracas highway, the drivers of several vehicles jubilantly honking in support.

The delivery of international humanitarian aid has become a focal point in Venezuela’s power struggle, now in its third month, after opposition leader Juan Guaidó declared himself interim president. Both the opposition and the government have been accused of politicizing the aid issue as hospitals struggle to provide even basic care.

Guaidó has rallied the international community and amassed several hundred tons of aid, primarily from the United States, at Venezuela’s borders with Colombia, Brazil and the Dutch Caribbean. But Maduro has steadfastly refused to allow it in, blocking opposition activists who in February organized a caravan to deliver the shipments.

“We aren’t beggars,” Maduro said at the time.

On Tuesday evening, Maduro sought to claim credit for the arrival of the first batch of Red Cross aid, saying on national television that his government coordinated it in line with “international protocols.”

As large crowds have taken to the streets to protest his rule this year, Maduro has been pressed to address the nation’s shortages of essential goods like food and medicine. He’s selectively chosen to accept aid from allies like China, framing it as a necessary measure to confront U.S. economic sanctions.

The delivery of any aid is tacit recognition that his country is in a humanitarian crisis, a notion he has long dismissed as opposition propaganda to pave the way for a foreign military intervention.

In recent years, an estimated 3.7 million people have fled the South American nation for neighboring countries like Colombia, some seeking health care for everything from minor infections to cancer treatment they can no longer obtain. Hospitals in Venezuela often operate without essential supplies, asking patients to bring in surgical gear and medicine.

A recent report by Human Rights Watch and the Johns Hopkins Bloomberg School of Public Health concluded Venezuela’s health system is in “utter collapse.” It cited increased levels of maternal and infant mortality, the spread of vaccine-preventable diseases and high levels of child malnutrition.

In late March, the International Federation of Red Cross and Red Crescent Societies announced it would soon begin delivering assistance to an estimated 650,000 people and vowed that it would not accept interference from either side of the polarized country. Federation President Francesco Rocca said Red Cross workers would focus on the medical needs of hospitals, regardless of whether they are state-run or not — a pledge repeated Tuesday.

“It will be distributed in conformance with the fundamental principles of our movement, especially neutrality, impartiality and independence,” said Mario Villarroel, president of the Venezuelan Red Cross.

Nonetheless, both sides made not-so-subtle inferences seeking to claim the upper hand in the aid’s arrival.

Health Minister Carlos Alvarado, speaking from the airport where the aid landed, said a total of 24 tons was delivered Tuesday, including 14 generators which have become vital as the nation suffers from consistent blackouts.

Guaidó, meanwhile, lashed out at Maduro’s government for letting Venezuela’s health crisis spiral out of control.

“Aid is entering because they destroyed the health system,” he said. “It entered because we demanded it.”

Villarroel said the aid will be distributed to various hospitals around the country and thanked both state and private institutions for their help.

“Our mandate is to help save lives,” he said.