The Latest: Part of Notre Dame support to be dismantled 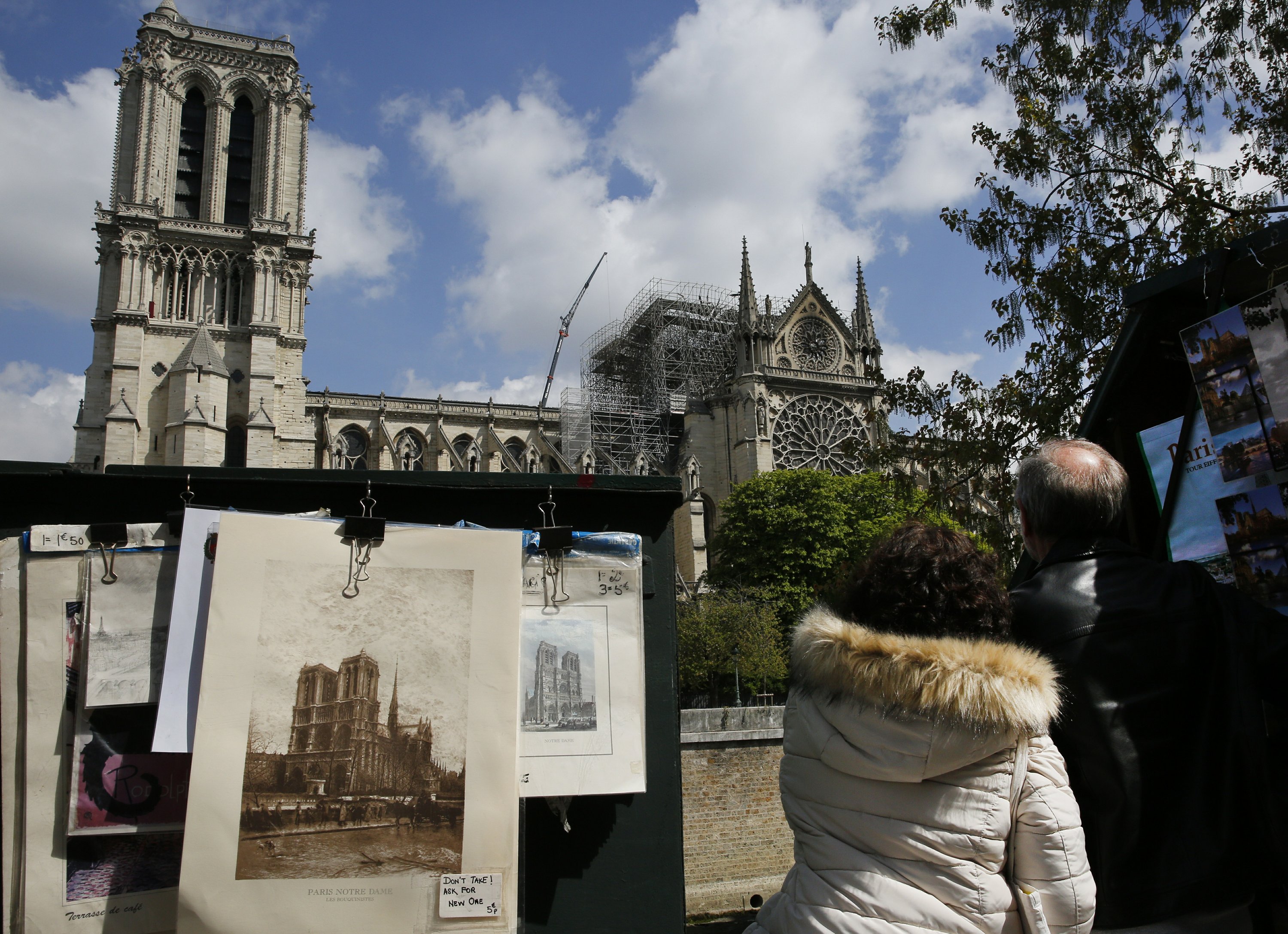 PARIS — The Latest on the fire that tore through the Notre Dame Cathedral in Paris (all times local):

A Paris official says part of the support structure around Notre Dame Cathedral’s rose windows is to be dismantled to prevent further damage following a massive fire.

The Culture Ministry’s fire expert, Jose Vaz de Matos, told reporters that part of the triangular structure above the central rose window is to be taken down “to limit the movement” of the stone.

De Matos said the main risk to the cathedral is the gables above the rose windows, which provide crucial support to the stained glass masterpieces.

He said the structure is particularly exposed to the wind, and the overall structure remains fragile.

Police officials told The Associated Press that the triangular structure is leaning 20 centimeters forward toward the street since the fire.

A Paris fire official says the towers of Notre Dame would have fallen if firefighters hadn’t deployed massive equipment and acted swiftly.

Philippe Demay denied there was any delay and said firefighters acted as fast as they could.

Demay told reporters that the operation was extremely difficult and that the towers could have collapsed “if we hadn’t put heavy equipment in place.”

Paris firefighters say Notre Dame Cathedral’s rose windows are in good shape after a devastating fire, but that their support structures are at risk.

Fire fighter spokesman Gabriel Plus told reporters that the rose windows are “in good condition” but that “there is a risk for the gables that are no longer supported by the frame.”

He said firefighters took down statues inside the gables above the rose windows to protect them, and took care not to spray water too hard on the delicate stained glass.

He said firefighters and experts are still closely monitoring the building to determine how much damage the structure suffered and what needs to be dismantled to avoid collapse.

Hungary’s deputy prime minister says the Notre Dame Cathedral fire is a “tragic symbol” of the “apocalyptic loss of values we are witnessing in the western world.”

In an excerpt of an interview to be broadcast on news channel Hir TV this coming Easter Monday, Zsolt Semjen, said “the French secularist, anti-church policy is also deeply responsible” for the fire. The French Republic owns churches that were constructed before 1905.

Semjen, who is head of the Christian Democratic Party, said Hungary would consider contributing to Notre Dame’s reconstruction, but added that “the reality is that France is a rich country, so shouldn’t Macron have announced that France will rebuild Notre Dame?”

Semjen said: “May God allow this tragedy to be a sign which shakes up the French nation, not just regarding the reconstruction of the church but also in terms of their own national self-esteem, their own history, their own Frenchness and their own Christianity.”

Paris merchants whose livelihoods depend on Notre Dame tourism are worried about the cathedral’s stability and their own futures.

The island that houses the cathedral has been closed to the public since Monday’s fire, and its residents evacuated. It’s literally the nucleus of Paris — all distances in France are measured from the esplanade in front of Notre Dame.

It’s also one of the most-visited spots in France, whose economy depends heavily on tourism.

Patrick Lejeune, president of the Notre Dame neighborhood merchants association, told The Associated Press that the group’s 150 employees fear for the future.

“No one is talking about us,” he said. Bustling streets are now “totally closed. I don’t have access to my office.”

He also expressed concern for the stability of the cathedral and its central rose window. Its spire collapsed and roof was destroyed in the fire.

French Prime Minister Edouard Philippe says the government will take a series of measures to secure the financing and accelerate the renovation work of Notre Dame Cathedral.

Speaking after a special Cabinet meeting dedicated to Notre Dame, Philippe said the government will present a bill next week to ensure “transparency and good management” during the reconstruction.

He said one measure will aim at ensuring that all donations actually end up going to Notre Dame.

The bill will also allow French ordinary citizens to get special tax cuts if they make a donation.

Another measure will enable the French state to adapt legal procedures in order to ease the reconstruction.

The organist who was playing at evening mass inside Notre Dame when flames began heading towards the iconic cathedral’s roof says people didn’t immediately react when the fire alarm rang as a priest was reading from the Bible.

Johann Vexo says “nobody knew exactly what it was because it was the first time that we heard it inside the cathedral.”

People then started to leave the building but some, including Vexo, later came back. The organist says he spent another 20 minutes inside the cathedral, chatting to colleagues, before finally leaving at about 6.45 p.m. local time on Monday night.

Vexo says he didn’t see fire or smoke and “really thought that it was just something not working good or just a mistake, or whatever.”

Notre Dame’s spectacular and unique great organ seemingly escaped largely intact from the blaze that destroyed the roof and spire.

Vincent Dubois, another Notre Dame organist who wasn’t in the cathedral, says the organ “must be completely dusted off, cleaned from the soot, the dust that is inside.”

Notre Dame’s rector says he will close the burned-out Paris cathedral for up to six years.

Bishop Patrick Chauvet acknowledged that the famed monument would close down for “five to six years” as he spoke with local business owners Wednesday, two days after a blaze torched the roof of the cathedral and brought down its spire.

Chauvet said “a segment of the cathedral has been very weakened” by the devastating fire. He did not elaborate which section he was talking about.

He added it was unclear what the church’s 67 employees would be doing in the future.

Edouard Philippe is speaking following a special Cabinet meeting Wednesday held by French President Emmanuel Macron, focusing on the reconstruction of the cathedral.

Philippe said the competition will also assess whether the spire should be “adapted to technologies and challenges of our times.”

He said authorities have no estimate yet of the total cost of the renovation work. Macron said Tuesday he wants the cathedral to be rebuilt in five years.

Philippe said: “This is obviously a huge challenge, a historic responsibility.”

The Paris prosecutor’s office says investigators looking into the causes of the Notre Dame fire have still not been able to look inside the cathedral, as it remains unsafe.

Investigators will continue with interviews Wednesday, saying the inquiry will go on until prosecutors uncover “the truth and identify the origin” of the blaze. On Tuesday, investigators spoke with around 30 witnesses, including employees of companies involved in the church’s restoration and security personnel.

The Czech Philharmonic and other major Czech orchestras will join forces to play a fundraising concert to help restore Notre Dame Cathedral, heavily damaged by a devastating fire.

The Czech Philharmonic says the orchestras will perform Antonin Dvorak’s “Stabat Mater” in St. Vitus Cathedral, a Gothic masterpiece, in Prague on Tuesday.

The orchestras want to support France in renovating one of the most important religious buildings in Europe.

“Stabat Mater” is a key religious piece by Dvorak. The oratorio was said to be inspired by the death of his three children.

St Vitus is the biggest and most important Czech cathedral and the “Concert for Notre Dame” will be broadcast live by Czech public radio and television.

Pope Francis has told his weekly audience at St. Peter’s Square of his sadness over the fire at Notre Dame Cathedral, the seat of the Paris archdiocese.

The pope said Wednesday that “I take this opportunity to express to the Paris diocesan community, all Parisians and the entire French population my great affection and my closeness after the fire in Notre Dame Cathedral.”

Addressing those gathered, pope said, “I was very sad and I feel very close to all of you.”

He expressed “the gratitude of the whole church to those who did their utmost to save the Basilica, also risking their lives.”

The pope on Tuesday sent a telegram of condolences to Paris Archbishop Michel Aupetitand and phoned French President Emmanuel Macron to express his solidarity.

Nearly $1 billion has already poured in from ordinary worshippers and high-powered magnates around the world to restore Notre Dame Cathedral in Paris after a massive fire.

Construction teams brought in a huge crane and a delivery of planks of wood to the site Wednesday morning.

French President Emmanuel Macron ratcheted up the pressure by setting a five-year deadline to restore the 12th-century landmark. Macron is holding a special Cabinet meeting Wednesday dedicated to the Notre Dame disaster.

Presidential cultural heritage envoy Stephane Bern told broadcaster France-Info on Wednesday that 880 million euros ($995 million) has been raised so far. Contributors include Apple and magnates who own L’Oreal, Chanel and Dior, as well as Catholics and others from around France and the world.

Authorities consider the fire an accident.