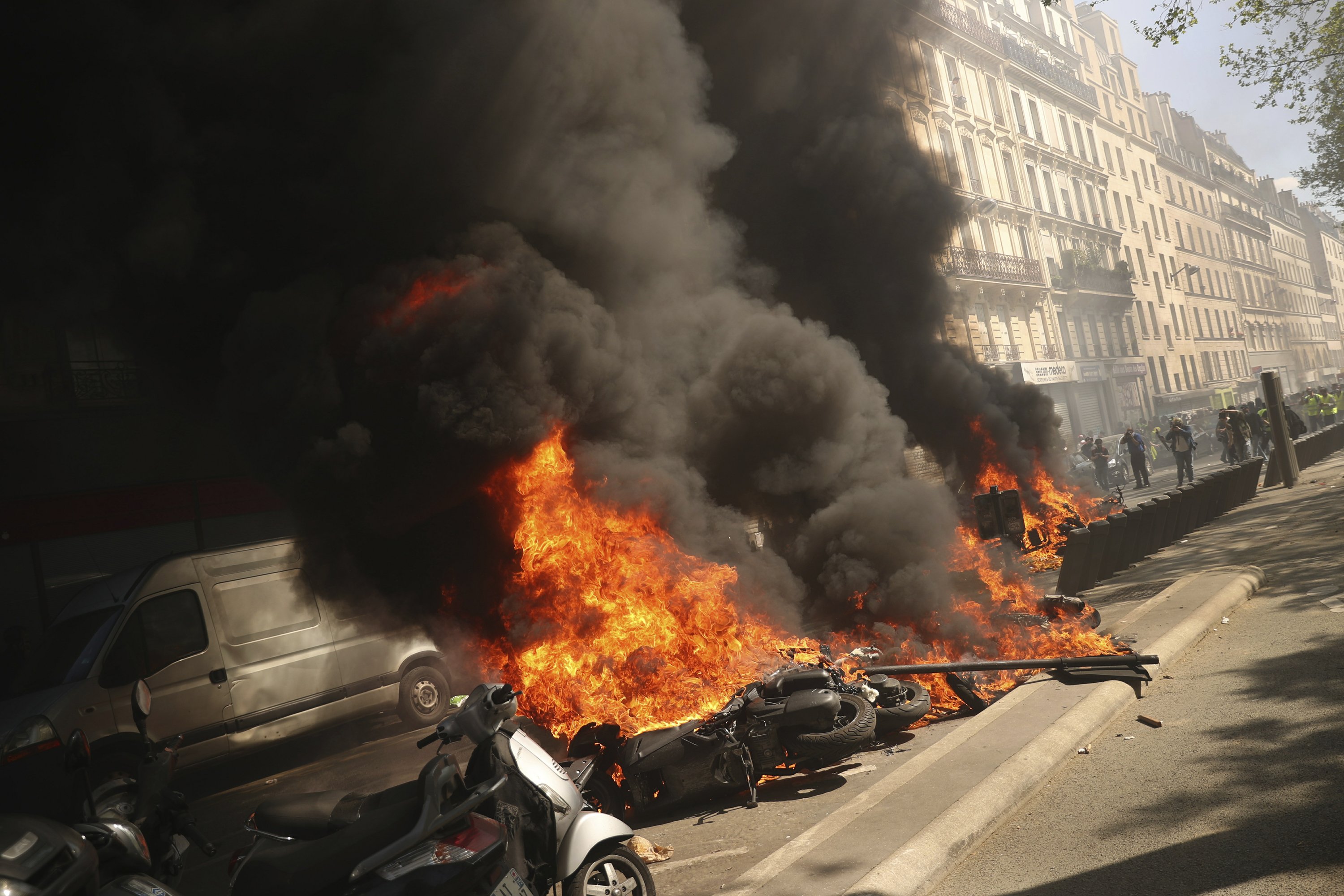 PARIS — The Latest on the yellow vest protests in France (all times local):

A car, motorbikes and multiple barricades are ablaze in eastern Paris as a yellow vest protest has degenerated into scattered violence.

While that neighborhood was tense, overall Saturday’s yellow vest actions have been peaceful. Many protesters are frustrated that the international effort to help fire-damaged Notre Dame Cathedral has eclipsed the five-month-old yellow vest movement against wealth inequality.

Protesters have set small fires and police have fired tear gas on the sidelines of yellow vest demonstrations in the French capital.

The Paris police headquarters said authorities detained 126 people by early afternoon and carried out spot checks of more than 11,000 people trying to enter the capital for Saturday’s protests.

Police fired tear gas amid tensions at a march of several thousand people from France’s Finance Ministry toward the Place de la Republique plaza in eastern Paris. Barricades were set ablaze at one spot, and branches set on fire elsewhere. Firefighters quickly responded to extinguish the flames.

The march was one of several actions around Paris and other French cities Saturday.

The protesters are angry at high taxes and economic injustice, and are largely peaceful. Some are also frustrated that the effort to save fire-damaged Notre Dame Cathedral is eclipsing the yellow vest movement’s demands.

French yellow vest protesters are marching anew to remind the government that rebuilding the fire-ravaged Notre Dame Cathedral isn’t the only problem the nation needs to solve.

Multiple protest events are planned around Paris and other cities Saturday for the 23rd weekend of the yellow vest movement against wealth inequality and President Emmanuel Macron’s leadership.

One group wants to march on the presidential palace despite bigger-than-usual police presence. Another is aimed at showing yellow vest mourning over the Notre Dame blaze while also keeping up pressure on Macron.

Many protesters were deeply saddened by the fire at a national monument. But many are angry at the $1 billion in Notre Dame donations that poured in from tycoons while their own demands remain largely unmet and they struggle to make ends meet.