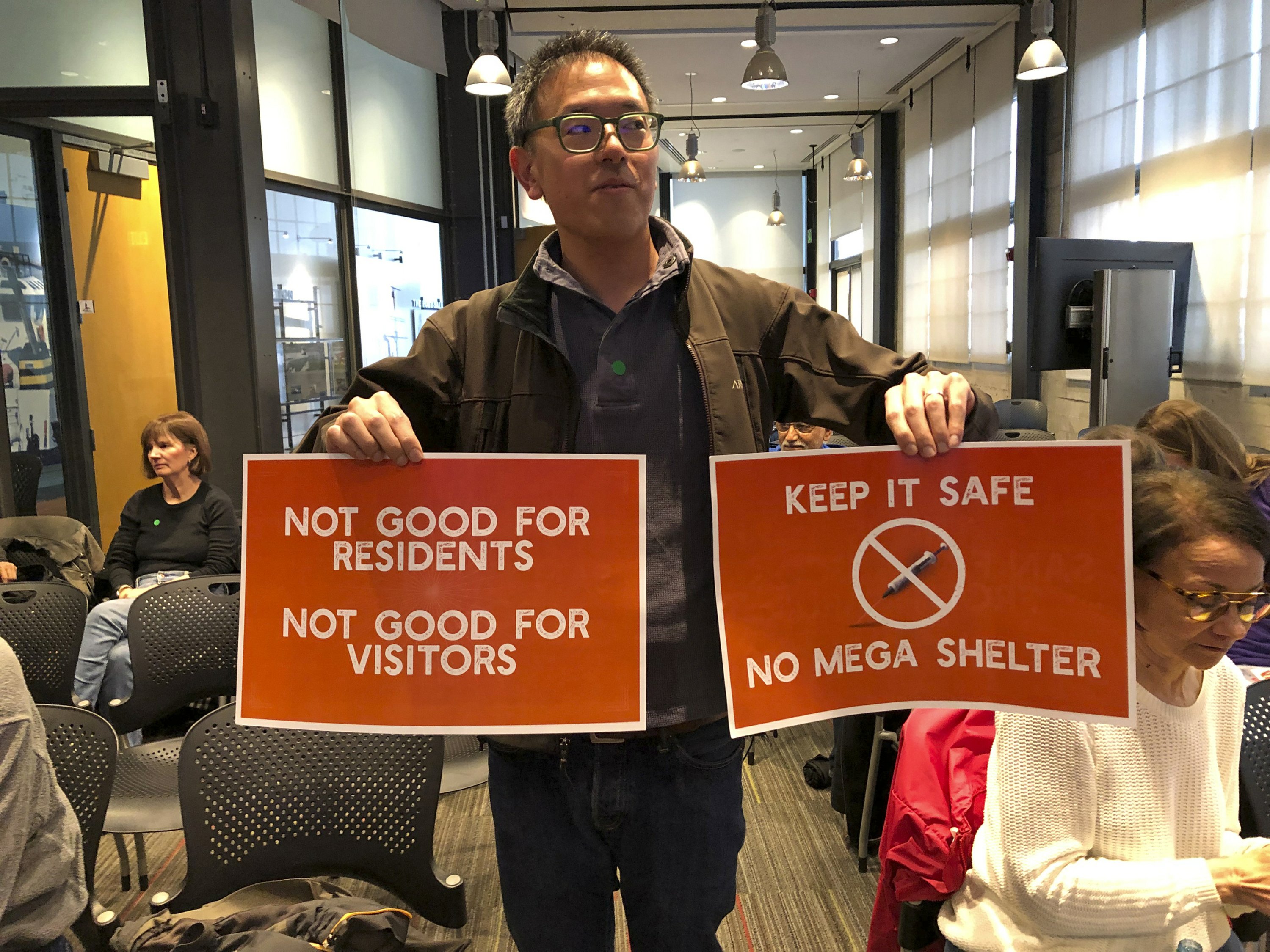 SAN FRANCISCO — San Francisco’s renowned waterfront hosts joggers, admiring tourists and towering condos with impressive views. It could also become the site of a new homeless shelter for up to 200 people.

Angry residents have packed public meetings, jeering at city officials and even shouting down Mayor London Breed over the proposal. They say they were blindsided and argue billionaire Twitter executive Jack Dorsey and other tech executives who support the idea should lobby city officials to build a shelter by their homes.

The waterfront uproar is among recent examples of strife in an expensive city that is both overwhelmed by tech wealth and passionate about social justice. San Francisco companies Pinterest and Lyft recently went public, and Uber and Slack are coming soon, driving fears that newly minted millionaires will snap up the few family homes left for under $2 million.

City Supervisor Sandra Lee Fewer fought tears at a testy hearing over a housing density development bill, inviting her critics to visit poor seniors in her district who eat cat food for dinner. Opponents of the bill stood and turned their backs on Supervisor Vallie Brown, who vigorously defended the legislation.

And as the city continues to grapple with a housing shortage, the entire Board of Supervisors was roasted on social media this month for rejecting a 63-unit housing project because it would cast shadows over a nearby park in an area with little green space.

“We’re definitely at the boiling point, whether it’s the housing crisis, whether it’s quality of life, which is exacerbated by the worst traffic congestion in America, or the affordability crisis,” said Supervisor Aaron Peskin.

A March New York Times story about the upcoming IPOs set off frenzied activity among potential homebuyers and a call from City Hall for a hearing on how all that new wealth will affect gentrification and city revenue.

Realtor John Townsend had the article on hand as he showed a 1,500-square-foot (139-square-meter) three-bedroom, one-bath condo listed at $1.15 million. He said he had double the traffic the weekend after ride-hailing company Lyft went public in March. The condo, which needed updates, sold above asking price.

“You’re going to have a period of incredible demand not just from tech, by any means, but by (interest) rates being lowered in the last week,” Townsend said. “The real problem is we can’t even remotely meet demand.”

The market for single-family houses under $2 million is going nuts, especially in neighborhoods attractive to millennials and young families, said Realtor Monica Sagullo.

The IPOs are “in the back of people’s minds, and the people who have to buy are the ones who are going for it — the families that need houses, the double-incomes,” she said.

A family of four earning $117,400 a year is considered low-income in San Francisco, where the median sale price of a two-bedroom is $1.3 million. Yet every night, the city of 885,000 also has about 4,400 people sleeping unsheltered, in alleys and doorways and tucked away in Golden Gate Park.

San Francisco opened its first homeless “navigation center” in 2015 and currently operates six throughout the city. Unlike traditional shelters, the centers allow people to bring pets and don’t kick them out in the morning.

The proposed navigation center in the Embarcadero is a critical part of the mayor’s campaign pledge to open 1,000 new shelter beds by the end of 2020. It would sit in a parking lot owned by the Port of San Francisco.

Commissioners are scheduled to vote Tuesday on whether to lease the land to the city.

After Breed’s plan was announced, opponents started a GoFundMe campaign to fight it, called “Safe Embarcadero for All.” Shelter supporters quickly called out the campaign on social media, and a sometimes-nasty battle ensued. The campaign against the shelter has raised $100,000, while the campaign for it, called “SAFER Embarcadero for ALL,” is at $175,000, including $25,000 from Twitter’s Dorsey and $10,000 each from Salesforce founder Marc Benioff and Twilio chief executive Jeff Lawson.

The high-rises surrounding the lot are pricey. A three-bed, three-bath in The Brannan condo towers sold for nearly $2.5 million in February; the monthly dues are $1,200. In the nearby Watermark building, which has a rooftop pool, a two-bed, two-bath condo sold for more than $1.3 million in October — also with monthly dues above $1,000.

“It’s very hard for people who are not on the very high end of things, in terms of wealth, to feel like they can even make it in San Francisco, or own or commit over the long term to be here, and that creates a lot of anxiety,” said Supervisor Matt Haney, who represents the district and supports the shelter plan.

Haney, who rents a studio in the dilapidated Tenderloin neighborhood, has introduced legislation requiring each of San Francisco’s 11 districts to make space for a homeless shelter.

Plenty of supporters of the waterfront proposal, including those who live in the neighborhood, say the shelters are safe and opponents are being heartless. But opponents say a shelter is inappropriate in a neighborhood filled with tourists and children, and not many homeless. They worry about crime and property values and want to know why the navigation centers are not evenly distributed around San Francisco.

“Other people in the city casting us as wealthy people who don’t like to see the homeless population, it’s not true at all,” said Wallace Lee, a stay-at-home dad who is leading the opposition.

Stacey Reynolds-Peterson has rented a two-bedroom, below-market unit in a building near the proposed shelter since 1991, when the area was full of grim warehouses. Retired because of disability, she puts most of her income toward the $2,700 monthly rent, and is considering moving north because she can’t afford San Francisco.

“We have homeless people. I see them every day, and they’re nice people, but this is going to attract more,” she said. “I used to love the city and be proud of the city. Now I’m not anymore. It’s dirty, and it’s ugly.”