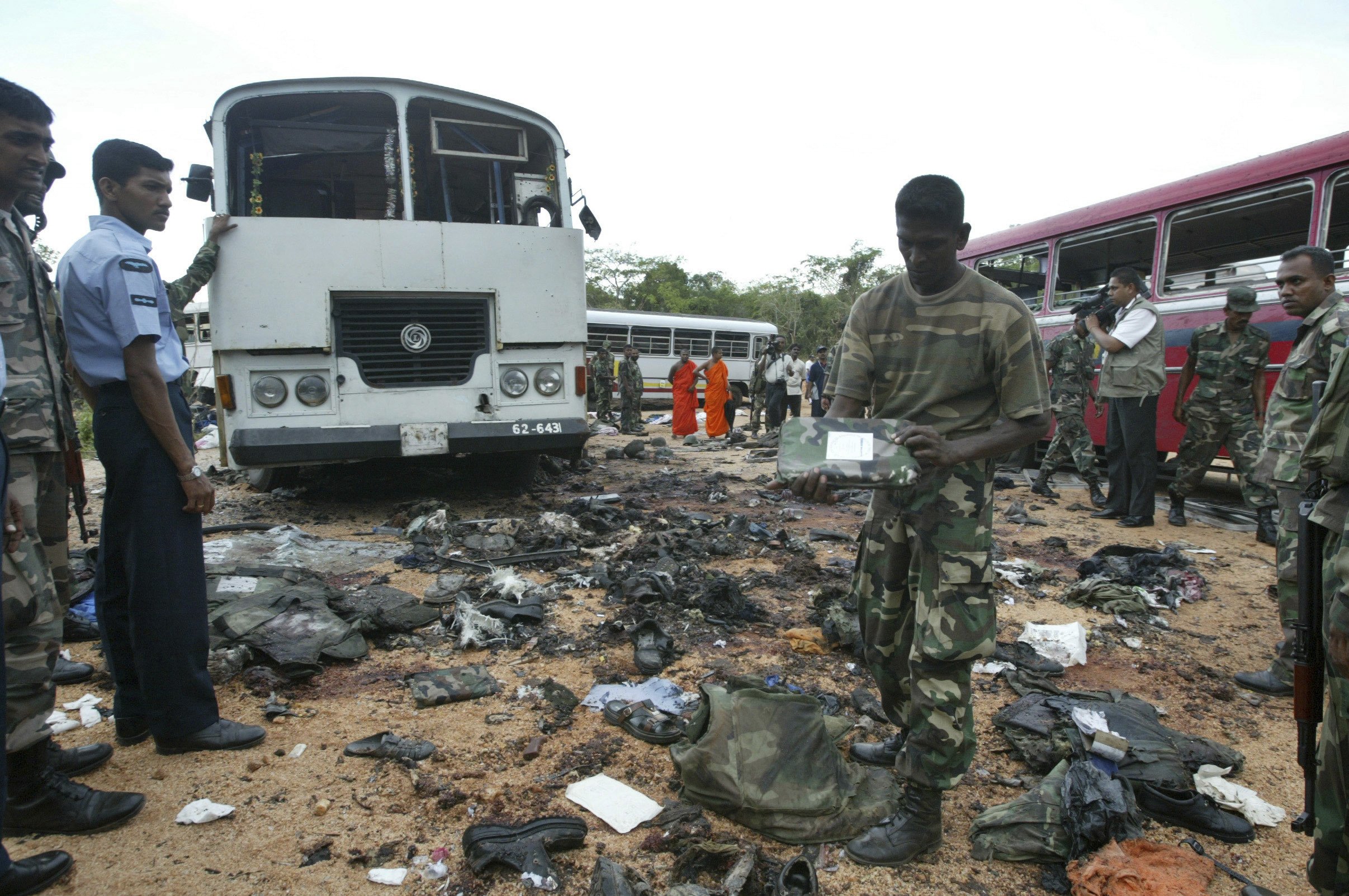 COLOMBO, Sri Lanka — The deadly Easter attacks in Sri Lanka are a bloody echo of decades past in the South Asian island nation, when militants inspired by attacks in the Lebanese civil war helped develop the suicide bomb vest.

Government ministers have said seven Sri Lankans from a little-known local group carried out the six near-simultaneous bombings at churches and hotels that killed at least 290 people and wounded over 500. While little else was known about the group or their motives, Sri Lanka’s Tamil Tiger fighters used suicide bombing in the country’s 26-year civil war before being wiped out by government forces.

Similar bombs would then detonate across Israel, wielded by Palestinian militants, and later across the wider Middle East, Africa and Europe by Islamic extremists in the wake of the Sept. 11, 2001, attacks.

Such attacks strike fear around the world because of their indiscriminate slaughter of civilians, like those eating breakfast at a hotel or worshipping in a church on Easter. Sunday’s assault also raises questions about whether the perpetrators had help or experience from abroad.

“I call today the age of the suicide bomber. This is very much a time of extreme acts that have to, in a way, usurp the previous attacks,” said Iain Overton, executive director of the London-based group Action on Armed Violence who wrote a book on suicide bombings. “They have to be much more devastating, more impactful, more hurtful, to get as much media headlines as possible.”

Experts put the first modern suicide bombing in 1881, when a radical killed Tsar Alexander II of Russia. What may be the first photographs of a suicide bomb vest came in the 1930s when China used them in its war against Imperial Japan around World War II. Japanese kamikaze pilots turned their own planes into weapons.

But the shock of the suicide bomber only struck the minds of many in the West in the 1980s with Lebanon’s bloody civil war. Suicide truck bomb attacks struck both the U.S. Embassy in Beirut, killing 63 people, and later a U.S. Marine barracks, killing 231 American troops in the bloodiest day for the armed forces since World War II. The U.S. later would blame the Shiite militant group Hezbollah, which formed out of Lebanon’s civil war, and Iran for the bombings. Both deny involvement.

At that time, however, a small contingent of Tamil fighters was receiving weapons training in Lebanon and took what they learned back to Sri Lanka, Overton said. Their first suicide attack in 1987, in which a bomb-laden truck drove into a Sri Lankan army barracks and killed 55, resembled the U.S. Marine barracks attack.

Over nearly 30 years of civil war, the Tamil Tigers would launch more than 130 suicide bomb attacks, making them the leading militant group in such assaults at the time. They killed a Sri Lankan prime minister and a former Indian prime minister among others, including bystanders. The war ultimately ended in 2009 with the government crushing the Tamil Tigers, with some observers believing that tens of thousands of Tamils died in the last few months of fighting alone.

But while the Tamils were secular nationalists, Islamic extremists in the Middle East would embrace the suicide bomb as a weapon. By the 1990s, Palestinian militants from both Hamas and Fatah would use suicide bombs against Israel. Then al-Qaida under Osama bin Laden would employ them against U.S. embassies in Kenya and Tanzania, and later against the USS Cole off Yemen.

Then came Sept. 11 and the U.S.-led invasion of Afghanistan.

Up until then, there were some 350 suicide attacks worldwide from 1980, said Robert A. Pape, a political science professor at the University of Chicago who directs its Chicago Project on Security and Threats.

The U.S. war in Iraq followed, which fueled bloody sectarian violence that put it on the brink of civil war. Suicide bombers pounded the country. An al-Qaida branch there would morph into the Islamic State group, which would launch its own suicide attacks around the world.

Today, the number of suicide attacks since 1980 is around 6,000, Pape said, with around half in Iraq and Syria alone.

“When we invaded and conquered Iraq, we touched off the largest suicide terrorist campaign in modern times,” he said.

Sri Lankan authorities have blamed a local Islamic group, National Thowfeek Jamaath, for the Easter attacks. However, there is no recent history of Muslim extremist attacks in Sri Lanka, a predominantly Buddhist island nation off the southern tip of India. Nor was there any explanation for how a group previously not known for violence could engineer such a massive attack, which experts said resembled an assault by the Islamic State group or al-Qaida.

“What they are seeking to push is this ISIS mantra, which is ‘We love death more than they love life,’” Overton said, using an alternate acronym for the militants. “It is the icon of a death cult.”

Since the Islamic State group has lost all the territory it once held across Iraq and Syria, there’s been more concern among nations about foreign fighters returning home. Sri Lanka’s justice minister told parliament in 2016 that 32 Muslims from “well-educated and elite” families had joined the Islamic State group in Syria. It’s unclear what happened to them.

“There weren’t many, but there don’t have to be many,” Pape said.