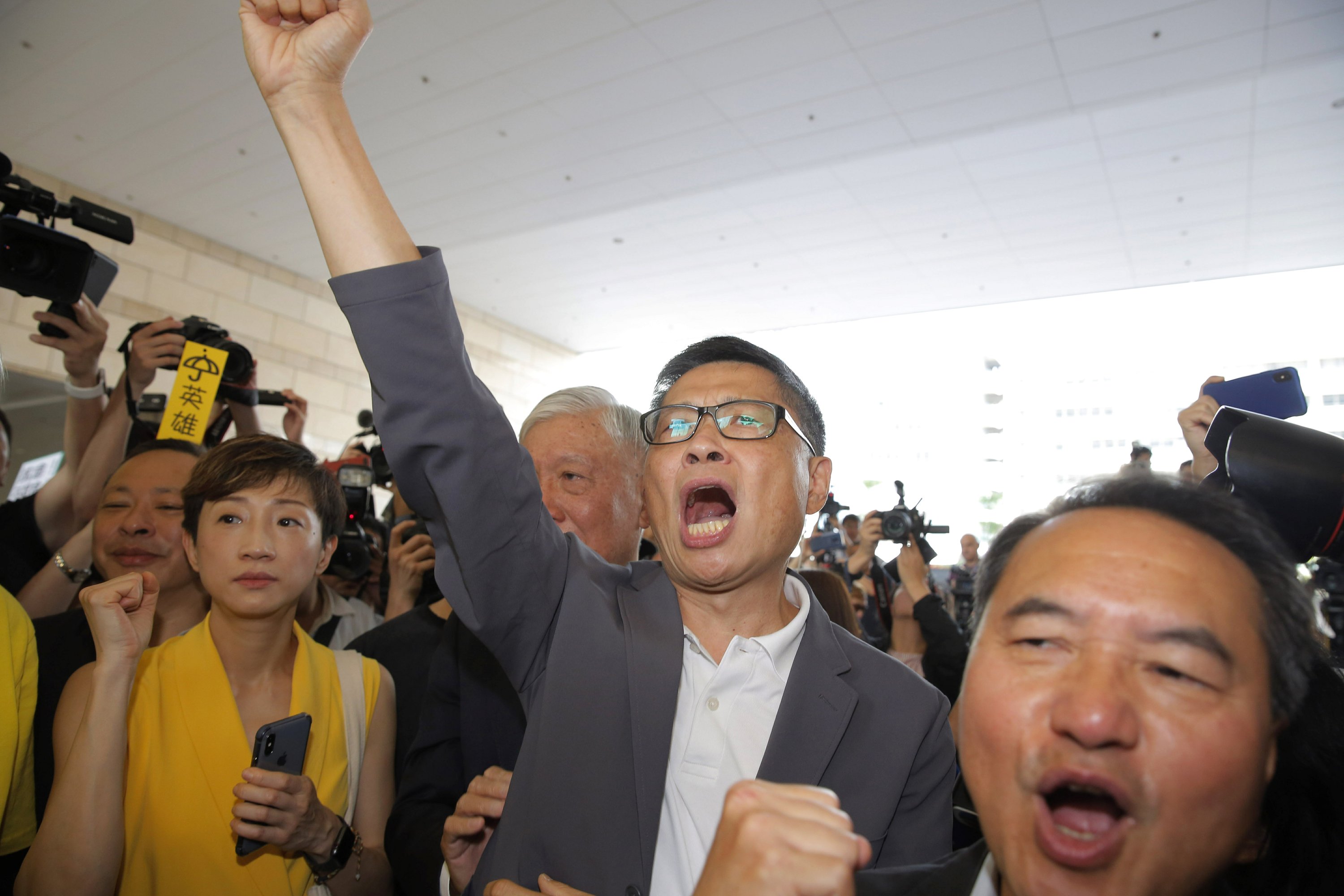 HONG KONG — A court in Hong Kong handed down prison sentences of up to 16 months Wednesday to eight leaders of massive 2014 pro-democracy protests on charges of public nuisance offenses.

The sentences are seen as an effort by the government of the semi-autonomous Chinese territory to draw a line under the protests amid pressure from Beijing.

Ranging in age from their 30s to 70s, the nine defendants span generations of Hong Kong citizens who have been agitating for full democracy. The defendants had all pleaded not guilty, calling the prosecutions politically motivated.

Three protest leaders were given 16 months, one of them suspended for two years, two received eights months in prison and two were given suspended eight-month sentences. Another was ordered to perform 200 hours of community service. One other defendant, Tanya Chan, had her sentencing postponed because of the need to undergo surgery.

It was not immediately clear if they planned to appeal.

“Thank you for the sentencing,” Raphael Wong, given eight months, told Judge Johnny Chan. “Our determination on fighting for genuine universal suffrage will not change.”

While the charges carried potential sentences of up to seven years, they were still seen as unusually harsh by activists in what they called an attempt to intimidate them into silence.

“The long sentences send a chilling warning to all that there will be serious consequences for advocating for democracy,” said Maya Wang, Hong Kong-based chief researcher for China at Human Rights Watch.

“The Beijing and Hong Kong authorities appear intent on eliminating the only pocket of freedoms on Chinese soil,” Wang said. She cited a law against booing the Chinese national anthem and moves to amend the extradition law that could see suspects sent to China where they’d be unlikely to receive a fair trial.

Supporters and family members applauded the defendants as they entered the courtroom, then stood outside sobbing after the hearing before breaking into chants.

Those convicted included law professor Benny Tai, retired sociology professor Chan Kin-man and pastor Chu Yiu-ming, who all received 16 months though Chu’s was suspended for two years. The others include two current and one former lawmaker, two student leaders and a political activist.

Chan, who will be sentenced June 10, said prior to the hearing that she hadn’t lost faith in what the movement stood for. “Although it’s an uphill battle, it’s not easy, it’s time for us to make sure that we are strong enough to face different kind of challenges,” Chan said.

The nine were leaders of the “Occupy Central” campaign, which was organized as a nonviolent sit-in that became known as the “Umbrella Movement” after a symbol of defiance against police adopted by the street protests.

Protesters demanded the right to freely nominate candidates for Hong Kong’s leader who would then be elected by all of the territory’s roughly 5 million voters. However, they failed to win any concessions from the government, and Hong Kong Chief Executive Carrie Lam was chosen in 2017 from among a slate of candidates approved by Beijing and elected by a 1,200- member pro-China electoral body.

Hong Kong, a former British colony, was handed over to Chinese rule in 1997 under an agreement in which China promised the city could retain its own laws, economic system and civil rights for 50 years.

However, Chinese President and Communist Party leader Xi Jinping has been seen as extending his crackdown on civil liberties to Hong Kong, drawing criticism from commercial and legal associations as well as political, human rights and media groups.

“In the verdict, the judge commented we are naive, believing that by having a occupy movement we can attain democracy. But what is more naive than believing in one country two systems?” Chan Kin-man said before the sentences were issued.

In Taiwan’s capital Taipei, youthful supporters rallied to denounce the convictions and growing pressure from Beijing on both their self-ruled island and Hong Kong.

China has demanded Taiwan agree to its claim to the island as Chinese territory, to be annexed by force if necessary, and accept a “one country, two systems,” framework for governing along the lines of that in place in Hong Kong.

“Occupy Central is not a crime,” they chanted, as well as the “The Hong Kong government is unjustified.”

“The fact that you care about Hong Kong means you care about your own fate. I think this is very important,” Tien-chi Martin-Liao, a member of Independent Chinese PEN Center, said in an address following the sentencing hearing.

“Your support will be felt in the hearts of those persecuted in Hong Kong, and those who live there,” he said.