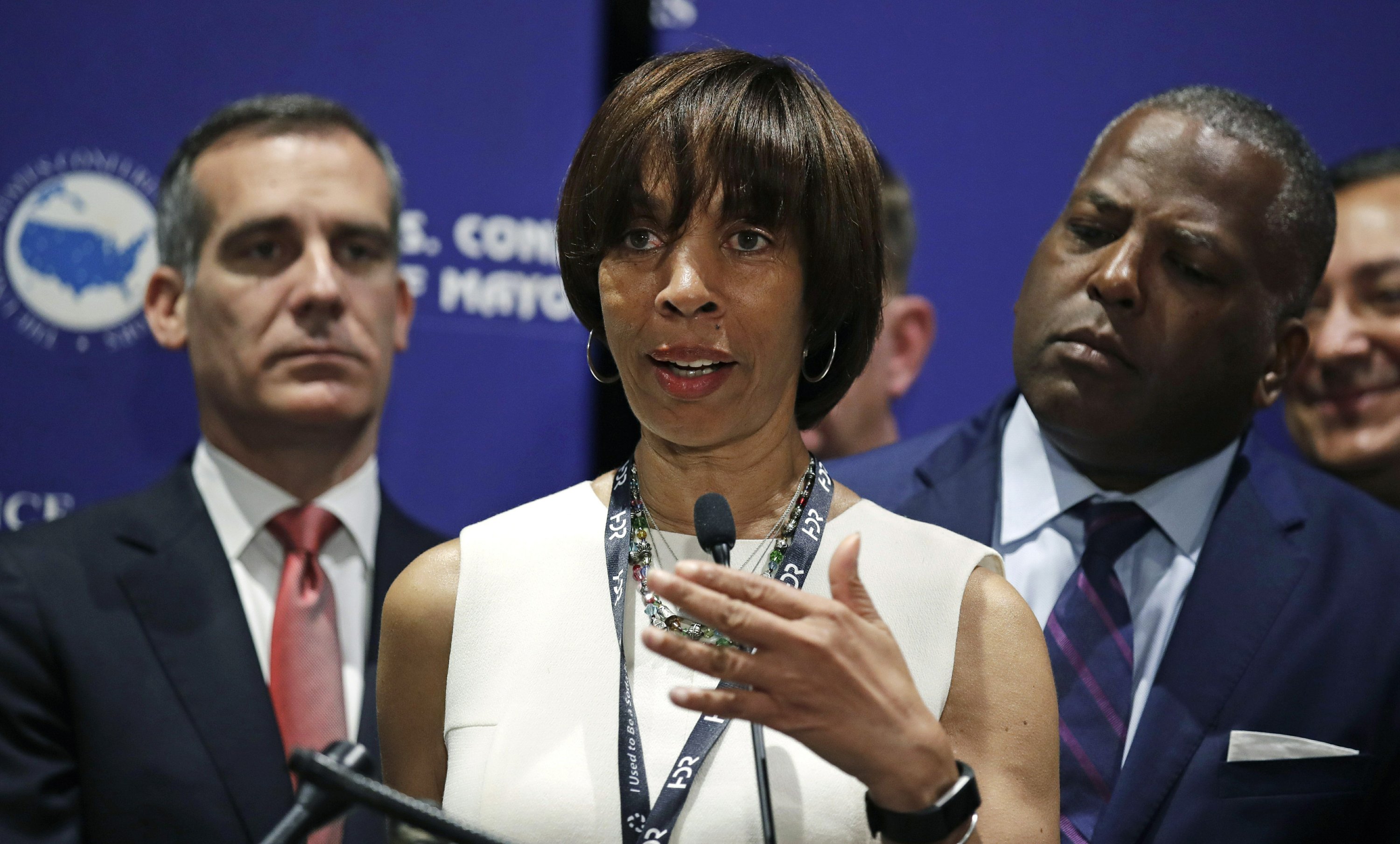 BALTIMORE — Federal agents raided the homes and offices of Baltimore’s embattled mayor on Thursday amid widening probes to determine whether she used sales of her children’s books to disguise government kickbacks.

Agents with the FBI and the IRS criminal division in Washington were searching both of Mayor Catherine Pugh’s homes, several offices at City Hall, her lawyer’s office, the home of a top aide and other places, said Dave Fitz, a spokesman for the FBI in Baltimore. He said he couldn’t release more information because the warrants are sealed.

Pugh has faced mounting calls for her to resign over a scandal involving her self-published children’s books, which she sold to a health plan that does business with the city, as well as to the University of Maryland Medical System, on whose board she sat while serving as a state lawmaker. Pugh sold $500,000 worth of the books to the $4 billion hospital network over the years, while pushing legislation that would have benefited the regional system.

The federal case comes amid a criminal investigation by the state prosecutor’s office, which began at the request of Republican Gov. Larry Hogan, as well as probes by the Baltimore Inspector General, a city ethics board and the state insurance commission.

“Mayor Pugh has lost the public trust. She is clearly not fit to lead,” Hogan declared in a statement Thursday. “For the good of the city, Mayor Pugh must resign.”

After several hours searching inside City Hall, a half dozen federal agents carried out cardboard boxes and heavy-duty black cases that likely held computer equipment. Other agents searched her homes, which were cordoned off with yellow police tape.

City Council member Brandon Scott reiterated the council’s unanimous demand for her resignation, calling the spectacle “an embarrassment to the city.”

Pugh remained silent Thursday morning. Her spokesman, James Bentley, said he hadn’t spoken with her and doesn’t know where she is. Her defense attorney, Steve Silverman, whose office also was searched, did not immediately return calls.

It’s been more than three weeks since Pugh slipped out of sight, citing deteriorating health from a pneumonia bout. Six of her staffers joined her on paid leave; on Wednesday, the acting mayor fired three of them.

Pugh said she was going on leave on the same day Hogan asked for the investigation of her “Healthy Holly” book sales, which earned about $800,000 for her limited liability company. Since then, the first-term mayor also has been asked to resign by all the Baltimore lawmakers in Maryland’s House of Delegates, the influential Greater Baltimore Committee business group and others.

But only a conviction can trigger a mayor’s removal from office according to the state constitution, and Baltimore’s mayor-friendly City Charter provides no options for ousting its executive. “The charter is utterly silent on how long the leave can last, exactly what the reasons are for a leave,” Davis said.

Members of Pugh’s communications staff have said repeatedly that she intends to return to City Hall when she is feeling better, but have declined to provide any timetable.

At this point, political analysts said, Pugh’s biggest bargaining chip is her refusal to resign in a city accustomed to a high-drama, insular political culture.

Pugh came to office in late 2016 after edging out ex-Mayor Sheila Dixon, who had spent much of her tenure fighting corruption charges before being forced to depart office in 2010 as part of a plea deal connected to the misappropriation of about $500 in gift cards meant for needy families.

While the accusations have certainly cast a shadow over Pugh, she has not been indicted for any crime, and it is unclear how long a criminal investigation will take. Earlier this month, Silverman said the mayor was looking forward to cooperating with the state prosecutor’s probe and would provide “as much information as possible to put this matter to rest.”

Pugh would certainly face a bruising 2020 Democratic primary if she were to return and run for reelection. Many political observers believe she’ll never again be able to wield power effectively due to the scandal.

Veteran City Council leader Bernard “Jack” Young, who is serving as acting mayor, said as she went on leave that he would merely be a placeholder. But this week, given the groundswell of opinion against her, he said “it could be devastating for her” if she tried to return.