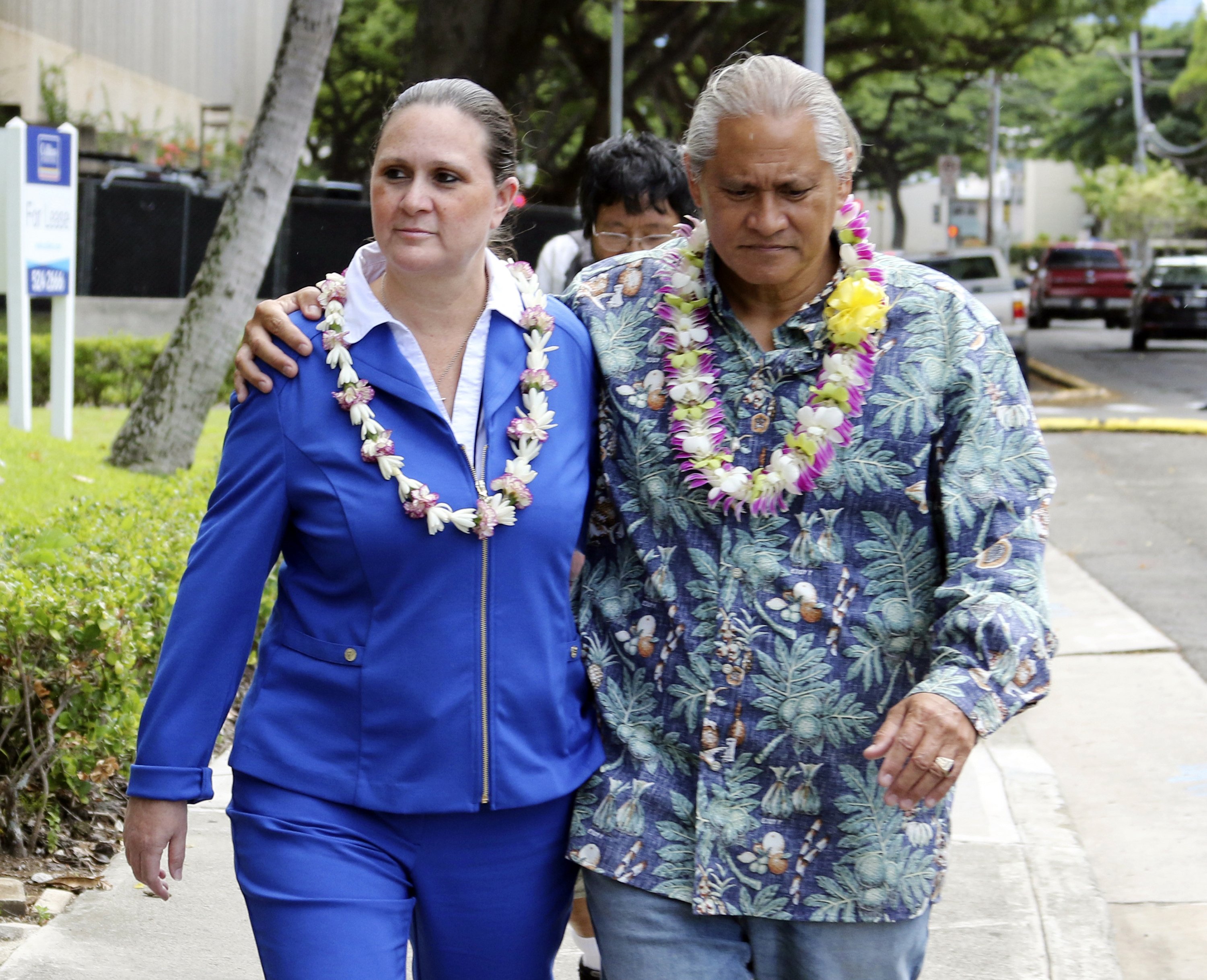 HONOLULU — He was Honolulu’s Rolex-wearing police chief, an avid surfer who chatted with beat cops in Pidgin, Hawaii’s creole language. She was his deputy city prosecutor wife, who drove a Maserati and led an elite unit targeting career criminals while showering lunches on colleagues, friends and even the workers renovating her home.

For years, Louis and Katherine Kealoha were the city’s law enforcement power couple, enjoying widespread respect as Native Hawaiian role models who hailed from humble, blue-collar roots and rose to the top thanks to decades of hard work. They lived in a swanky house near an exclusive country club in the city’s Kahala neighborhood, sometimes called Honolulu’s Beverly Hills.

Then the white mailbox perched on a pedestal in front of their house disappeared, triggering a drawn out disintegration of the couple’s reputation amid a twisted tale of allegations involving fraud, illegal drugs and an attempt to frame Katherine Kealoha’s uncle for stealing the mailbox.

Federal authorities started investigating the two in 2015, and both stepped down from their jobs as the probe deepened. Now the Kealohas are heading to trial next month on federal charges of conspiracy, obstruction and false statements to a federal officer involving the mailbox case. The obstruction charge carries the heftiest sentence — up to 20 years in prison.

Katherine Kealoha, 48, and her physician brother, Rudolph Puana, are also expected to be tried later on separate allegations that the siblings bartered opioids for cocaine. The Kealohas and Puana have denied all of the charges.

The case has morphed into a scandal characterized as the largest corruption prosecution in Hawaii history — and prosecutors say greed was the couple’s motive.

They allege the Kealohas were so desperate to fund their lavish lifestyle that they swindled more than a half-million dollars from banks, relatives and children whose trust funds Katherine Kealoha controlled when she was a lawyer in private practice.

Prosecutors say Katherine Kealoha’s uncle and her now-99-year-old grandmother threatened to expose the fraud, so she devised a scheme to silence them by attempting to have her grandmother declared incapacitated and conspiring with her 58-year-old husband and members of a special police unit hand-picked by him to frame the uncle, Gerard Puana, for stealing the Kealohas’ mailbox.

Honolulu police arrested the uncle on a felony charge of mailbox theft in 2013. Puana’s lawyer, federal public defender Alexander Silvert, was initially skeptical about his client’s claim that he was being set up in an attempt to discredit him over a lawsuit he had filed claiming Katherine Kealoha used a reverse mortgage scheme to steal money from him and his mother, Florence Puana.

The Kealohas reported the mailbox as a Gaines model valued at $380 — but Silvert said he and his investigators learned it was actually made by a different manufacturer and cost only $180. The difference in value allowed Puana to be charged with a felony instead of a misdemeanor.

“When I realized they were lying about the make and model of the mailbox, then I was ‘OK, there’s something going on,’” Silvert said.

Federal prosecutors said in court documents filed in the upcoming case against the Kealohas that the couple concocted the mailbox scheme to silence her uncle.

“Their reputations, careers and livelihood were seriously threatened by what the Puanas’ lawsuit could bring to light. So they moved to silence and imprison him,” prosecutors said. “Public embarrassment was not something the Kealohas could afford. They needed to maintain their carefully crafted public image.”

Puana’s mailbox theft case ended in a mistrial in 2014. In 2015, a jury sided with Katherine Kealoha in the civil lawsuit her grandmother and uncle lodged against her.

Federal investigators stepped in — eventually revealing allegations against Katherine Kealoha, including stealing trust funds from children, showering money she bilked on a firefighter lover and the alleged drug-dealing with her brother. They allege she even invented an alias — Alison Lee Wong — “to dodge scrutiny, forge documents, secure state Senate confirmation, and more.”

In 2017, she and her husband were indicted on the federal criminal charges. They have since lost their expensive home to foreclosure proceedings and have taxpayer-funded, court-appointed defense attorneys.

Still, their public persona belies this fall from grace as they arrive at court hearings holding hands and wearing color-coordinated outfits. After pleading not guilty after they were indicted in October 2017, the Kealohas left court arm-in-arm wearing lei — an odd sight because lei are associated with celebratory events like birthdays to graduations, certainly not criminal court matters.

Louis Kealoha’s lawyer, Rustam Barbee, told The Associated Press this month that “after 30-plus years of protecting and serving the community here in Honolulu, the chief has earned the right of the presumption of innocence.” His wife’s lawyer, Cynthia Kagiwada, declined comment on the upcoming federal criminal trial.

Hawaii has never had a corruption case like this before, said Neal Milner, a retired University of Hawaii at Manoa political science professor. He said the islands have had their share of organized crime and crooked politicians but the charges the Kealohas face are “an unprecedented kind of alleged corruption.”

In possible wider legal ramifications, questions have also been raised about possible wrongdoing in prosecutions Katherine Kealoha handled, and federal authorities investigating the couple have notified Honolulu’s elected prosecuting attorney — Katherine Kealoha’s former boss — and the city’s chief lawyer that they are also targets in the probe.

Neither Kealoha was born into the luxury that prosecutors say they craved.

Katherine Kealoha rode a city bus as a child for more than an hour to get to school from rural Kahaluu on Oahu’s verdant and mountainous windward coast where her father was a fisherman. And Louis Kealoha lived in gritty neighborhoods, including Halawa Valley, where his mother supported the family with a small lunch shop.

He dropped out of a community college to join the Honolulu Police Department in 1983, saying he liked surfing more than school. She graduated from the University of Hawaii’s law school in 1995.

He rose through the ranks of the police department, and eventually earned a bachelor’s degree. The two met while getting their master’s degrees in criminal justice administration at Chaminade University, a small Catholic school in Honolulu, according to a 2010 Mid-Week newspaper article about how the new chief was instilling Native Hawaiian values while leading the police force.

Louis Kealoha ended up earning a doctorate in 2006 through a University of Southern California program in which professors traveled to Honolulu on weekends, according to a 2013 USC publication. Describing his decision to seek higher education, he said his grandparents never attended school and his father had a sixth-grade education.

“Nobody in my family was a supervisor of anything. We were all rank and file,” the USC article quoted him as saying. “I thought it would be so cool to create a different path for my family.”

Randal Lee, a retired Honolulu judge, recalls running into Katherine Kealoha at the height of the couple’s prosperity around 2008 and asking her where she and her husband were living.

When she told him the Kahala enclave of multimillion-dollar homes, he said he thought to himself: “How could they afford that, man?”