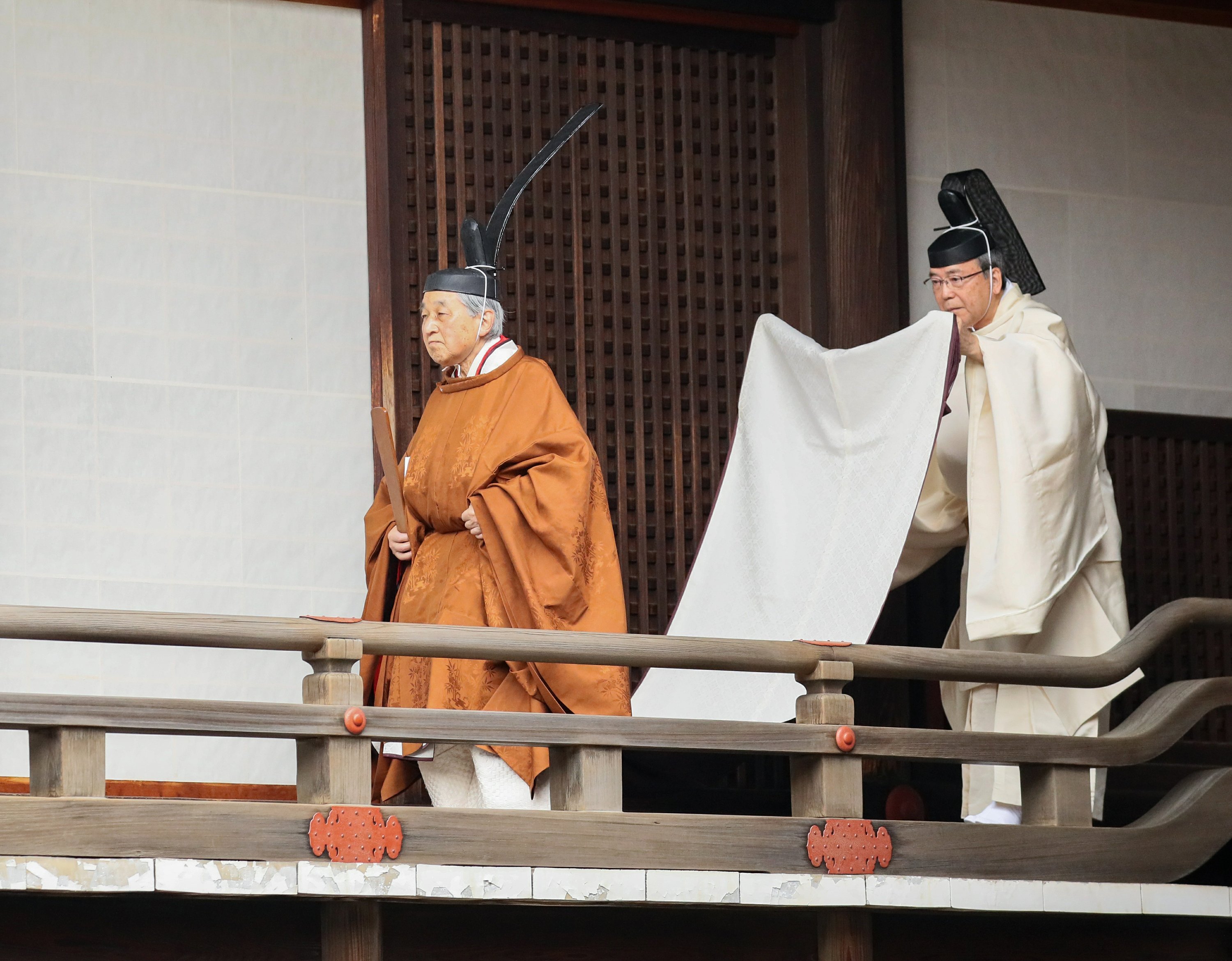 TOKYO — Emperor Akihito began his abdication rituals at a Shinto shrine Tuesday morning as Japan embraces the end of his reign with reminiscence and hope for a new era.

Television images showed Akihito in a traditional robe entering the main Shrine of Kashikodokoro to report his retirement to the gods. The shine is where the goddess Amaterasu, said to be the direct ancestress of the imperial family, is enshrined. Only part of Akihito’s shrine ritual was released to the public.

In a palace ritual later in the day, Akihito will announce his retirement before other members of the royal family and top government officials.

His reign runs through midnight when his son Crown Prince Naruhito becomes new emperor and his era begins.

Naruhito will ascend the Chrysanthemum throne Wednesday. In a separate ceremony, he will inherit the Imperial regalia of sword and jewel, as well as Imperial seals as proof of his succession as the nation’s 126th emperor in the world’s oldest hereditary monarchy from the 5th century.

Akihito, 85, took the throne in 1989 and devoted his career to making amends for a war fought in his father’s name while bringing the aloof monarchy closer to the people.

With his commoner-born wife, Empress Michiko, he reached out to the people, especially those who faced handicaps and discrimination, as well as those hit by disasters, illuminating the hardships of people often overlooked by society.

Akihito’s efforts won him widespread respect, and recent media surveys have shown public support for the imperial family at 80 percent, the highest ever for the institution.

Such respect did not come overnight. Akihito grew up during World War II and was 11 when his father Hirohito announced the end of the war on radio. Akihito embraced his role as peacemaker and often represented his father on reconciliatory missions as young crown prince, decades before he became the emperor himself.

He is the first emperor in Japan’s modern history whose era did not have a war. Though he has avoided outright apologies, he has stepped up his expressions of regret in carefully scripted statements on the war.

Akihito visited China in 1992 and offered what was considered the strongest expression of regret over the war. He has also visited the Philippines and other Pacific islands conquered by Japan that were devastated in fierce fighting as the U.S.-led allies took them back.

Akihito will be known as the emperor emeritus and will no longer have official duties after he abdicates. He won’t even attend his son’s succession rituals so as not to interfere with the serving emperor.

Akihito is expected to enjoy his retirement, going to museums and concerts, or spending time on his goby research at a seaside Imperial villa. Akihito and Michiko will move to a temporary royal residence before eventually switching places with Naruhito.