Impeach or investigate? Democrats see no reason to choose 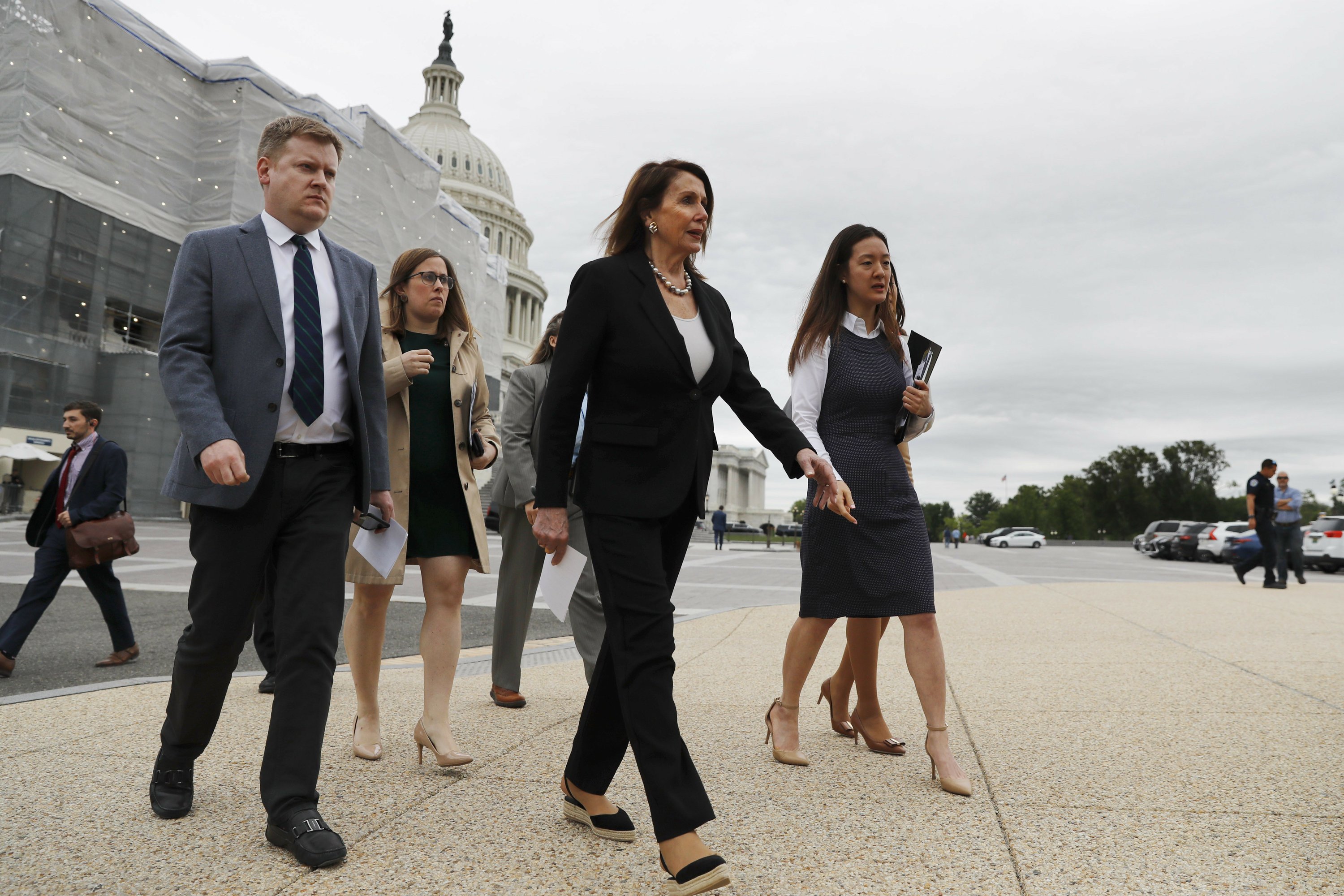 WASHINGTON — Whatever happens next, don’t call it impeachment.

House Democrats have been careful not to rush to impeachment proceedings against President Donald Trump in the aftermath of Robert Mueller’s report, despite calls to do so by high-profile lawmakers and 2020 presidential contenders. But as Congress resumes Monday, the Democratic oversight and investigations agenda is starting to look a lot like the groundwork that would be needed to launch an impeachment inquiry. At some point, it’s a political difference rather than a practical one.

The Judiciary Committee is scheduled to hear testimony from Attorney General William Barr on Thursday, despite resistance from the administration. The Oversight Committee has reached an agreement with the White House for testimony this week on security clearances. The Intelligence Committee is probing Trump’s financial dealings. And the Ways & Means Committee is pursuing Trump’s tax returns.

“The House has such broad oversight powers that it really doesn’t matter whether they’re geared toward impeachment, toward legislating, toward overseeing the functioning of the executive branch, etc.,” Chafetz said. “At the end of the day, for the purposes of the powers available to the House, I don’t think it makes much of a difference whether they use the word ‘impeachment’ or not.”

House Speaker Nancy Pelosi has insisted the door is neither open, nor closed, to impeachment. Instead, she says, Congress is taking a step-by-step approach in exerting its role as a check on the executive branch. It will lead wherever it leads, and the public can decide.

While Republicans and others in Washington are ready to move on from the report from special counsel Robert Mueller, Democrats in Congress are still fighting to see it. The Judiciary Committee chairman, Rep. Jerrold Nadler, D-N.Y., subpoenaed for a full and un-redacted copy of the 400-page report, and its underlying materials. He also wants Mueller to testify before the panel by May 21.

Pelosi suggests that Congress will have more to say on impeachment after lawmakers — and the American public — digests the findings of the two-year probe of Russian interference in the 2016 election and possible obstruction by Trump.

“In every way he is unfit to be the president of the United States,” Pelosi said in an interview with The Associated Press earlier this month. “Does that make it — is that an impeachable offense? Well it depends on what we see in the report.”

Pelosi says she sets a “very high bar for impeachment because I think it’s very divisive in the country.”

In many ways, House Democrats are trying to have it both ways — pursuing the investigations that could serve as a prelude to impeachment proceedings without taking the politically fraught step of calling it impeachment.

The balancing act reflects recent polling that shows Americans are interested in getting more information, but also split. A poll by The Associated Press-NORC Center for Public Affairs Research ahead of the report’s release this month showed that even with the Mueller probe complete, 53% said Congress should continue to investigate Trump’s ties with Russia, while 45% said Congress should not. A similar percentage, 53%, said Congress should take steps to impeach Trump if he is found to have obstructed justice, even if he did not have inappropriate contacts with Russia.

While high-profile Democrats, including Rep. Alexandria Ocasio-Cortez, D-N.Y., and presidential contenders Elizabeth Warren and Beto O’Rouke, have called for the House to begin impeachment proceedings, others have not.

For many House Democrats, particularly newly-elected freshmen representing districts Trump won in 2018, putting their names to a floor vote to launch an impeachment inquiry would likely become politically fraught.

Sarah Binder, a professor of political science at George Washington University, said as long as those cross currents exist within the House Democratic caucus, “it’s in Pelosi’s interest to slow down the impeachment train, but hold the administration accountable for Trump’s first two year in office.”

At this stage, whether Congress is conducting oversight or holding impeachment proceedings, the tools are mostly the same — subpoenas, hearings, investigations.

But that could change, as Trump is refusing to comply with subpoenas for administration officials to testify and blocking Congress from obtaining more information.

Barr, who is set to appear Wednesday before Senate Judiciary Committee, where Republicans have the majority, has informed the House that he may not appear Thursday if Democrats insist on having committee staff from both sides question him after lawmakers do. Unbowed, Democrats scheduled a committee vote for Wednesday to allow the staff questions.

Pelosi, in a brief interview Monday, said Barr would be “obstructing Congress” if he decided not to testify. Witnesses, she said, can’t “tell the committee how to conduct its interviews.”

Those tensions set up a legal battle that will test the balance of power between the executive and legislative branches and could become a defining one for this Congress and this administration.

The outcome remains uncertain. It’s not at all clear that the House will ever fully broach the topic of impeachment, and such proceedings have been rare in Congress. The House has impeached just 19 people, mostly federal judges, and fewer than half ended up being convicted by the Senate, according the Congressional Research Service.