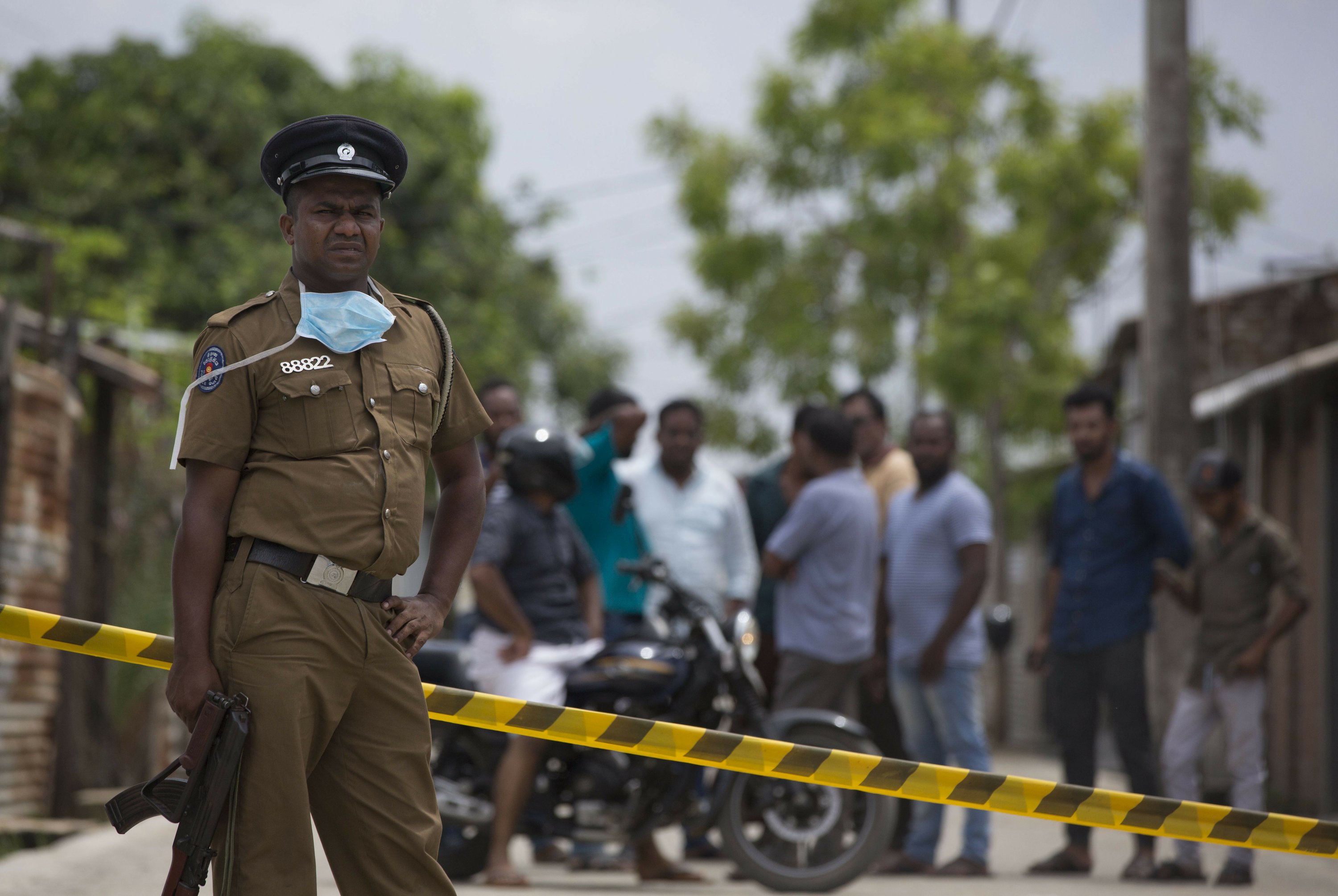 KALMUNAI, Sri Lanka — Suicide bombings at a militants’ safe house have shaken the simple homes of this east Sri Lankan town as well as the rest of this idyllic coast, as the investigation into the Islamic State-claimed Easter bombings has spread here.

Police and military checkpoints dot the coastal roads, with people emptying out of buses to present their identity papers. On streets lined with shuttered shops, police officers with assault rifles look warily at passers-by. Whispers persist about the leader of the IS-pledged militant group, which preached the promise of heaven through the killing of others both here and online.

The scale of the explosives seized following Friday night’s violence, as well as the continued warning of authorities that more militants remain on the loose, only add to the dread.

“Even though the security forces are here, it’s not like earlier,” said Chandima Krishanthi, a 42-year-old market vendor in nearby Ampara. “We are living in fear. It’s nothing like it used to be.”

Sri Lanka’s eastern coast was a battleground in the island nation’s 26-year civil war with the Tamil Tiger rebels, a group of secular nationalists who launched over 130 suicide bombings themselves. The war ultimately ended in 2009 with the government crushing the Tigers, with some observers believing that tens of thousands of Tamils died in the last few months of fighting alone.

Violence here in Kalmunai, some 225 kilometers (140 miles) northeast of the capital, Colombo, shattered nearly 10 years of peace on Friday night. One neighbor, Ahamed Mohammed Rizwan, told The Associated Press that leaders at his mosque asked him and two others to go the militants’ house and check on them as he knew the people living there.

As they approached, one man opened the gate and said, “Peace be upon you,” Rizwan said. He replied the same way and they entered the compound and began talking. Suddenly, another man appeared with a Chinese variant of the Kalashnikov assault rifle and aimed it at Rizwan’s chest, saying, “God is the greatest.”

Rizwan and the other men fled and found two traffic police officers, who then started walking toward the house. The militants opened fire, sparking the confrontation, Rizwan said. Those inside later detonated suicide vests, killing themselves and others.

AP journalists walking through the neighborhood Sunday found evidence of the firefight. Spent 7.62 mm cartridges littered the ground, likely from the assault rifle one of the militants carried. Down the street, bullet holes punctured the cement block walls of neighbors’ homes.

Around the house, the scale of the violence became even more clear. A limb still lay in a drainage ditch. The roof of the home had been blown off by the power of the explosion, pages of religious tracts in Arabic lying atop it.

Inside the home, lined notebooks had a child’s shaky Arabic calligraphy. Police also laid out white linen women’s dresses recovered from inside, similar to those worn by Buddhists when they go to temple. Investigators spoke softly to each other, wondering if that meant the militants planned to expand their targets beyond Christian churches.

Soldiers waited until sunrise Saturday before entering the home, ending the violence that killed 15 people. Amid the blood-stained walls and shattered glass, they found a young girl, as well as a woman. Police spokesman Ruwan Gunasekara later identified them as the wife and 4-year-old daughter of Mohammed Zahran, the alleged mastermind behind the Easter Sunday bombings of three churches and three hotels that killed over 250 people.

Meanwhile, in nearby Kattankudy, the mosque of National Towheed Jamaat, the organization that Zahran once led, found itself raided by police and military Sunday. Authorities searched and shut down the center just within eyesight of the waves of the Bay of Bengal.

The Islamic State group claimed Friday night’s suicide bombings, saying early Sunday morning that “with success from Allah the Almighty” the attackers blew themselves up.

But police discovered the bodies of six children inside of the home, all likely the victims of a powerful blast that tore away part of the home’s roof and sent out a deadly wave of small metal balls.

Sifting through debris Sunday afternoon, a police officer discovered the arm of what appeared to be an infant. He cupped it in his gloved hands, blackened from the soot.

“These people are animals,” he said. “How can they have children then blow up these children?”

The officer gently laid the child’s arm down next to a charred assault rifle magazine, a license plate and pieces of a cellphone. It was now evidence of even greater crimes.