No arrests day after chaotic shooting attack in Baltimore 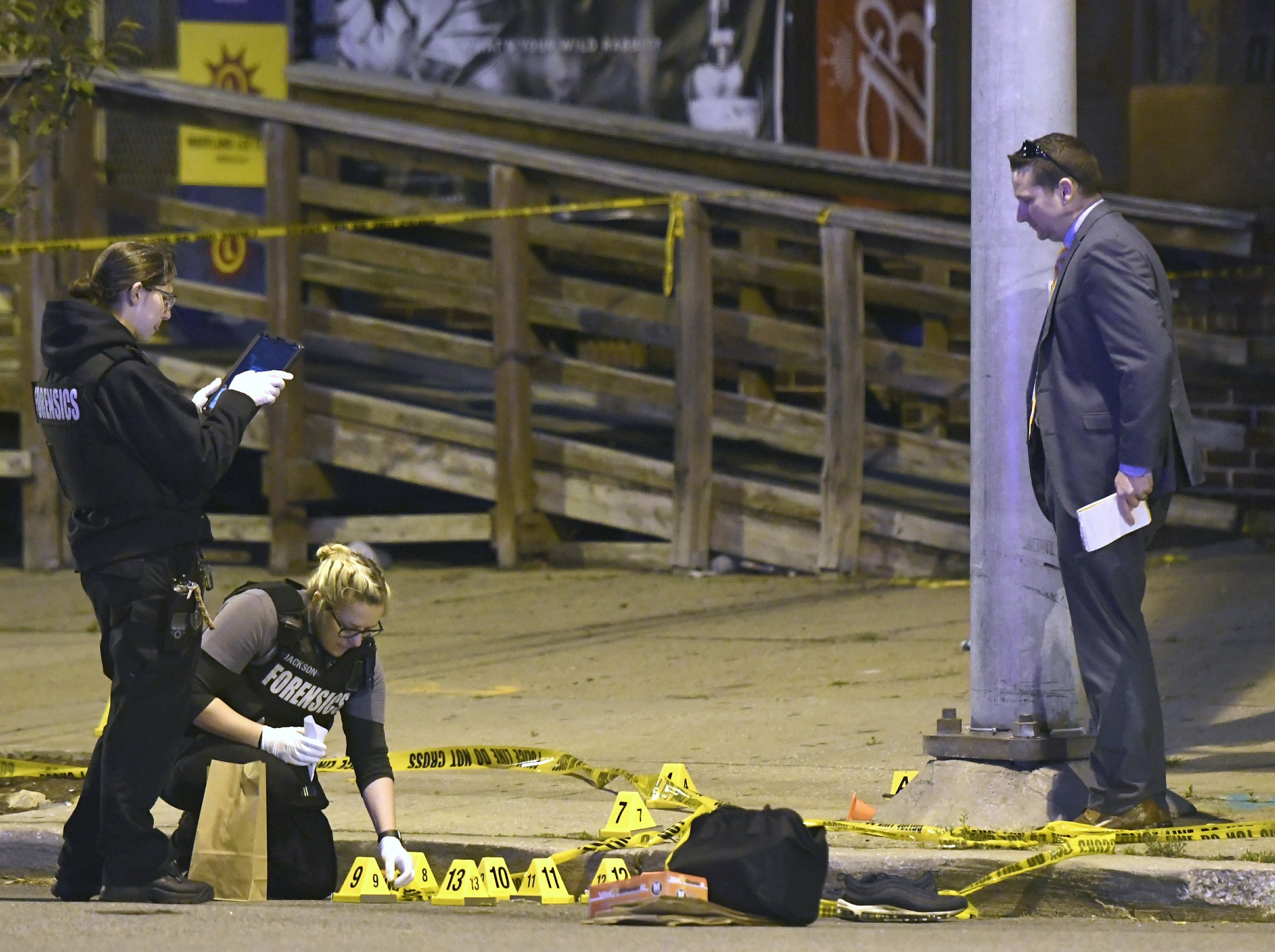 BALTIMORE — Baltimore police detectives are trying to figure out whether a chaotic shooting attack on a crowd enjoying a weekend cookout might be competition between underworld groups, a triggerman seeking vengeance or another kind of senseless strike.

But one thing’s for certain: In a city accustomed to gun violence, the Sunday afternoon shooting that killed one and wounded seven others in a gritty West Baltimore neighborhood barely stands out in a sea of similar shootings.

And with no arrests a day after the bloodshed at the crowded cookouts, police investigators might again be struggling to overcome Baltimore’s strong anti-informant culture that chronically makes eyewitnesses to shootings and other crimes too afraid or simply unwilling to come forward.

“It is only with community help that we will be able to identify who did this and hold them accountable,” said Police Commissioner Michael Harrison, who said the shooting appeared to be “extremely targeted.”

“Someone knows something,” he said. “These things … they don’t happen by happenstance. People know who’s doing these shootings.”

Although the motive for the weekend attack is not clear, there has long been an escalating arms race among Baltimore’s criminal gangs that has turned some neighborhoods into battle zones, particularly in the most deeply disenfranchised areas.

Street crews dramatically drive up the rates of violent crime by introducing illegal firearms and narcotics with a street value greatly exceeding the size of the surrounding neighborhood’s legal economy.

The corrosive impact of the drug trade and a recurrence of tit-for-tat turf wars and retaliatory attacks have gotten so bad that researchers say they’ve seen a change in social norms about what is an acceptable way to resolve disputes.

“It’s not going to the police. It seems to be taking things into their own hands and committing a form of violence in return,” Crifasi said in a Monday phone interview.

Jeffrey Ian Ross, a criminologist at the University of Baltimore, agreed, arguing that it’s highly possible that people at the cookout actually know who committed the violence and “they are going to handle this matter on their own,” ignoring local police altogether.

“Trust in police is, perhaps, near an all-time low,” he said.

Ross added there’s no indication that Baltimore’s entrenched “no snitching” culture has eased in recent years, particularly amid recurrent city leadership vacuums and any number of serious problems with the city’s police force, which is under federal oversight for unconstitutional and discriminatory policing.

Baltimore authorities routinely appeal to the public for information to improve its closure rate for homicides and other violent crimes. In recent months, the city’s top prosecutor, Marilyn Mosby, has even started a TV, radio and billboard campaign intended to encourage witnesses to come forward. She says some one third of criminal cases dropped by prosecutors are impacted by witnesses and victims who avoid court.

Witness intimidation has long plagued Baltimore’s criminal justice system. Some point to appalling cases where witnesses were killed, including a family in a 2002 arson after complaining about local drug dealing. And many locals well remember a popular street DVD called “Stop Snitching” that featured drug dealers warning residents they could “get a hole in their head” for cooperating with authorities.

Whether police might be able to overcome a fear of retribution in this investigation or if a retaliatory attack is in the offing is not yet clear.

Harrison said a man approached the crowd of revelers on foot late Sunday afternoon and began firing in what he called “a very tragic, very cowardly shooting.”

The shooting comes roughly six weeks after Harrison’s swearing-in last month as Baltimore police commissioner, when he promised to make the city safer and lead the department through sweeping reforms required by a federal consent decree. It’s a daunting task in one of the country’s poorest major cities where have been more than 300 homicides for four years running. Harrison is the city’s 14th police leader since the mid-1990s.

The commissioner said there were two cookouts taking place on opposite sides of the street Sunday, and that shell casings were found in two locations, indicating that there may have been a second gunman, or someone firing back at the first shooter, who fled on foot. It was unclear whether the cookouts were related, Harrison said.

One man who was shot collapsed behind a Baptist church nearby and was pronounced dead at the scene. Survivors were men ranging in ages from 27 to 58, as well as a 30-year-old woman.

“What we believe is that there was a second shooter, perhaps firing back, but it is still unknown,” Harrison said.

While city leaders continue a perennial quest to remake the city in the eyes of potential investors and visitors, Baltimore has been in the throes of a worrying increase of violent crime since 2015, when the homicide rate spiked after the city’s worst rioting in decades following the death of young black man in police custody.

It’s gotten worse since then. The FBI placed Baltimore’s homicide rate in 2017 well above that of any other large American metropolis, the 342 homicides notched that year yielding a punishing homicide rate of 56 per 100,000 people.