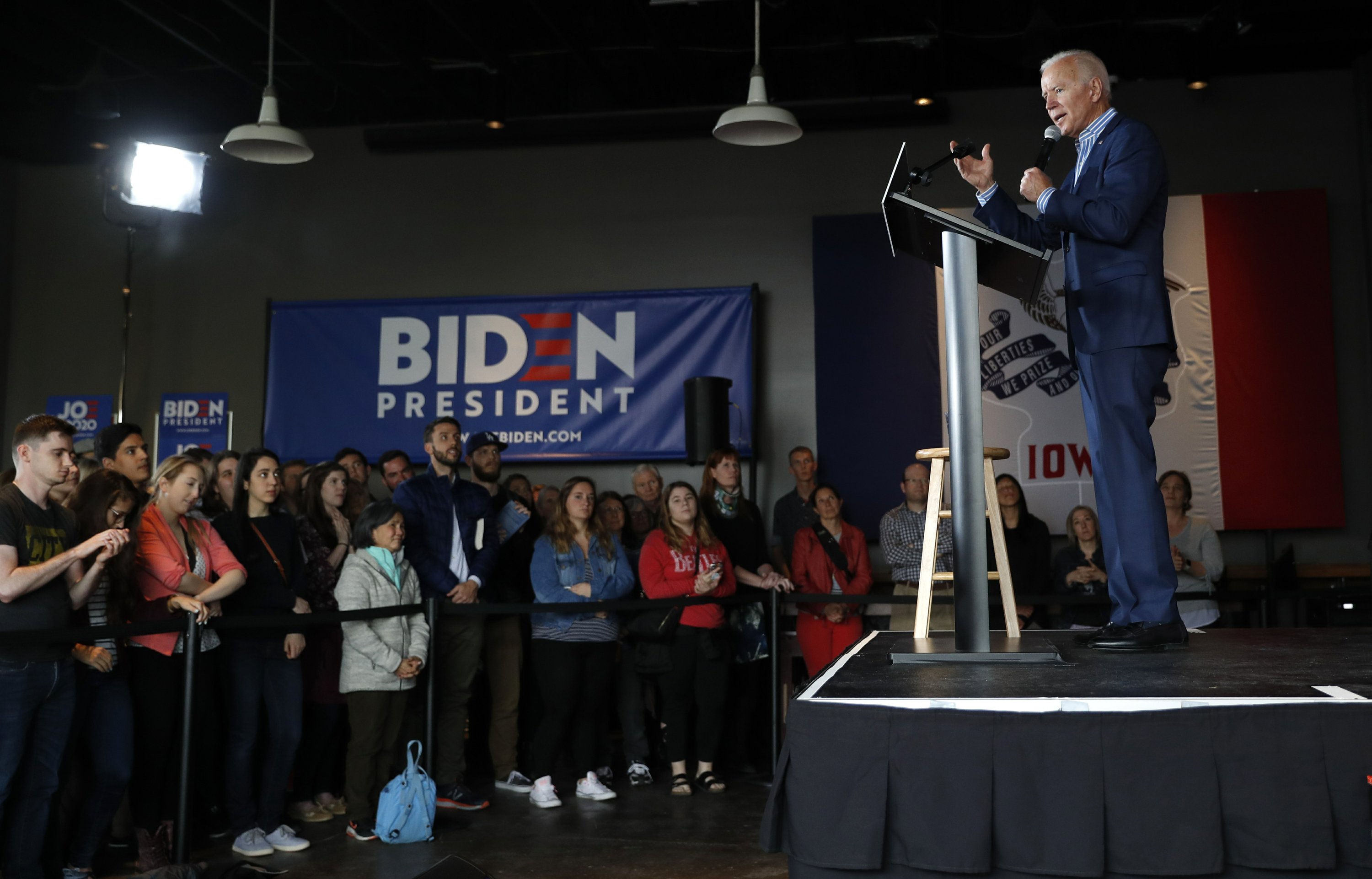 WASHINGTON — President Donald Trump may want to cast his potential Democratic rivals as a band of angry socialists, but Joe Biden is not cooperating with Trump’s reelection strategy, and that’s giving the president growing unease.

As the Democratic field expands to more than 20 contenders, Trump and his campaign team have been trying to lump them all together as left-wing radicals. Campaign officials believe it’s the best way for Trump to overcome his challenges with moderate voters, particularly in the upper Midwestern states critical to his reelection.

But Biden’s working-class appeal and more pragmatic policy approach are putting the GOP framing of the 2020 race to the test. As he campaigned in Iowa this week, Biden showcased his union support and steered clear of the liberal policy debates firing up the Democratic base.

From the White House, Trump watched — and tweeted — with some concern, according to two people familiar with the president’s thinking, as Biden earned the endorsement of a prominent International Association of Fire Fighters and secured a spot at the top of Democratic polls. The firefighters’ backing, in particular, appeared to irk the president, who relishes the support of first responders. It was the sort of endorsement that threatened to provide Biden with credibility with the centrist voters Trump must hold onto, said the two people, who spoke on condition of anonymity because they weren’t authorized to reveal the president’s thinking on the matter.

Trump blasted out more than 50 tweets and retweets about Biden before 7 a.m. Wednesday — a frenetic pace, even for the prolific social media user. Trump followed up by calling him “Sleepy Joe” in an interview with Boston Herald Radio on Wednesday, adding of Democrats, “They’re all pretty heavy leaning left, including him.”

Biden had said earlier Wednesday of Trump: “I’ve had his attention for a while.”

Biden’s swift rise tests the Trump campaign’s theory that no candidate can win the Democratic nomination without first embracing a slew of progressive policies that would appeal to the party’s base in the primaries but put Trump in a stronger position once he has a general-election opponent he can pillory as outside the American mainstream.

“The great challenge for every campaign is to define your opponent,” but Democrats are doing that work for Trump, said Republican strategist Josh Holmes. “The things that Bernie Sanders talked about in 2016 have been adopted by virtually every Democratic candidate for president. They’re the admission for entry to being competitive in this race.”

While Biden has begun laying out positions that tack with the direction of his party on health care, education and taxes, for example, he has taken care to avoid embracing the more drastic proposals backed by the Vermont senator and others on issues including “Medicare for All” and the Green New Deal.

Republicans, for their part, are hard at work trying to erode that image.

“Joe Biden is no moderate, just ask him,” tweeted Republican National Committee Chairwoman Ronna McDaniel. “Biden proudly claims he ‘was never labeled as a moderate’ in Delaware. And in a sea of 2020 socialists, Biden says he’s ‘the most progressive’ person running. Don’t be fooled: Biden and his policies are too liberal for most Americans.”

The GOP’s efforts to paint all Democrats as one and the same kicked into high gear last week after Sanders said in a CNN town hall that everyone, including convicted terrorists like the Boston Marathon bomber, deserved the right to vote. Republicans pounced on what they viewed as a new “liberal litmus test,” immediately redistributed Sanders’ comments across social media platforms and in reporters’ inboxes, and called for other Democratic candidates to stake out a position on the issue.

It was a tactic Republicans deployed before on the Green New Deal, Medicare for All and other hot-button issues that have been championed by the Democratic Party’s resurgent progressive wing. Their aim is to try to force the Democratic contenders to choose between appeasing their party’s base for the primary and preserving their chance at winning over less-liberal voters in the general election.

Trump allies have tried to force the same approach with Biden.

White House counselor Kellyanne Conway asked reporters Tuesday to press him on his health care stance, trying to frame the issue as a choice between breaking with other progressive Democrats and repudiating the signature legislative achievement of former President Barack Obama, under whom Biden served two terms as vice president.

“Is he for a Medicare for All? Because Medicare for All means that Obamacare didn’t work,” Conway goaded. A day earlier, as Biden launched his campaign, he embraced a Medicare buy-in option, but stopped well short of backing the proposal pushed by Sanders and picked up by several other Democrats.

Biden’s education position and rhetoric are well short of that laid out by another 2020 presidential candidate, Massachusetts Sen. Elizabeth Warren, who is championing debt-free college, and Sanders, who supports government-paid undergraduate tuition. Biden has been promoting an “affordable” goal, guaranteed paid two-year community college for those who qualify. The effect would be, he said in Dubuque, Iowa, on Tuesday, “cutting in half the cost of a four-year college because your state universities accept transfers of the credit.”

The Trump campaign is papering over such distinctions.

But Biden poses the clearest test of that perspective. He is a known quantity in American politics after decades in public life, and he has demonstrated appeal to the working-class voters in Rust Belt states whom Trump’s team believes it can turn against Democrats.

“To paint him as one of many socialists is just a way to not have a conversation about decency and experience,” said Liz Allen, a former Obama-Biden official. “Joe Biden has the two things that Donald Trump doesn’t have that voters care about.”