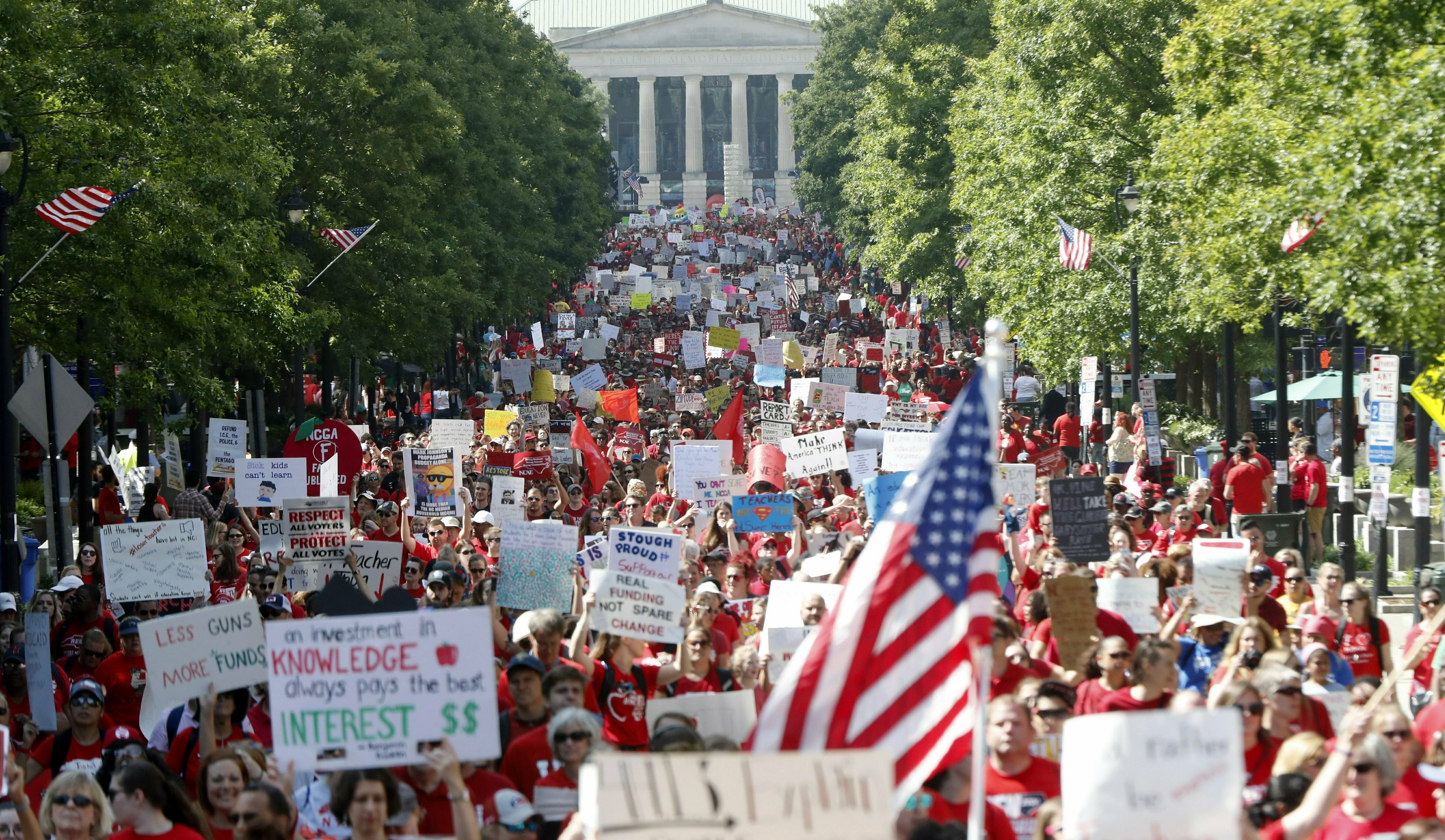 RALEIGH, N.C. — North Carolina teachers took to the streets Wednesday for the second year in a row with hopes that a more politically balanced legislature will be more willing to meet their demands.

When an estimated 20,000 people marched for teachers last year, Republicans held a veto-proof majority in the state House and Senate. The results of November’s election changed that, and now Cooper’s vetoes can stand if Democrats remain united.

The House budget released Tuesday includes some of the teachers’ demands: higher pay for veteran teachers and restoration of a salary bump for teachers with masters’ degrees.

Teachers in neighboring South Carolina also rallied Wednesday and Oregon teachers plan to gather next week as walkouts that began in West Virginia last spring continue across the country, with many proving successful.

In Raleigh, teachers were going to meeting spots Wednesday morning ahead of the march and rally. One group of teachers donning red shirts with the North Carolina state outline walked to the state legislative building Wednesday morning. Among them was a seventh-grade student, Aaron Painter.

Painter said he’s participating because he wants to see more mental health services in his school, which he said has one full-time counselor.

“I know mental health is low in our school. We need more help because there are kids that are thinking about suicide and they’re only in seventh grade,” Painter said.

He knows a few of them personally.

Painter marched alongside his mother, Tonya Painter, a third-grade teacher at McGee’s Crossroads Elementary school in Johnston County. She said she has been teaching for 18 years, and every year, her students take more tests.

“These students are 8 years old and they’re taking BOGs, COGATs, MCLASS testing, MAP testing, NCCHECK tests, and EOGs,” she said, rattling off a list of acronyms for various statewide tests. “That’s a large amount of tests.”

While lots of funding goes toward these tests, Tonya Painter doesn’t believe that enough funding goes toward holistic teaching and services for the students. She said she wants her students to be prepared for more than just tests. Like her son, one of her biggest concerns is mental health, especially given the uptick in school shootings over the past two decades.

“Every mind matters,” she said. “I feel like the school shootings all started years before, with probably bullying or anxiety and depression — things that students are dealing with that they need help working through.”

The South Carolina Department of Public safety tweeted that about 10,000 people attended the rally in Columbia, where people gathered at the Statehouse in Columbia.

Sophomore Kyle Brantley of Blythewood High School told the crowd that improving public schools is “not a Republican or Democratic issue. It’s a statewide issue.”

“Educators have the right to be compensated fairly for teaching students like me,” he said.

The nearly $24 billion spending package includes money to raise teacher pay on average by 4.8%, with the most veteran educators and principals getting much more. A 10% salary supplement for teachers with master’s degrees, phased out earlier this decade, would be restored.

It doesn’t include several demands by the North Carolina Association of Educators, including a $15-per-hour minimum wage for local school custodians and other workers and expansion of Medicaid to hundreds of thousands of people.

Republican legislators say the NCAE and its allies are ignoring strong gains in education spending, teacher pay and graduation rates since they took over the General Assembly eight years ago. Average teacher pay has improved from 47th in the country in the 2013 to an estimated 29th this year, according to the National Education Association.

Republican Senate leader Phil Berger has been particularly critical of Wednesday’s events, calling the NCAE a left-wing group that organized a one-day paid “strike” designed to help Cooper and other Democrats. More than 30 school districts canceled classes because so many teachers asked for the day off.

Middle school special education teacher Lizzie Hourigan teaches at Noble Middle School in New Hanover County and said it’s “a constant struggle” to make ends meet. She taught for 10 years in New York and Connecticut before moving down to North Carolina in 2013 to teach, and she said she noticed a big difference in the level of pay and support she received as a teacher in North Carolina.

She invited those who have been critical of the rally to come into her classroom or other classrooms in her school, where she said overcrowding is another issue.

“See what we work with every day,” Hourigan said. “In New Hanover, they’re building more and more housing but there aren’t the schools to support the kids moving in.”