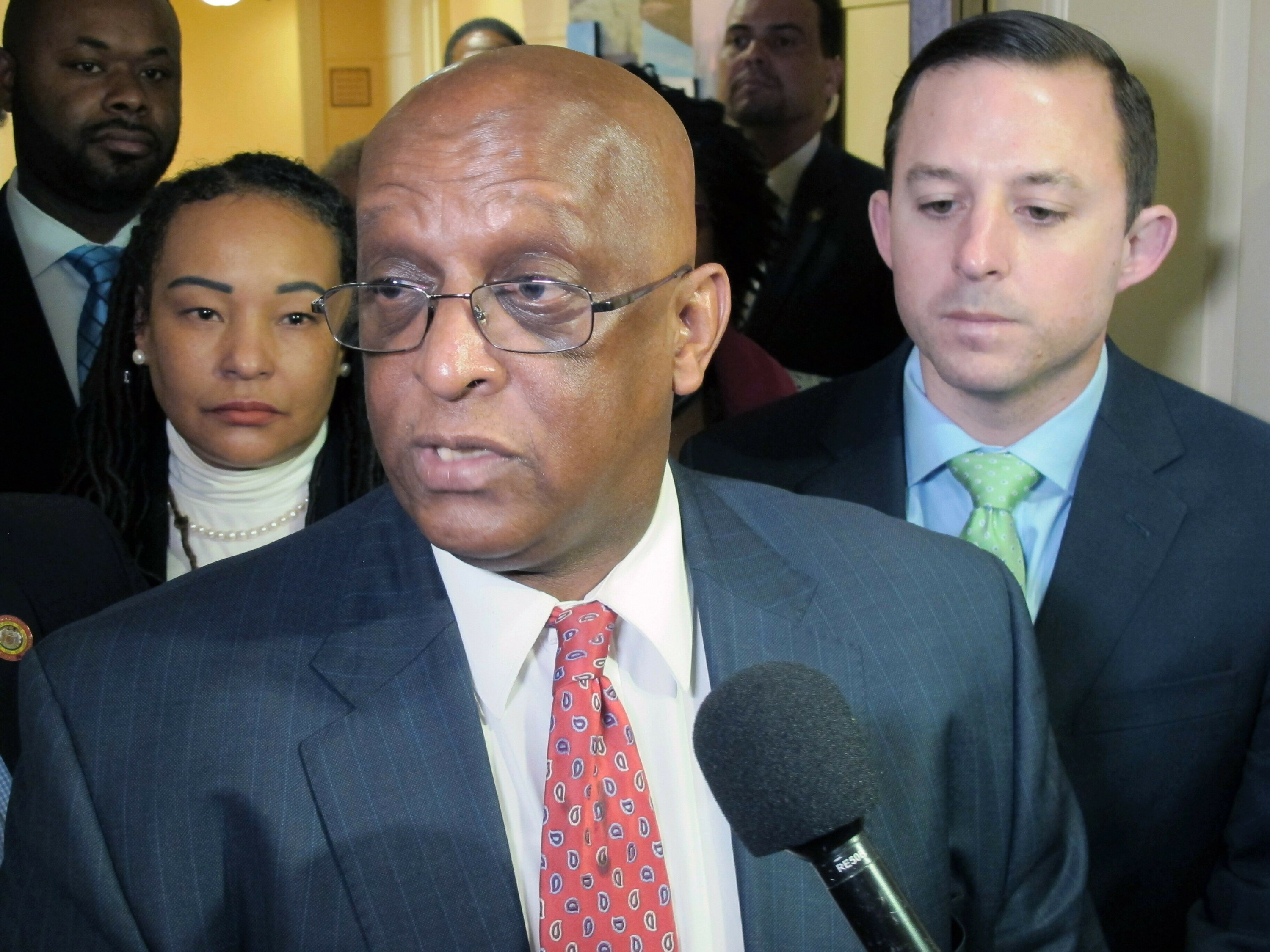 BALTIMORE — After ex-Mayor Catherine Pugh’s rapid collapse amid multiple public corruption investigations, Baltimore city employees are pulling down her official portraits as the city quickly shifts into a new era with Mayor Bernard “Jack” Young at the helm.

Young, a fellow Democrat and a longtime leader of the City Council, automatically replaced Pugh after her resignation Thursday afternoon.

In a phone interview, Young told The Associated Press he’s ready to make changes, and is focused on reducing eye-popping rates of violent crime and tidying up the city’s streets. He aims to bring more investments and jobs, particularly to its most deeply disenfranchised neighborhoods.

Young had been Baltimore’s acting leader for a month already, ever since Pugh departed on indefinite leave, saying she was physically ill and emotionally overwhelmed amid the scandal involving her self-published children’s books.

“I’m determined to make a dent. I’m not a placeholder — I’m the mayor now. And I’m going to run the city like the mayor,” Young said from Detroit, where’s he’s attending a conference about economic development before his return to Baltimore over the weekend.

There’s little expectation that Young’s new administration can overcome Baltimore’s chronic problems of poverty, violence and inequity as he fills out the remainder of Pugh’s term. But he does have numerous political allies in Baltimore and the state’s capital and there’s hope he can make some advances.

Pugh’s career-ending debacle is one of the weirder political scandals in recent memory. It’s focused on “Healthy Holly” — a lucrative and obscure children’s book series she self-published focusing on a fictitious African-American child with a laser-like focus on exercise and good nutrition. The slim illustrated books, sharing tips on nutrition and exercise, were meant to be distributed to schools and daycares. But copies are hard to find.

“She no longer has any official capacity with the city,” Andre Davis, Baltimore’s solicitor, told reporters before choking up a bit at his former boss’s humiliating resignation from the one political post she always described as her dream job.

It’s a stunning fall from grace for the 69-year-old Pugh, who rose through the Democratic ranks over many years to become the city’s most powerful figure. But with federal, state and city investigators trying to unravel years’ worth of tangled arrangements selling at least $800,000 worth of her self-published children’s books, Pugh finally decided that she didn’t want to keep the job badly enough to remain in office amid questions focused on her murky financial dealings.

“Baltimore deserves a mayor who can move our great city forward,” Pugh said in a written statement read by her lawyer, Steven Silverman. After a month of sequestering herself at home, it wasn’t immediately clear whether some kind of deal was struck with federal investigators to pave the way for her resignation.

In late March, during a brief stint back at City Hall after being diagnosed with pneumonia, Pugh described her no-contract $500,000 arrangement to sell “Healthy Holly” books to a university-based health care system as a “regrettable mistake” and offered apologies. A few days later, she announced her indefinite leave of absence hours after the state’s governor requested a public corruption probe into Pugh.

Other customers included a Maryland financier who divulged that his financial firm decided to write a $100,000 check for “Health Holly” books after she clinched the 2016 Democratic primary. He insisted he expected nothing in return. She also sold tens of thousands of books to customers including a $4 billion hospital network she once helped oversee and health carriers with business before the city.

Pugh’s resignation came exactly a week after her City Hall offices, homes and multiple other locations were raided by FBI and IRS agents and it became clear that a federal grand jury has been empaneled. She is the second mayor in less than a decade to step down because of scandal. She came to office contrasting her clean image with her main opponent, ex-mayor Sheila Dixon, who was forced to depart office in 2010 as part of a plea deal for misappropriating about $500 in gift cards meant for needy families.

Since the book scandal erupted in late March, Pugh’s fractured administration has lurched from one crisis to another and various aides have been fired or left City Hall. Young declined to say if more Pugh-era employees would soon be fired for any reason.

Pugh’s resignation provides a measure of resolution after weeks of uncertainty and mounting pressure for her to step down. Maryland’s Republican governor and numerous Democrats had pressed for her resignation, saying she was no longer fit to lead Baltimore.

“This was the right decision, as it was clear the mayor could no longer lead effectively,” Gov. Larry Hogan said in a statement.