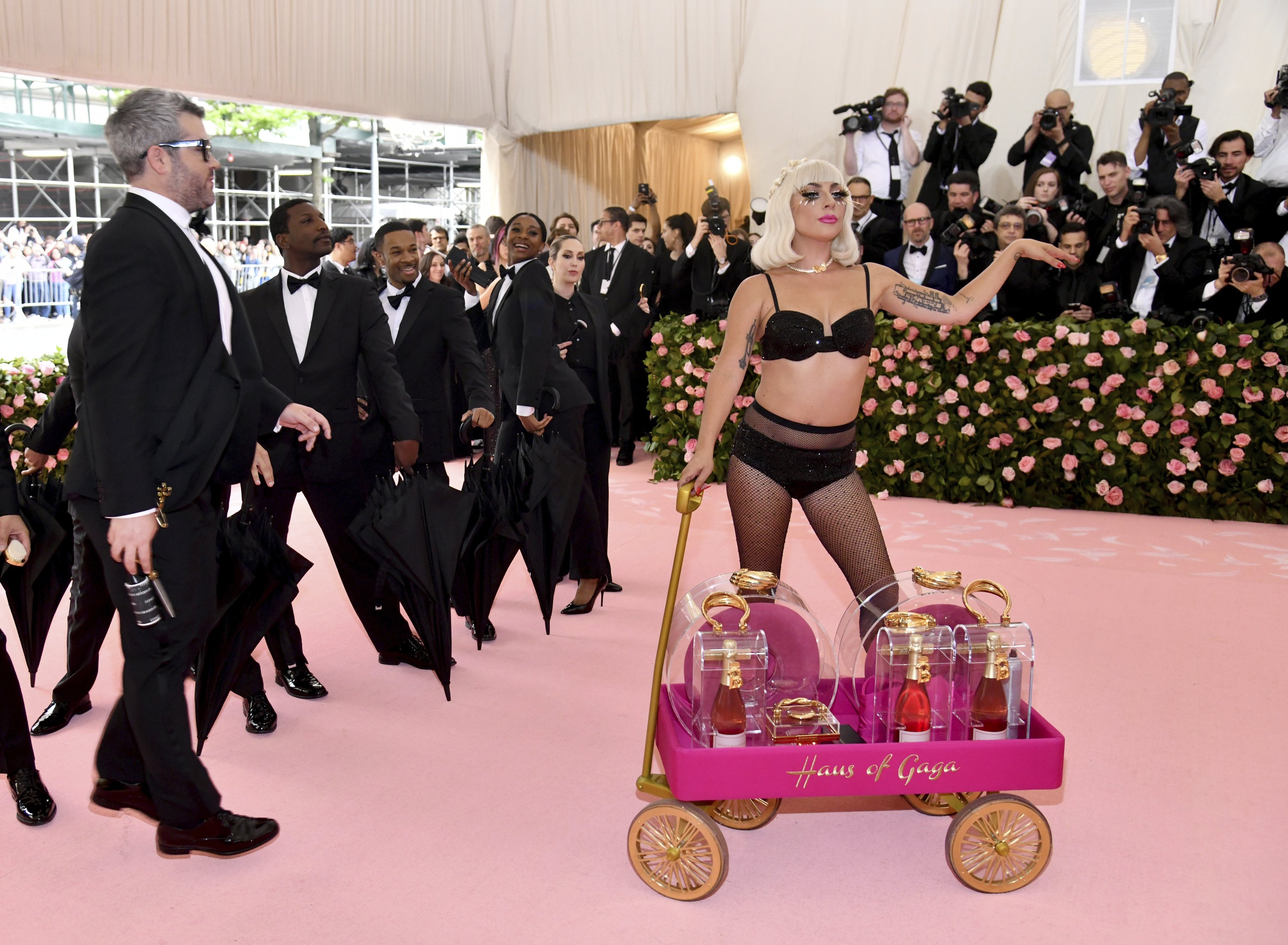 NEW YORK — The Met Gala kicked off Monday at its campiest best, with Lady Gaga working the pink carpet to its fullest in long golden eyelashes and a huge fuchsia dress, peeling off layer after layer until she was down to a bra, panties and fishnet stockings.

Billy Porter went Egyptian-esque sun god in gold wings and a chain head piece by the design duo the Blonds, carried onto the carpet by shirtless men in gold pants as he lay on top of a black throne.

“Camp is the art of being extra and I’ve always been extra,” he laughed. “I’m from the theater so it’s easy for me.”

Brandon Maxwell, who created Gaga’s reveal, helped her navigate the stairs at the Metropolitan Museum of Art as she posed with several helpers. Maxwell undressed her further, revealing a black strapless asymmetrical ballgown underneath with a huge side bustle. Then she undressed again to show off a pink dress reminiscent of Marilyn Monroe in “Gentlemen Prefer Blondes,” walking up and down the carpet.

But she wasn’t done. Moments later, she undressed again to pose in a glittering bra and panties set, with huge platform shoes. Gaga is a hard act to follow but Serena Williams, one of her co-hosts, did her best in a neon yellow flowing gown adorned with leaves, Nike sneakers on her feet.

This year’s gala theme, “Camp: Notes on Fashion,” was inspired by a seminal 1964 essay by Susan Sontag in which she describes the phenomenon as something that shan’t be talked about: “To talk about Camp is therefore to betray it.”

The theme is the basis for the Costume Institute’s spring exhibition.

Karlie Kloss showed off her signature long legs in a gold miniskirt and singer Anderson .Paak wore Gucci. Tiffany Haddish, in a black and silver pantsuit, a glitzy hat on her head, handed out fried chicken to the media she pulled from her bag.

“I bring my own snacks because last year I was starving and I learned my lesson,” she said. Of the theme, she declared: “Camping means no panties!”

Ava DuVernay, who wore a green dress with a huge pink flower on the skirt, wasn’t at all sure about camp before she was filled in.

“I thought it was camping and I was afraid,” she said.

Lena Dunham, meanwhile, wore a pink minidress emblazoned with “rubberist.” Harry Styles arrived in a black jumpsuit with see-through sleeves, one earring, black nails and heeled booties. Jared Leto carried a version of himself — a fake head — in his arms as he walked in a red mandress embellished with loops of silver jewels.

Awkwafina breezed through in trophy gold, accompanied by designer Joseph Altuzarra, while others in garish greens, animal prints and metallics soaked up the theme. Some played it safe in more traditional carpet looks.

Anna Wintour, who masterminds the gala every year, wore a light pink cape with loose ostrich feathers over a matching gown adorned in a flower sequin design. She smiled and waved without her usual sunglasses on her face and told waiting reporters this year’s theme is anything goes.

“I hope they have a lot of fun,” she said of her A-list guests. “The more crazy the better.”

The worlds of fashion, film, music and sports converge at the massive gala every year, a fundraiser for the museum’s Costume Institute. About 600 people were expected to make it up the museum’s grand staircase.

Porter and Gaga weren’t the only ones to have big fun with camp. Celine Dion, who wore a backward tuxedo to the Oscars one year, on Monday night was in a pale gold dress with fringe embellishment and a queenly feather headpiece.

As for Porter, who was a hit at the Oscars in a tuxedo ballgown, said his gala moment was inspired by back-in-the-day Diana Ross, Elizabeth Taylor and “everything else.” It took him five hours to get ready.