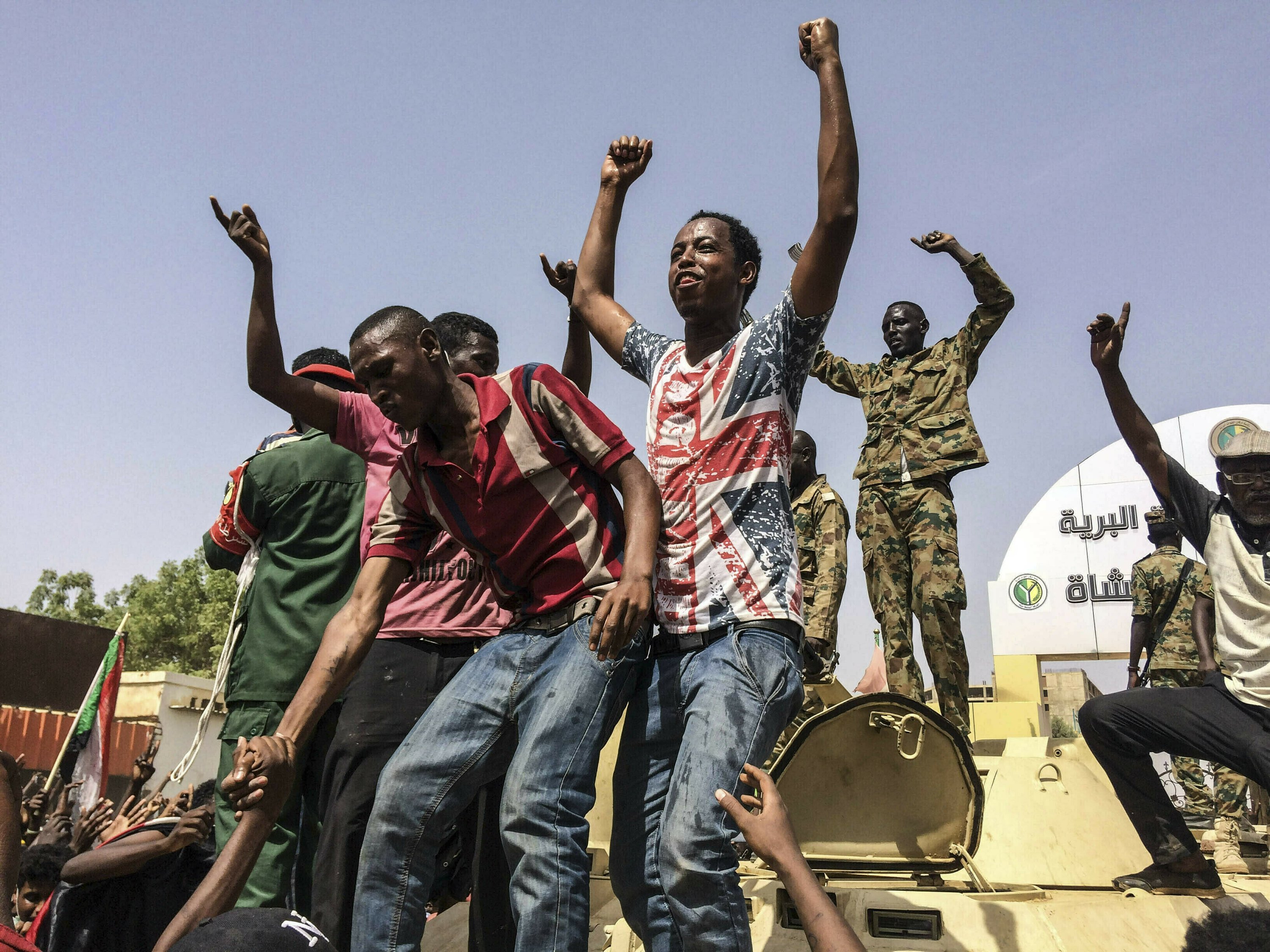 CAIRO — As the popular uprising against Sudanese President Omar al-Bashir gained strength earlier this year, Egypt, the United Arab Emirates and Saudi Arabia began reaching out to the military through secret channels to encourage his removal from power, according to Egyptian and Sudanese officials.

The three Arab states are ruled by autocrats who have clamped down on calls for democratic change in their own countries. But they had long viewed al-Bashir as a problem because of his close ties to Islamists, and had grown weary of his shifting loyalties and outreach to their rivals, Turkey and Qatar.

In the chaotic weeks leading up to the April 11 military overthrow of al-Bashir, they found themselves on the same side as the pro-democracy protesters massed outside the military headquarters in the capital, Khartoum. But with the military and the protesters now locked in tense talks over the path forward, they likely see the generals as allies who can restore stability and keep the Islamists out of power.

Four Egyptian security officials described their government’s quiet outreach and support for Gen. Abdel-Fattah Burhan, a rare non-Islamist among Sudan’s top brass who now leads the ruling military council. The officials were involved in arranging the talks and in some cases were present at them. They spoke on condition of anonymity because of the secretive nature of the outreach.

Spokesmen for Egypt’s Foreign Ministry and the transitional military council now ruling Sudan did not respond to repeated requests for comment.

Since the military coup, Egypt has successfully pressed the African Union not to suspend Sudan. The UAE and Saudi Arabia have provided $3 billion in aid to shore up the military council, and the UAE has hosted Sudanese opposition and rebel groups for talks with the military on joining a transitional government.

The three countries’ main concern is sidelining the Islamists who orchestrated al-Bashir’s 1989 military coup and populated the upper echelons of his regime.

Egypt has waged an unprecedented crackdown on the Muslim Brotherhood group since the 2013 military overthrow of Mohammed Morsi, an Islamist who became the country’s first freely elected president after the Arab Spring uprising in 2011 but whose rule ignited mass protests.

Saudi Arabia and the United Arab Emirates view the Brotherhood and its regional affiliates and offshoots as a threat to their monarchical rule and as proxies of Turkey and Qatar. The Saudis and Emiratis strongly supported Morsi’s overthrow, and along with Egypt they now consider the Brotherhood a terrorist group.

“Egypt’s main concern is the Islamists,” said Attia Essawi, an Egyptian expert on African affairs at Cairo’s al-Ahram Center for Political and Strategic Studies. The protesters were “sick and tired of Islamic rule, and this was in Egypt’s interests.”

Sudan’s protests began in December in response to price hikes and shortages, but quickly escalated into calls for an end to al-Bashir’s 30-year reign.

Egypt initially supported al-Bashir, with President Abdel-Fattah el-Sissi welcoming him to Cairo in January. Egyptian police prevented demonstrations by the country’s large Sudanese community and detained a number of Sudanese activists, whom it handed over to Khartoum, according to international rightsgroups.

The Gulf countries also remained largely neutral at first, fearing another Arab Spring uprising like those that convulsed the region and threatened their own stability in 2011. But they offered little if any aid to al-Bashir as he struggled to contain the economic crisis fueling the demonstrations.

The Egyptian officials say that all changed in late February, when the protesters defied an emergency declaration and ban on unauthorized gatherings. The three countries realized at that point that “al-Bashir’s days in power might be numbered,” one official said.

By early April, the officials said, it became clear that al-Bashir had failed to crush the uprising. On April 2, Algeria’s long-ruling President Abdelaziz Bouteflika stepped down in the face of similar protests, injecting a fresh burst of momentum into Sudan’s demonstrations. On April 6, the protesters set up a sit-in outside the military headquarters.

An official who attended the meeting said the Sudanese inquired as to how Egypt would respond if the military removed al-Bashir, and whether the Saudis and the Emiratis would provide financial aid.

“They wanted to be reassured,” the official said.

The officials said the three Arab countries then reached out to Burhan and to Gen. Mohammed Hamdan Dagalo, better known as “Hemedti,” the commander of Sudan’s Rapid Support Forces. Both had helped coordinate the deployment of Sudanese troops to Yemen as part of the Saudi-led coalition battling the Iran-aligned Houthi rebels. The UAE is a leading member of the coalition.

Both the army and the Rapid Support Forces had refused orders from al-Bashir to violently disperse the sit-in outside the military headquarters, and the two generals had each met with the protesters to discuss their demands.

Dagalo would later tell local media that when he met with al-Bashir in early April, the 75-year-old president cited an Islamic legal ruling that says a ruler can kill up to a third of his people. “I said, ‘God forbid,’” Dagalo said. “That was our last interaction.”

Tensions rose in the following days as security forces close to al-Bashir attacked the sit-in and soldiers intervened to protect the protesters. Two soldiers were killed.

The generals “feared divisions inside the armed forces as low-ranking officers sided with the protesters,” an Egyptian official said. “We advised them to try to find a safe exit for al-Bashir.”

Egypt proposed that al-Bashir resign and leave for Saudi Arabia, the official said. A senior Sudanese official in al-Bashir’s government confirmed the offer, which he said was presented to the defense minister, Gen. Awad ibn Ouf, and Ahmed Harun, the acting head of the ruling National Congress Party, on April 9.

On the following morning, the military changed out al-Bashir’s presidential guard and cut his phone lines, signaling that a coup was underway. Al-Bashir “was shocked and kept yelling,” according to a Sudanese military official. The Sudanese officials spoke on condition of anonymity because they were not authorized to speak to reporters.

Burhan and two other generals met with al-Bashir shortly before the public announcement of the coup. They told him he would not be extradited to the International Criminal Court to face charges of genocide and war crimes during the Darfur conflict in the early 2000s, and that he could remain in the presidential residence under house arrest, the military official said.

On April 11, the military announced the end of al-Bashir’s 30-year rule.

But the protesters have remained in the streets, fearing that the military intends to keep much of al-Bashir’s regime intact. Ibn Ouf, who announced al-Bashir’s overthrow, stepped down as head of the transitional military council a day later, to be replaced by Burhan. His deputy, military chief of staff Kamal Abdel-Marouf al-Mahi, also resigned.

Three other members of the council, including el-Sheikh, who had led the delegation to Cairo, resigned in late April after the protesters refused to meet with them. All five were seen as Islamist allies of al-Bashir.

Days after the coup, the military apparently broke its promise to al-Bashir, dispatching him to a Khartoum prison where his opponents were once jailed and tortured. A number of other top officials have also been arrested.

But the protesters say their revolution is far from over, and have vowed to remain camped out in front of the military headquarters until power is handed over to a civilian administration. On Thursday, they led a massive march through Khartoum.

Ahmed Rabie, one of the protest organizers, said the rally was “a message to the military council, as well as regional and international players, that the Sudanese people will not give up on their demand for a civilian government.”