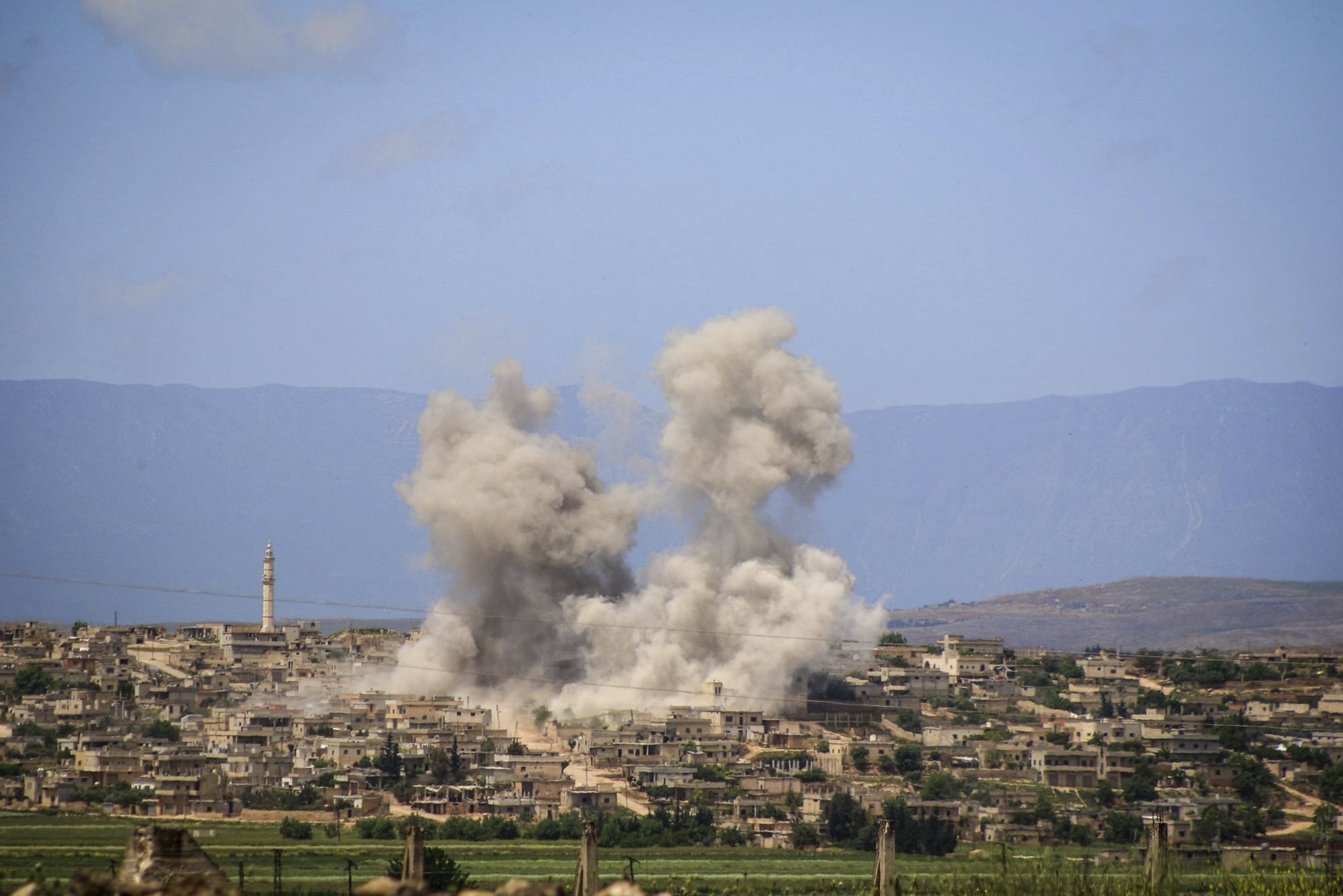 BEIRUT — After eight months of relative calm, Syria’s northwestern province of Idlib is once again a theater for bloody military operations: heavy bombardment, airstrikes and waves of civilian displacement as Syrian government troops, backed by Russia, push their way into the rebel-held enclave in a widening offensive.

The violence of the past week threatens to completely unravel a crumbling cease-fire agreement reached between Turkey and Russia at the Black Sea resort of Sochi in September last year, which averted a potentially devastating assault by the Syrian government to retake the province.

“There are no good options when it comes to Idlib,” an analysis by the Brussels-based International Crisis Group concluded in March, explaining why the province has oscillated between stagnation and bursts of bloodshed for years.

The area is among the last in the war-shattered country outside President Bashar Assad’s control — and the last area still held by rebels. Confident in the support from Russia, Assad has pledged to recover the province and every other inch of Syrian territory lost during the war.

Here’s a look at the rebellious region, and the fighting taking place:

WHY IS IDLIB IMPORTANT?

For Assad, Idlib stands in the way of final victory against the armed opposition. After eight years of war, he has largely quashed the popular revolt that erupted against his family’s decades-long rule in 2011, which was inspired by the Arab Spring protests that swept the region that year.

On the Syria conflict map, Idlib province in the country’s northwestern corner bordering Turkey forms a green-colored, rebel-controlled region surrounded by a sea of red, code for Syrian government control. Recapturing it would constitute a definitive defeat for opposition forces that once controlled half the country and threatened Assad’s seat of power in Damascus.

Russia and Iran, key international allies of Assad, want him to complete the victory. But while recapturing Idlib or even just regaining control of key highways around it has major economic benefits, a protracted, bloody battle will be costly in terms of soldiers’ lives, rekindling criticism over deaths just as his government may be starting to come in from the cold.

And the area is not just important for Assad. Idlib sits across the border from Turkey, which has long extended political and logistical support to the rebels fighting to topple Assad. Turkey also maintains about a dozen military observation posts around Idlib and has carried out patrols around the area.

Turkey, which already hosts 3 million Syrian refugees, fears a spillover of refugees across the border into its territories in case of an all-out assault.

WHY IS THERE FIGHTING AGAIN NOW?

The truce reached in September by Turkey and Russia has been fraying, with violations taking place on an almost daily basis in recent weeks. Parts of the agreement have yet to be implemented, including the withdrawal of al-Qaida-linked militants from the front lines, which Turkey was supposed to facilitate.

Two major highways that cut through rebel-held areas were also supposed to be reopened before the end of 2018 but remain closed.

A large government military buildup and advances on key villages in nearby areas suggests an assault is already underway.

But the current government offensive is likely to be limited in scope for now, aimed at regaining government control over the strategic M4 and M5 highways to open the way between the Mediterranean city of Latakia, a government stronghold which houses a huge Russian air base, Hama further to the north and the city of Aleppo.

Fighting currently is concentrated in towns and villages in northern Hama and parts of southern Idlib, where the government has captured a number of villages, including a village known for its medieval fortress, Qalaat al-Madiq on Thursday.

Russia and the Syrian army say they are responding to stepped-up attacks by al-Qaida linked militants on government-held areas. One such attack in April in Aleppo province killed 22 soldiers and pro-government gunmen. The rebels say Russia and the government are using military pressure after failed negotiations to secure access to the highway and protect the coastal area, where Russia has its air and naval base.

Idlib is the opposition’s last refuge. Its prewar population of 1.5 million has swelled to around 3 million after it was designated a “de-escalation zone” under an agreement between Turkey, Russia and Iran in May 2017. Tens of thousands of Syrians trapped in other parts of the country were evacuated there under various cease-fire agreements.

Now they have nowhere left to turn, after other opposition pockets have collapsed, and Turkey is building a wall along its borders, sealing them to new refugees.

It is estimated that there are tens of thousands of rebel fighters and jihadis in Idlib, the most dominant of these groups being Hayat Tahrir al-Sham — the latest iteration of al-Qaida’s former affiliate known as Jabhat al-Nusra. Other factions have coalesced under the umbrella of the National Front for Liberation, and include Islamists, army defectors and some of the early armed opposition formations. Earlier this year, Hayat Tahrir al-Sham seized control of most of the enclave after clashing with other rebel groups.

In 2017, the U.S. envoy to the coalition fighting the Islamic State, Brett McGurk, described Idlib as “the largest al-Qaida safe haven since 9/11.”

THE BLOODIEST CHAPTER YET?

A full-blown military offensive to recapture Idlib is expected to bring some of the most brutal and bloody fighting to date in Syria’s civil war, which has killed close to half a million people and displaced millions of others.

The mix of cornered, hard-core militants who will likely fight till the end with hundreds of thousands of trapped civilians is potentially disastrous, aid organizations warn.

“As bad as Idlib’s status quo is, all military solutions would be worse,” the International Crisis Group report said. “There is no obvious way to neutralize” Idlib’s jihadis without a terrible human toll.

According to the United Nations, airstrikes and shelling caused at least 80 civilian fatalities an over 300 injuries over a period of 10 days, starting April 28, while over 150,000 were displaced within the enclave to safer areas.

It also said shelling, airstrikes and active fighting in and around some 50 villages caused destruction of at least 10 schools. At least 12 health facilities were hit by airstrikes. The U.N. and aid workers warn that up to 800,000 people are in danger of renewed displacement.

With Turkey closing its borders to new refugees, it is unclear where civilians would go.