Anti-Kurdish protests in east Syria could endanger US plans 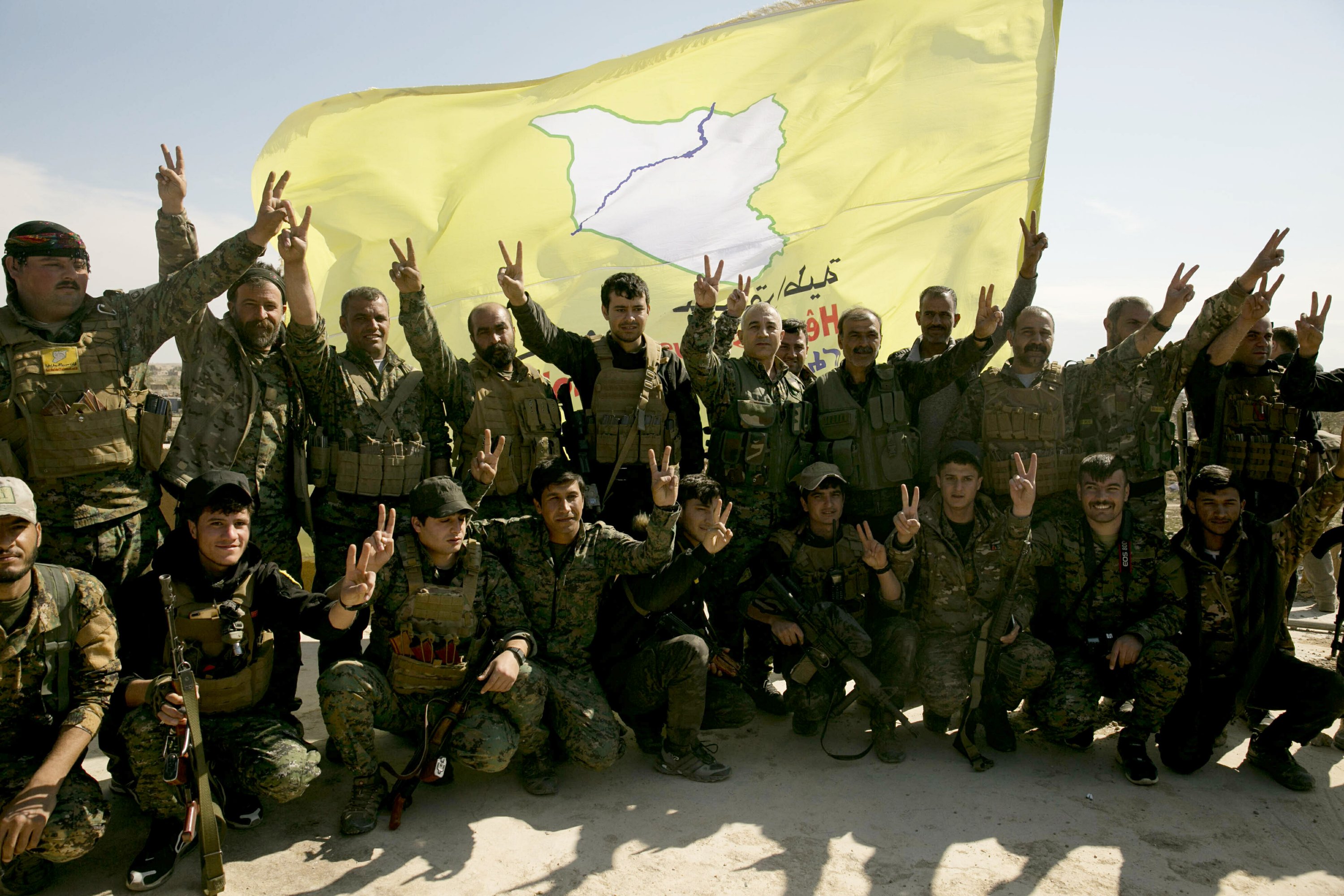 BEIRUT — The U.S.-backed Syrian Democratic Forces took credit for defeating the Islamic State group in its last stronghold in eastern Syria, celebrating the victory in front of throngs of journalists at a ceremony in March following a bloody four-year war.

But the Kurdish-led force now faces protests by local Arab tribesmen demanding better services, jobs and a bigger role in decision-making in the predominantly Arab, oil-rich and fertile region.

Demonstrations in more than a dozen villages in the eastern province of Deir el-Zour are limited for now, but they present a growing challenge to the U.S. and its local partners at a time when President Donald Trump plans to reduce America’s military presence in Syria.

An SDF official, who spoke on condition of anonymity because he was not authorized to speak to the media, said the protesters are a small percentage of Deir el-Zour residents. But the demonstration benefit the Syrian government, its Iranian backers and Turkey, and undermine “our victory against Daesh,” he said, using an Arabic acronym for IS.

Several rounds of talks between the SDF and local officials have so far failed to make progress, leading to concerns the protests could transform into an all-out uprising against the predominantly Kurdish force.

The protests come as the force, founded in 2015 to fight IS and armed by the U.S., faces multiple challenges.

IS sleeper cells have intensified their attacks in areas controlled by the SDF in recent weeks. Syrian President Bashar Assad’s troops, based along the west bank of the Euphrates River that cuts through Deir el-Zour, have vowed to reassert control over Kurdish-held areas in northern Syria. And Turkey, which considers the force to be a terrorist organization, has also set its sights on the region.

The SDF controls nearly a third of Syria, but unlike the provinces of Raqqa and Hassakeh in the north that have large Kurdish populations, Deir el-Zour in the east is almost purely Arab, leading to ethnic tensions between the local population and the Kurdish force.

Two years after entering the province in their push against IS, the SDF appears to have failed to win the hearts and minds of the residents in the region, which suffers from a lack of services, rising crime, fuel shortages and anger over what they see as growing Kurdish influence.

Although the SDF is a mixed force consisting of Kurds, Arabs and Christian fighters, its backbone is the Kurdish People’s Protection Units, or YPG.

Some SDF officials say that what’s happening in eastern Syria are not protests, but riots backed by Assad’s government with the aim of hurting the SDF and its American backers. SDF officials warn that if the protests continue, it will affect the search for IS sleeper cells in the region.

For nearly two weeks, residents in more than a dozen towns and villages in Deir el-Zour have been rallying, closing major roads with burning tires to prevent SDF tanker trucks from taking crude to Kurdish-held areas in the country’s north.

Areas liberated from the IS suffer fuel shortages and IS sleeper cells are launching a guerrilla campaign to avenge their defeat two months ago when the SDF captured the village of Baghouz, marking the end of the extremists’ self-declared caliphate.

Some of the protesters believe that Kurdish fighters sell oil to Assad’s loyalists amid severe fuel shortages in government-held parts of the country, aggravated by U.S. sanctions on Syria and its main backer, Iran.

Since SDF began capturing parts of Deir el-Zour in 2017, residents have expressed anger at what they say has been forced recruitment of Arab residents into the SDF, as well as the detention of many on suspicion of links to IS.

“People are fed up with the SDF,” said Omar Abu Laila, a Europe-based activist from Deir el-Zour who runs a group that monitors developments in the province. “They are robbing the wealth of the people in the region.”

The protests took a turn for the worse on April 24, when according to Deir el-Zour activists, the U.S.-led coalition and SDF fighters stormed a house in the village of Daman and killed six people, including two women and a child. They said the raid targeted a man called Farhan al-Sarhan, whom the SDF says is linked to IS, a charge that activists deny.

A day later, protests spread quickly to nearby villages and towns including Tayyaneh, Haseen, Mheimda, Husan, Shannan and Shheil.

“No to Kurdish occupation,” read one banner carried by protesters, according to images posted on social media.

“The pace of rehabilitation, economic development and provision of essential services has not been sufficient to meet the basic needs of the population,” Bassam Barabandi, a former Syrian diplomat now based in Washington, said of the protests. “As a result, people are feeling very hopeless about their current situation and the future. They do not see the regime as an acceptable alternative, and they are looking for the U.S. to act.”

Several meetings have been held over the past weeks between SDF officials and Arab dignitaries from Deir el-Zour to try to ease the tension without success, according to Barabandi and the Britain-based Syrian Observatory for Human Rights, a war monitoring group.

An Arab man from Deir el-Zour who took part in the talks, said that “the Kurds have been refusing to make any concessions.” He spoke on condition of anonymity out of concern for his safety.

He said the SDF is taking away most of the oil it pumps in Deir el-Zour — about 60,000 barrels a day — and leaves hardly anything behind.

Arab officials demanded, among other things, the release of SDF-held detainees, stopping the flow of oil from the province, giving Deir el-Zour fighters within the SDF a bigger role, ending compulsory conscription into the SDF and improving electricity and fuel services.

Rami Abdurrahman, who heads the Observatory, said chaos in eastern Syria is not a good omen for the SDF.

“The regime could be the biggest winner from what is happening,” he said.