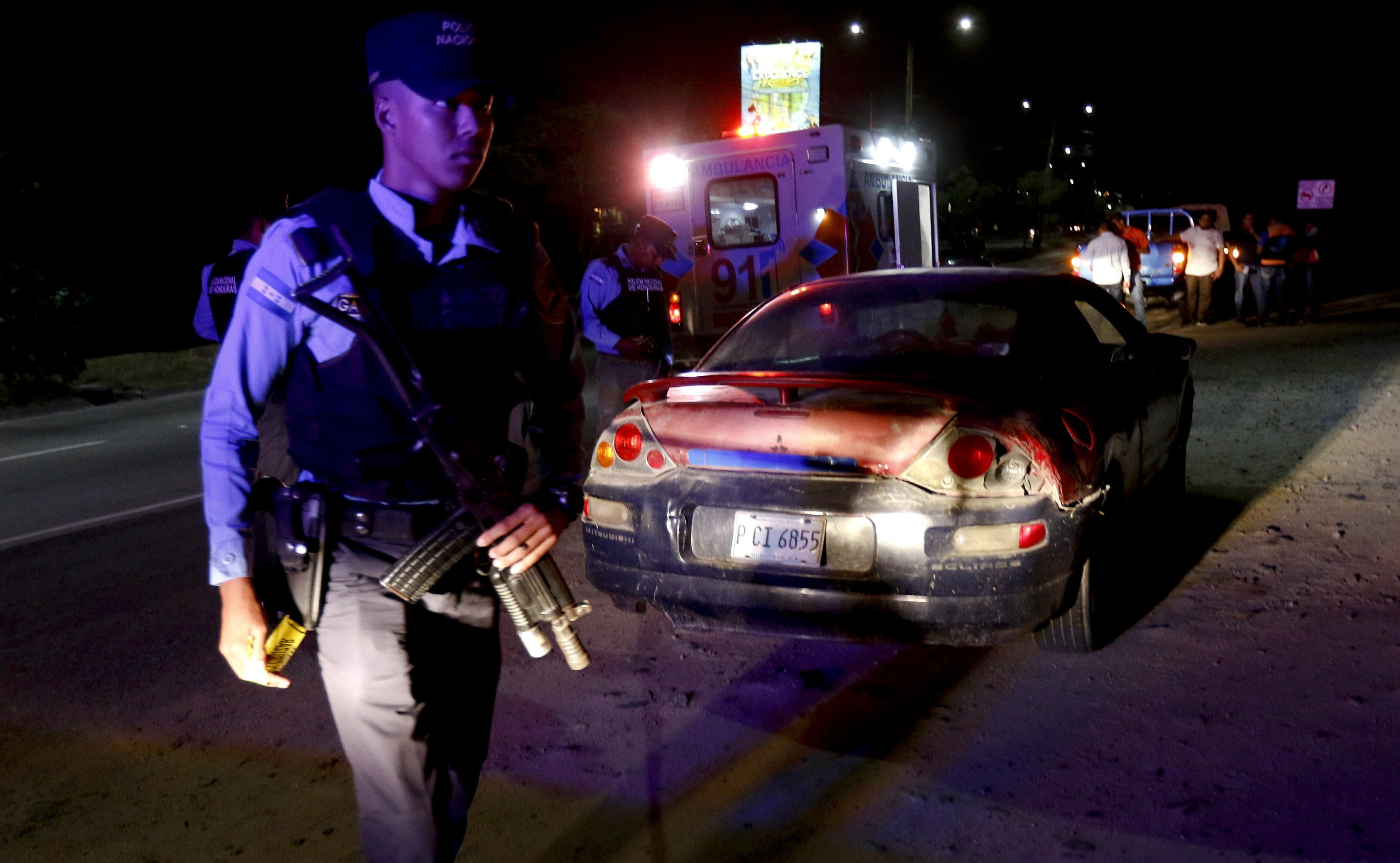 SAN PEDRO SULA, Honduras — In the dusty, dimly lit neighborhoods of San Pedro Sula, everyone knows the unwritten rules: There are places you don’t go without permission. If driving, roll down the windows so gang members and their lookouts can see who is inside. It’s safest to stay home after nightfall, leaving the streets to the enforcers and drug dealers who are armed and don’t hesitate to kill.

Honduras’ second biggest city is where caravan after caravan of migrants have formed in recent months to head north to Mexico and on toward the United States, fleeing violence, poverty, corruption and chaos. All of those are palpable on the city’s sweltering streets, a reminder of why thousands continue to flee despite the dangers and uncertain prospects for being able to stay even if they make it to the U.S.

The northern district of San Pedro Sula where Associated Press journalists accompanied police on a recent night is home to nearly 230,000 people with just 50 officers to patrol its 189 neighborhoods, including the most dangerous: Planeta, Lomas del Carmen and La Rivera Hernandez. Deputy police inspector Wilmer López says two drug labs were busted in the area in the last year. He has arrested gang members as young as 9.

Police officers carry handguns and are accompanied by soldiers with assault rifles. “They make us feel safer,” said López, who led the patrol.

He said nine separate gangs are known to operate in this part of town, including the internationally infamous 18th Street and Mara Salvatrucha, or MS-13. Both originated in Los Angeles decades ago and spread through deportations to Central America, evolving into hyper-violent transnational organizations that drive the high rates of killing and other crimes in Central America’s Northern Triangle countries — Honduras, El Salvador and Guatemala. Their calling cards are in the graffiti scrawled on homes, and in the bodies they leave behind.

“Some you can tell by their way of killing,” López said. “Like the Batos Locos gang, which bags (its victims), or 18th Street, which dismembers them.”

On this night the patrol largely goes without incident. Police frisk customers at a pool hall and check IDs over their inebriated protests. But around 6 a.m. the first body of the day, a youth with his face disfigured, is found dumped in the Sinai neighborhood just behind the Rivera Hernandez police station.

Residents of San Pedro Sula, the world’s most murderous city four years straight from 2011 to 2014, long ago grew numb to the bodies. Last week alone at least 16 people were killed in the city. According to local media, so far this year there have been at least 25 multiple homicides involving three or more victims.

At a lunch counter, news comes on TV about the latest slaying, of a man at a tire repair shop. Customers gaze curiously at the body on the screen but keep eating.

“People are not shocked when someone gets killed,” said Salvador Nasralla, a former opposition presidential candidate who laments that violence has become normalized in Honduras.

The National Civil Police say homicides have dropped significantly nationwide. From a high of 86 killings per 100,000 inhabitants in 2011, the homicide rate last year was 41 per 100,000 residents, though that is still one of the highest on the planet.

In San Pedro Sula some say violence has abated somewhat since about 800 gang members who ran extortion rackets from behind bars were moved from a prison in the city center to a maximum-security lockup in the western mountains in 2017.

Killings are said to be down even more so far this year, but bloodshed is not the only factor that makes life hard in the city.

“Violence is not determined solely by homicides but by the death threats, the extortions, the forced recruitments into gangs, attacks against property in the gang-controlled areas that the state has not been able to recover,” said Roberto Herrera Cáceres, the national human rights commissioner.

Erick Lara is a prime example. Along with six friends he joined the most recent caravan that left in April as a group of fewer than 300, much smaller than those seen before Mexican police raided a previous caravan and left its participants detained, deported or scattered.

Lara, a 27-year-old bricklayer, left San Pedro Sula even though he had a good job helping build a church because gangsters were trying to force him and his friends to join up.

“They are collecting young people to work for them” as lookouts or dealers, Lara said. “It’s not voluntary, and if you say, ‘No,’ they kill you.”

People from all over Honduran flock to San Pedro Sula whenever it is time for a new migrant caravan.

There is also a constant stream of the dead, as nearly all municipalities of the Cortes department send their bodies to the city’s morgue. Mourning relatives mill about outside.

“Here you always have people who died violent deaths,” said a funeral home worker. He declined to give his name for fear of reprisals.

Sitting on a wooden plank, a gray-haired, black-clad man who also asked not to be identified waited for the body of his slain son. He said the son was out drinking with friends when gunmen showed up and shot him, inflicting wounds that killed him days later in a hospital. The man said he had worried about his son, but had no idea who killed him or why. More than anything he seemed resigned to the new reality.

A car drove by and two policemen ran after it. Two gunshots rang out a couple of blocks away, perhaps fired into the air, and everyone turned to look. The officers came back laughing. Nobody asked what happened — nobody said anything.

Many Hondurans blame the country’s problems on President Juan Orlando Hernández, who was re-elected in 2018 despite a constitutional ban on second terms and in a vote that was marred by irregularities. He promised a “better life” as a campaign slogan but has been unable to deliver that for the country’s most vulnerable.

Hernández’s office did not respond to a request for comment. The president said recently that “I swore not to rest until Hondurans’ peace and tranquility are recovered, and I will continue to do that.” Last week, he said his administration’s economic policies are working, and “We are doing well.”

Washington has threatened the Northern Triangle countries with security and humanitarian aid cuts if they are unable to staunch the flow of migrants. But that could have the opposite effect if jobs and anti-poverty programs suffer.

Rolando Lázaro Bautista lives on an unpaved street dotted with dirt-floor, wood-and-corrugated metal homes. It’s an area without sewers or running water, and hundreds have left.

It’s also a stone’s throw from luxury condominium towers, and municipal authorities have long wanted to clear away the shacks. During one attempt, the homes of several of Bautista’s neighbors were torched. Human rights workers have obtained a court order protecting them for now.

Bautista says he went north twice. First in a caravan in January, only to be deported from Mexico. Next he hired a “coyote,” or smuggler, but was caught three days’ walk into Texas on his way to Houston and deported.

The 47-year-old doesn’t intend to try again after the experience of being sunburnt, exhausted and forced to hide for days in a warehouse and a sweltering safe house: “You suffer from the thirst and hunger.”

Back home he found construction work for this week. But after that there is nothing certain. He and his wife rely on money sent by their daughter who migrated to Spain and who paid the coyote’s $7,500 fee. Meanwhile, they take care of the two daughters she left in San Pedro Sula.

Honduran sociologist Jenny Argüello says the basic foods needed by the average family of five costs the equivalent of about $650 a month, more than the monthly minimum wage of around $400.

In the 1990s most people who migrated did so in search of a better life, Argüello said. “Today it is the only alternative Hondurans have to survive.”