Trump’s ‘great patriot’ farmers follow him into a trade war 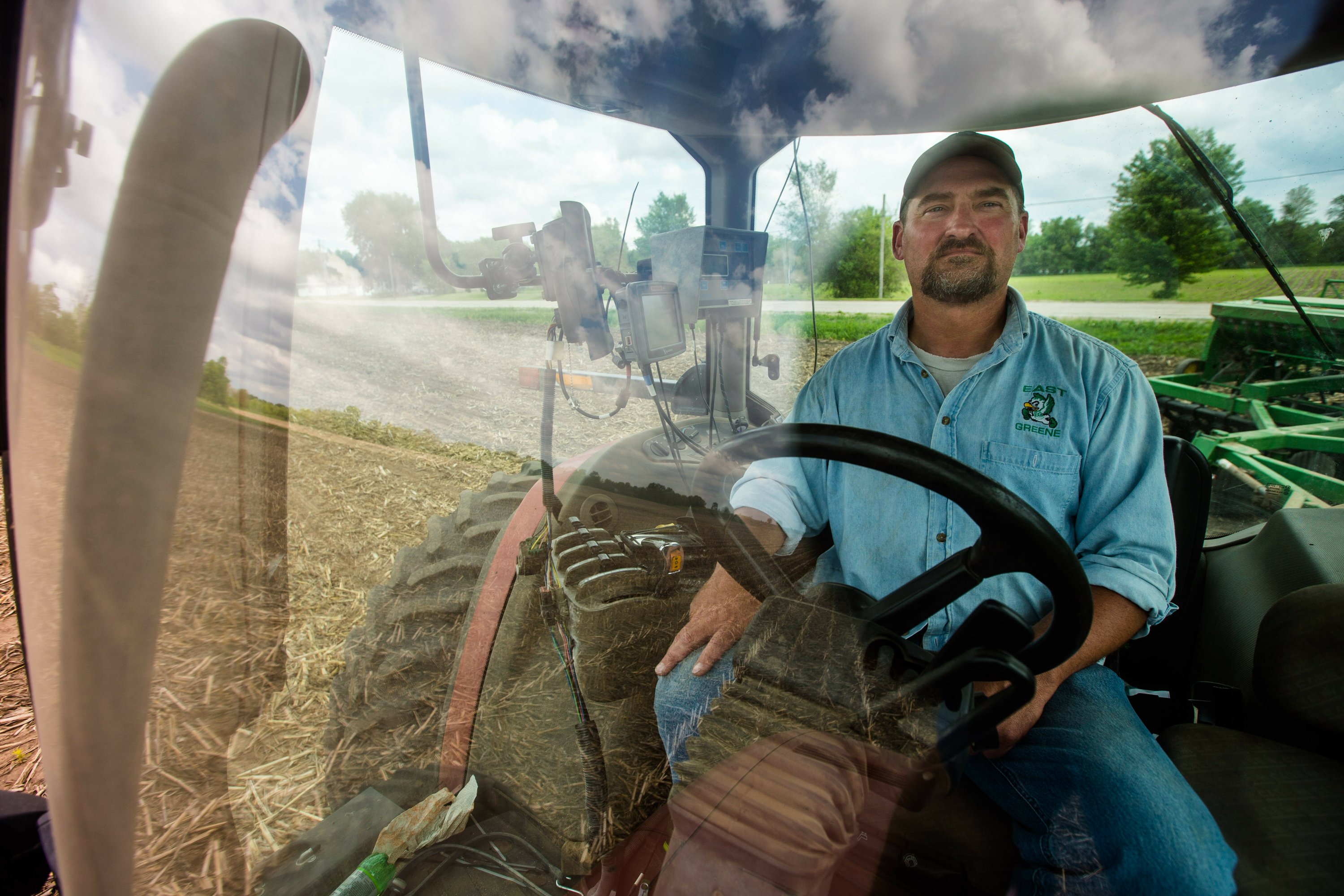 MADRID, Iowa — Iowa farmer Tim Bardole survived years of low crop prices and rising costs by cutting back on fertilizer and herbicides and fixing broken-down equipment rather than buying new. When President Donald Trump’s trade war with China made a miserable situation worse, Bardole used up any equity his operation had and started investing in hogs in hopes they’ll do better than crops.

A year later, the dispute is still raging and soybeans hit a 10-year-low. But Bardole says he supports his president more today than he did when he cast a ballot for Trump in 2016, skeptical he would follow through on his promises.

“He does really seem to be fighting for us,” Bardole says, “even if it feels like the two sides are throwing punches and we’re in the middle, taking most of the hits.”

Trump won the presidency by winning rural America, in part by pledging to use his business savvy and tough negotiating skills to take on China and put an end to trade practices that have hurt farmers for years. While the prolonged fight has been devastating to an already-struggling agriculture industry, there’s little indication Trump is paying a political price. But there’s a big potential upside if he can get a better deal — and little downside if he continues to get credit for trying for the farmers caught in the middle. It’s a calculation Trump recognizes heading into a reelection bid where he needs to hold on to farm states like Iowa and Wisconsin and is looking to flip others, like Minnesota.

A March CNN/Des Moines Register poll of registered Republicans in Iowa found 81% approved of how Trump is handling his job, and 82% had a favorable view of the president, an increase of 5 points since December. About two-thirds said they’d definitely vote to re-elect him. The poll had a margin of error of 4.9 percentage points.

A February poll by the same organizations found 46% of Iowans approved of the job Trump was doing — his highest approval rating since taking office — while 50% said they disapprove. The margin of error was 3.5 percentage points.

Many farmers are lifelong Republicans who like other things Trump has done, such as reining in the EPA and tackling illegal immigration, and believe he’s better for their interests than most Democrats even on his worst day. They give him credit for doing something previous presidents of both parties mostly talked about. And now that they’ve struggled for this long, they want to see him finish the job — and soon.

“We are the frontline soldiers getting killed as this trade war goes on,” said Paul Jeschke, who grows corn and soybeans in northern Illinois, where he’s about to plant his 45th crop.

“I’m unhappy and I think most of us are unhappy with the situation. But most of us understand the merits,” he added. “And it’s not like anyone else would be better. The smooth-talking presidents we’ve had recently – they certainly didn’t get anything done.”

When the trade war started last summer, China targeted its first round of tariffs on producers in agricultural and manufacturing states that were crucial to Trump’s 2016 victory, such as Iowa, Michigan, Ohio and Wisconsin. Particularly hard hit were producers of soybeans, the country’s largest farm export.

The most recent round of trade talks between the Trump administration and China broke up earlier this month without an agreement, after Trump accused China of backing out on agreed-to parts of a deal and hiked tariffs on $200 billion of imports from China. China imposed retaliatory tariff hikes on $60 billion of American goods, and in the U.S. the price of soybeans fell to a 10-year low on fears of a protracted trade war. U.S. officials then listed $300 billion more of Chinese goods for possible tariff hikes.

As China vowed to “fight to the finish,” Trump used Twitter to rally the farming community.

“Our great Patriot Farmers will be one of the biggest beneficiaries of what is happening now,” Trump tweeted. “Hopefully China will do us the honor of continuing to buy our great farm product, the best, but if not your Country will be making up the difference based on a very high China buy.”

He added: “The Farmers have been ‘forgotten’ for many years. Their time is now!”

Trump has promised an aid package, some $15 billion for farmers and ranchers, following $11 billion in relief payments last year.

It’s been six years since farmers did better than break even on corn, and five years since they made money off soybeans.

U.S. net farm income, a commonly used measure of profits, has plunged 45 percent since a high of $123.4 billion in 2013, according to the U.S. Department of Agriculture, reflecting American farmers’ struggle to return to the profitability seen earlier in the decade. Chapter 12 bankruptcy filings for farm operations in the upper Midwest have doubled since June 2014, when commodity prices began to drop. The hardest hit were farms and dairy operations in Wisconsin, a state that supported Democrats for president for most of recent history before backing Trump and that will be a fierce 2020 battleground.

“It’s awful expensive to put a crop in,” said Morie Hill, looking over countless green shoots peeking up from his fields in central Iowa. He isn’t sure why more farmers haven’t been forced out.

“Everyone I know is squeezing and doing everything they can, trying to go further with less,” he said.

Brent Renner, who farms with his father in northern Iowa, said while there’s strong support for Trump in their area, frustration is growing. Farming friends regularly check Twitter to see what Trump is saying, and how it might move the market.

“I don’t know how many farming friends I’ve had who’ve said ‘Why can’t someone just take his phone away?’” Renner said. “It’s impossible to think he hasn’t lost support at some level, but what that level is nobody knows.”

Patty Judge, a Democratic former Iowa lieutenant governor and state agriculture secretary, agreed people in Iowa haven’t rushed to move away from Trump. But she thinks voters will be ready for a change in 2020 — and a president who better understands the country’s role in international trade.

“It’s very important to us and to have gone into a trade war without a plan, without an exit strategy, is dangerous and wrong and I think Iowans are going to understand that before the next election,” she said.

The 2018 midterms showed Democrats’ difficulties outside metro areas. AP VoteCast, a national survey of more than 115,000 voters, found rural and small-town residents cast 35% of midterm ballots; 56% of those voted for Republican House candidates, compared with 41% for Democrats. Among small-town and rural white voters the advantage was greater, tilting 63-35 for Republicans.

Jeshke said he gives Trump credit for rolling back regulations that have made it tougher and more expensive for new herbicides to be approved, and for his proposed changes to the Waters of the U.S., an Obama-era environmental measure. Under the act, Jeshke said he needed government approval to mow some areas of his property or make changes to manmade lakes where kids go fishing.

Jeshke says most farmers are more concerned about getting the situation solved than pointing fingers. But if they were to place blame, most of it would be on China, and the rest would be on previous presidents who could have solved the trade imbalances more easily 15 or 20 years ago.

One thing he knows for sure about Trump: “If he rolls over now, we’ll never be able to hold them accountable.”

Renner says farmers are used to having things happen that aren’t in their control — the weather, for example — but finding a way through. It’s a quality he says is clearly on display now.

“We’re an optimistic people,” he said. “We’ll keep our chins up and keep moving ahead.”