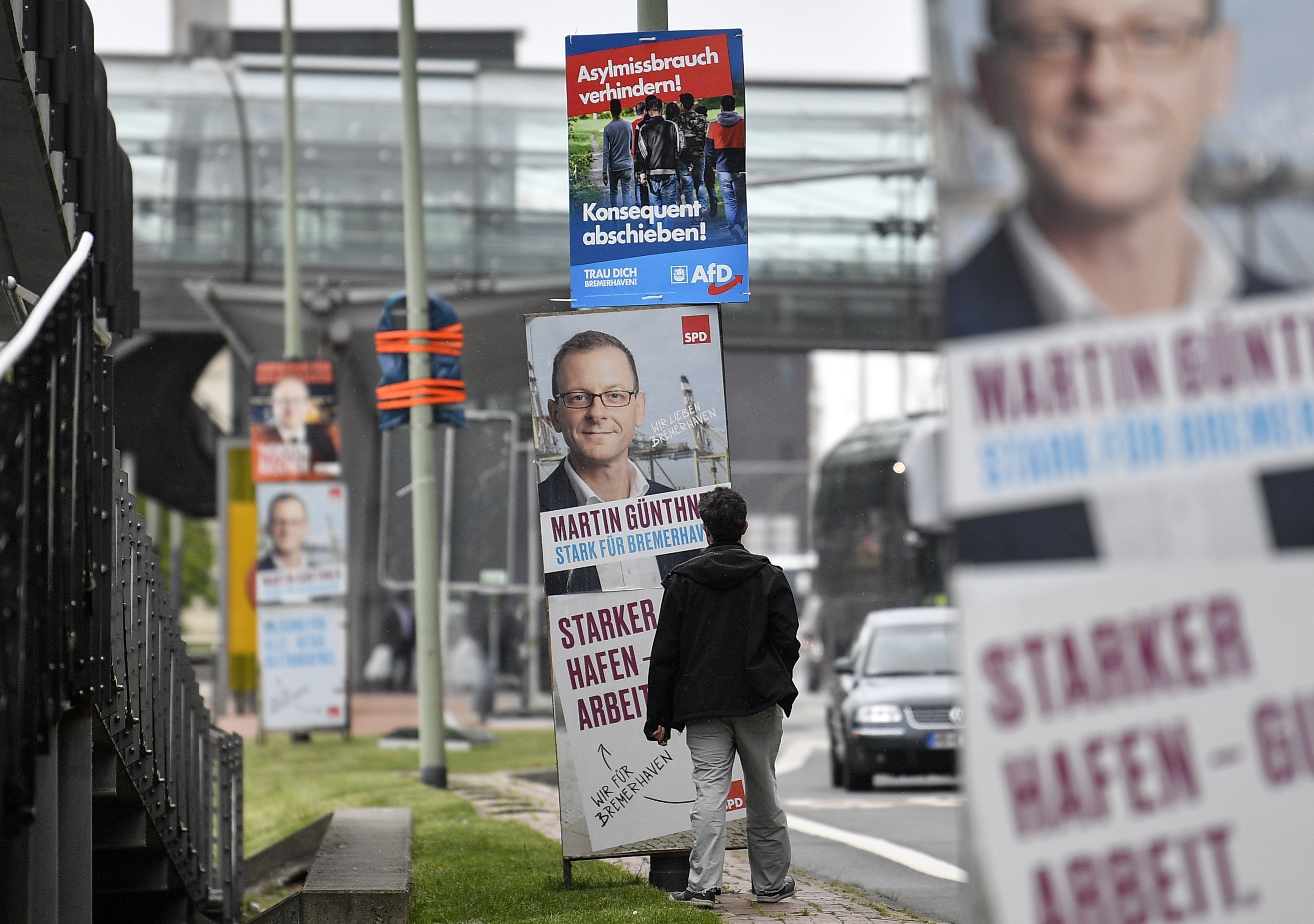 BREMERHAVEN, Germany — If Joachim Schuster is worried about his job, he’s not letting on.

A jolly German in his mid-fifties with spiky greying hair and a broad smile, Schuster was elected to the European Parliament five years ago for the center-left Social Democrats. Now he’s speaking to students at a vocational college in the northern city of Bremerhaven in an effort to save his seat, defying the downward trend that’s beset traditional parties in Europe in recent years.

Support for the Social Democrats has ebbed dramatically across Germany in recent years, but nowhere is its fate more closely watched than in the city-state of Bremen, of which Bremerhaven is a part. The Social Democrats have dominated the proud port’s political scene since the end of World War II, winning 19 straight elections and governing it for 73 years.

That run could end on May 26, when voters in Germany cast ballots for the European Parliament and those in Bremen also hold a state election.

A poor result in both elections could hasten the end of the Social Democrats’ fractious coalition with Chancellor Angela Merkel’s center-right Union bloc in Germany’s national legislature and further reduce the center-left’s overall influence on Europe’s political landscape.

A new political grouping of nationalist and populist parties is trying to capitalize on voter discontent, vowing to upend the continent’s traditional political power structure.

“Establishment politics in Germany, but also in the EU, often haven’t managed to really solve the issues the population believes are pressing,” Schuster told The Associated Press.

The loss of tens of thousands of jobs in Bremen’s shipyards — mirroring similar industrial declines in other parts of Europe — has also sapped the Social Democrats’ traditional base, said Schuster.

Voters ruefully compared the region’s current economic situation to its heyday in the 1970s.

“Lousy, really bad and getting worse all the time,” retiree Eta Grotheer said, making her way down Bremerhaven’s main shopping street. “The only thing we have left is the port, otherwise there’s nothing.”

While Grotheer had little good to say about Merkel and her center-right Christian Democratic Union, it’s the ‘reds’ in Bremen who disappoint her the most.

“The Social Democrats used to be a good workers’ party,” she said. “Now there’s nothing.”

Grotheer predicted that right-wing parties would benefit from voters’ frustration.

If past elections are any indication, many voters in Germany could also stay away from the polls, harming large establishment parties like the Social Democrats.

“We had a terrible voter turnout at the last state elections,” said Andreas Klee, a political scientist at the University of Bremen. “That’s an incredibly bad sign for the mood in the country as far as democracy and citizens’ trust in politics is concerned.”

According to Klee, the erosion of traditional party affiliations — which once saw entire families or streets vote the same way — means voters today are more inclined to shop around for a party that speaks directly to their concerns.

Voters worried about immigration and crime are drawn toward the nationalist Alternative for Germany party or Bremen’s right-wing Citizens in Rage. Those concerned about climate change and air pollution head to the Greens, who have seen a remarkable rise in poll support in recent months.

The proportional representation in European electoral systems also gives smaller parties a realistic chance of entering parliament, unlike in the United States, where only two parties dominate.

Last year’s election in Italy offers a glimpse of what can happen if Europe’s main centrist parties collapse. Italian voters angry about unemployment, corruption and immigration propelled the right-wing League party and the anti-establishment Five Star movement into a ruling populist coalition in the EU’s fourth largest economy.

Projections released by the European Parliament this month show the center-right European People’s Party bloc, which includes Merkel’s Union, losing 37 of its 217 seats in the 751-seat assembly. The center-left S&D group, which includes Germany’s Social Democrats, is forecast to drop from 186 seats to 149.

“Everywhere that social justice is moved into greater focus and linked to perspectives for the whole country, we are relatively successful,” he said, citing Portugal and Spain, where the center-left remains the dominant political force.

The prospect of losing its bastion in Bremen is causing jitters among senior Social Democrats in the capital. The party’s top brass is traveling to the city on Friday for a final rally ahead of the European and state elections.

Speaking after a town hall meeting with workers’ representatives, Bremen mayor and governor Carsten Sieling tried to downplay the possibility that the Social Democrats might face a major election upset this week which could send shockwaves across Europe. He pointed to the city’s recent drop in unemployment — still high by German standards — and improved public finances.

Winning Bremen and getting a decent result in the European election might give the party “the stability we need,” he said.