Only on AP: Redskins recovery methods aim to reduce injuries 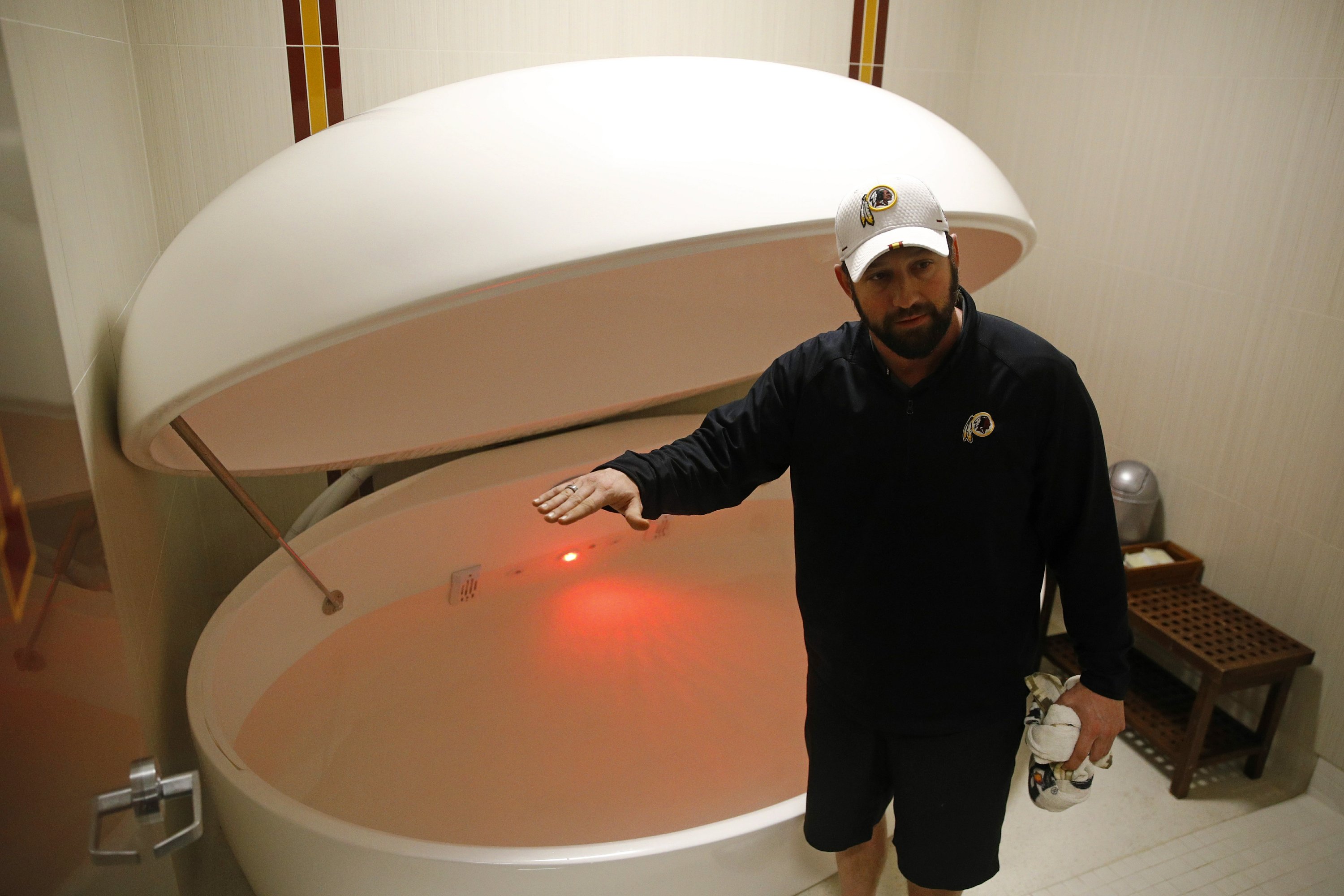 ASHBURN, Va. — Sunglasses shield your eyes from the infrared lights that give oxygen to your body’s cells. Ugg boots, rubber gloves and shorts are the only protection from freezing temperatures as cold as minus 200 degrees. Then comes the sensory deprivation of floating pitch black in 1,000 pounds of Epsom salt while meditation music plays.

And that’s just at work. At home is a custom-made mattress designed to get just the right about of sleep.

Massage tables, zero gravity chairs, a laser-therapy table that looks like a tanning bed, a cryotherapy chamber and giant float pods make up the Washington Redskins’ state-of-the-art rest and recovery room. Combined with advanced mattress and pillow technology, it’s all part of Washington’s pursuit of better injury prevention and recovery after no NFL team put more players on season-ending injured reserve over the past two years combined.

Professional and college sports teams are always looking for the next edge, and the Redskins hope they’re on the right track by zeroing in on rest and relaxation as a way to keep players healthier and more focused. The idea came from Hess and owner Dan Snyder visiting English Premier League soccer clubs and discovering after nutrition and player tracking, they considered sleep the next great frontier.

Hess and player recovery director Hutch Call struck up a partnership early last season with Bedgear , which works closely with cutting edge owner Mark Cuban’s Dallas Mavericks and provides Redskins players, coaches and staff with mattresses, pillows, sheets and blankets optimized for their needs. Call said focus gleaned from the right amount of sleep could be the difference between a receiver catching a ball and bringing it down and getting it knocked out of his hands, plus there are more practical elements.

“Our bodies go through a restoration process while we sleep, doing important things like balancing hormones related to tissue growth, stress control, appetite and weight management,” MIT research scientist and Bedgear sleep scientist and biometrics expert Lorenzo Turicchia said. “When a person does not get the right amount of sleep, their bodies will not be able to adequately repair damaged tissues, thus prolonging the healing time. When a player has an injury, the damaged tissues need extra time to repair and heal.”

Redskins players have required plenty of healing. The team led the league with 27 players on injured reserve last season and put 19 players on in 2017.

Late in the 2017 season, since-released safety D.J. Swearinger criticized some teammates for not taking care of their bodies well enough to limit preventable injuries, which contributed to missing the playoffs.

“You’re not supposed to wait till something happens to you to get treatment,” Swearinger said at the time. “You’re supposed to do stuff to prevent injuries, and I don’t think as a group we did that as much as other teams I’ve been on. … Some injuries are freak injuries.”

Another injury happened Monday when linebacker Reuben Foster stepped on an offensive lineman’s foot and went down wrong on his left leg. Foster had to be carted off in another hard-luck injury for Washington that’s hard to prevent.

“When you have broken bones, (torn) ACLs, things like that, you’re going to have those type of injuries,” Hess said.

Despite the lengthy injured list, Hess said the team reduced soft-tissue injuries — such as sprains, strains, tendinitis and damage to muscles, tendons and ligaments — by over 50 percent last season. He hopes that progress will continue now that players have a full offseason to take advantage of the recovery room at the practice facility.

After a typical Sunday game, massage therapists and a chiropractor are available for players on Monday and then again Friday. The recovery room is always open and sometimes is the location of meetings to help a player relax and not hunch over a desk while watching film.

The three-step restoration process starts with a minimum of 12 minutes inside a photobiomodulation bed that resembles a tanning booth and uses three types of infrared light to help repair cells all over the body. Hess said it’s good for recovery and studies have shown it improves strength on lifts in the weight room.

The next step is three finger-tingling minutes inside the cryotherapy chamber, where it feels difficult to breathe because the extreme cold tricks the body into rushing blood to major organs to survive. It’s different than getting in a cold tub full of ice or putting an ice bag on because the seconds and minutes after cryotheraphy come with an endorphin release capable of waking up a groggy player.

“Your core body temperature shoots up because of the fight-or-flight,” Call said. “You just had everything (go) to your major organs. Now it’s just shooting back out in your bloodstream.”

The coup de grace is up to an hour latched inside one of three Superior float tanks designed to take away all the senses and that can actually make players fall asleep. Hess said it’s supposed to replicate the weightless feeling of a baby in a womb, and it feels similar to floating in the Dead Sea.

“It’s an amazing experience,” Hess said. “Our goal is to get them to that pre-sleep state to shut their body down. It will lower their heart rate. The temperature of the water replicates your body temperature. Really we’re taking all sensation out.”

A player showers and puts on lotion to keep the salt from damaging skin, and then a lot of times it’s off to bed to rest up for the next grueling day. Quarterback Colt McCoy has been big on giving feedback on bedding technology, and Bedgear is working to develop ankle pillows to help athletes elevate their feet after the stress of a game or practice.

“It’s a problem that a lot of the players have when they’re on their feet for hours during a game and they’re getting sort of this compression and swelling in their lower limbs,” Bedgear vice president of strategy Shana Rocheleau said. “They just kind of hodgepodge things together today to put their feet up and try to get the blood flowing.”

Coach Jay Gruden said players choose how much of the recovery techniques they want to get involved with, and that varies throughout the roster. He has tried out the recovery room devices himself, thinks they’re pretty cool and most importantly believes they’ll make a difference on the injury front.

“Give these guys just another way to help them recover,” Gruden said. “The players, even if it gives them a mental state of mind where, ‘Hey, I feel pretty good,’ then let’s give them every avenue to feel that way.”