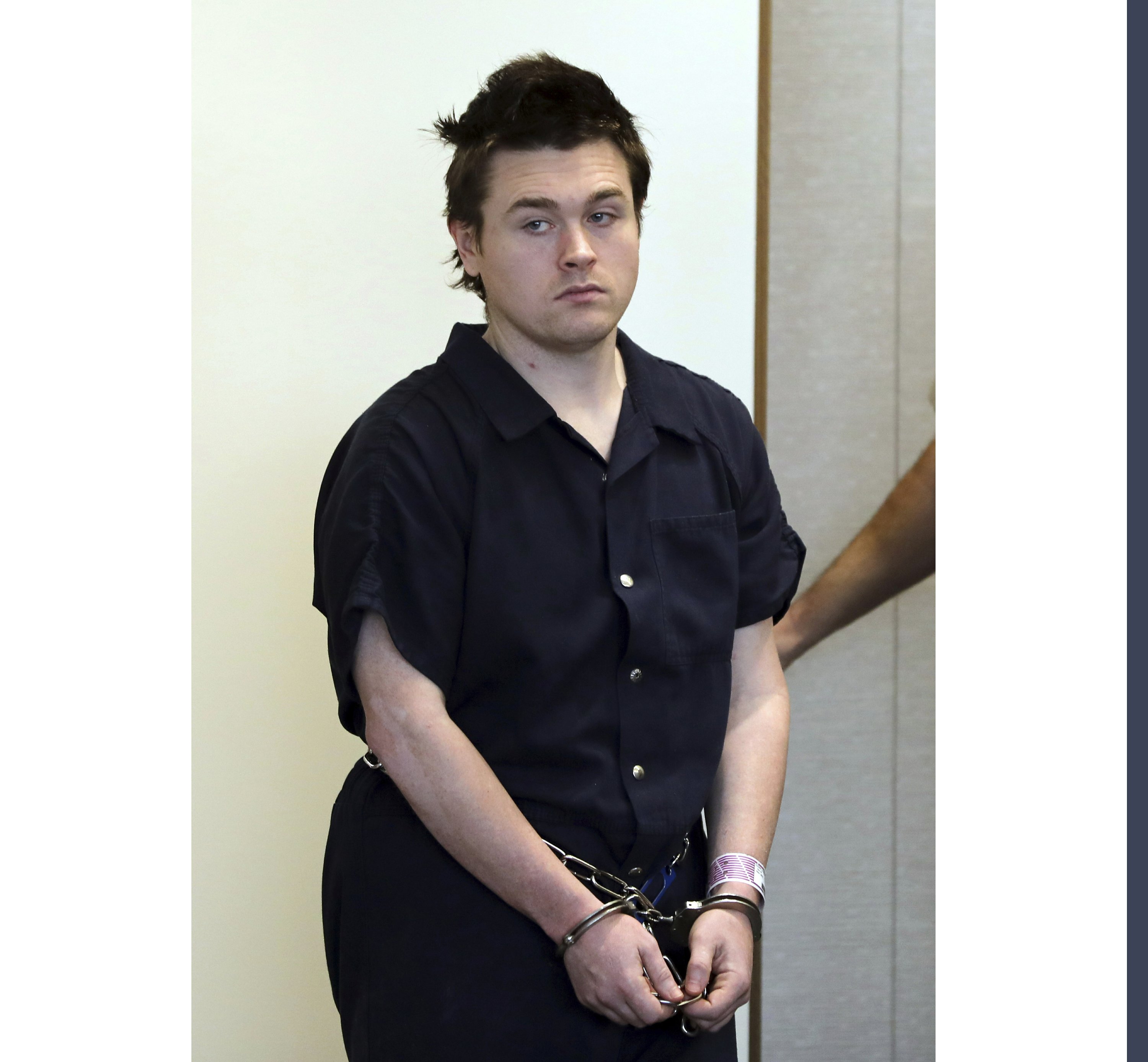 DENVER — Only hours before women marched through many U.S. cities in January, Christopher Cleary set off a manhunt when he posted a Facebook message threatening to kill “as many girls as I see” in retaliation for years of romantic rejection.

Cleary, 27, called himself a virgin who never had a girlfriend, stoking fears of another deadly rampage by a man blaming women for his problems. When police tracked his cellphone and arrested the Colorado resident at a McDonald’s restaurant in Provo, Utah, Cleary said he had been upset and wasn’t thinking clearly.

The  post fit a pattern of behavior for a troubled man with a history of terrorizing women he met over the internet.

His plea deal with Utah prosecutors appears to fit a pattern of lenient punishments — a common outcome for cyberstalking and online harassment cases.

“The vast majority of people, if there isn’t a lot of training and education going on, tend to dismiss these things,” said Carol Tracy, executive director of the Women’s Law Project in Philadelphia. “That’s why stalking is so dangerous. You think, ‘It’s not a crime. He’s got free speech.’”

Cleary pleaded guilty in April to a reduced charge of attempted threat of terrorism, a felony punishable by up to five years in prison. But prosecutors agreed to recommend probation, sparing him any additional jail time in Utah beyond the months he’s served since his Jan. 19 arrest.

If a judge accepts the recommended sentence during a hearing Thursday in Provo, it won’t be the first time Cleary avoids a prison term. Judges in Colorado gave him similar breaks after a string of women and teenagers accused him of making threats and harassing them.

The prosecutor on the Utah case said the plea bargain is designed to secure a felony conviction that could help Colorado authorities get a prison sentence for Cleary’s probation violations.

Finch said Utah’s criminal statutes leave a “huge gap” between a misdemeanor charge of threatening violence and a felony charge of making a threat of terrorism. He said his office views Cleary as an “unbelievably dangerous individual” but wasn’t certain it could prove the “stupid, horrible” message he posted on his Facebook account rose to the level of a terrorism threat.

“I did my review of the case with some concern over the statutes,” Finch said. “The problem is that I feel (Cleary) falls right in the middle of those two areas, but most likely he falls in the lowest level.”

He noted the Utah judge is still free to sentence Cleary to prison.

At least eight people since 2012 have contacted authorities to accuse Cleary of stalking or harassing them, according to an Associated Press review of police and court records. Police in Colorado also investigated complaints that Cleary threatened to bomb a grocery store in 2013 after an employee refused to cash his check, threatened to slit the throat of a Denver city employee after his car was towed, and threatened a mass shooting at a mental health facility during a phone call in 2016.

Cleary, a Denver resident, was still on probation in Jefferson County when he was arrested in Utah. Pam Russell, a spokeswoman for the county prosecutor’s office, said once the Utah case has concluded, Cleary will be returned to Colorado and prosecutors will seek to revoke his probation and send Cleary to prison.

Cleary also has a warrant for his arrest in Denver, where a 17-year-old told police in 2015 that he sent her a string of threatening text messages, including “I own multipul guns I can have u dead in a second.”

A public defender representing Cleary in Utah declined to comment. Cleary told the officer who arrested him in Provo that he has “some kind of impulse disorder” and had been taking medication but couldn’t remember what type, according to records. Earlier, a Colorado defense attorney said in court that Cleary had been diagnosed with major depressive disorder.

The timing of Cleary’s Utah arrest — on the second anniversary of the Women’s March on Washington — and the language of his Facebook threat led to speculation on the internet and in some news reports that he could be an “incel,” short for “involuntary celibate.” The incel movement, an online subculture linked to deadly attacks in California, Toronto and Florida, promotes the misogynistic idea that men are entitled to have sex with women.

“All I wanted was to be loved,” Cleary wrote in his post, “yet no one cares about me I’m 27 years old and I’ve never had a girlfriend before and I’m still a virgin, this is why I’m planning on shooting up a public place soon and being the next mass shooter cause I’m ready to die and all the girls the turned me down is going to make it right by killing as many girls as I see.”

A Colorado police detective who investigated two women’s stalking accusations said he didn’t find any evidence Cleary identified as an incel or had other ideological motives. “I truly think he’s just wired differently,” Arvada Police Detective Michael Roemer said. And two of Cleary’s accusers have said they had a sexual relationship with him.

Experts said Cleary appears to be emblematic of how police and courts typically handle cyberstalking and online harassment cases.

University of Maryland law professor Danielle Citron, author of the book “Hate Crimes in Cyberspace,” said state criminal statutes outlawing such behavior typically are misdemeanors with light punishments that don’t deter offenders. The criminal justice system tends to view online abuse as “no big deal,” she said, and perpetrators get empathy while “we forget and erase the victims.”

The sentencing in Cleary’s Jefferson County, Colorado, case came in April 2018. He got three years’ probation for stalking three women.

One victim, Hannah Keller, saw his mugshot on television after his Utah arrest. She said he harassed her with phone calls, text messages and Facebook posts on and off for roughly two years before she finally contacted police in 2015. “He didn’t ever explain a disregard for women when I was with him,” she said. “I just thought he was messed up in general.”

A second victim, Cleary’s former caseworker, told police in 2017 that she had a sexual relationship with him but tried to end it. She said Cleary made repeated death threats and created fake Craigslist ads soliciting sex and rape, using her phone number and an address within a block of her home.

During a hearing last year, Jefferson County Judge Dennis Hall said he and a second judge struggled to fashion appropriate sentences for Cleary’s convictions. Hall said they ultimately decided a prison sentence “would just make it all worse,” according to a transcript.

“I’m obviously concerned about the victim here … but my concern is that I think to make the community a better place, you need to be treated here,” Hall told Cleary. “It won’t do the community any good if I put you in prison and make you worse.”

Prosecutors had urged Hall to sentence Cleary to Community Corrections, a residential supervision and treatment program that’s an alternative to prison or probation.

Cleary told Hall he was “100% committed” to getting help. He said he was seeing a therapist and psychiatrist.

When the second judge asked Cleary how he planned to handle frustrating situations, Cleary insisted he was getting better at controlling his anger. “Before when I got angry, I used to flip out and things would just be the end of the world,” he said, according to a transcript.

That judge, Jeffrey Pilkington, warned Cleary a prison sentence may be “the only option” if his probation was revoked again.

Victoria Lathrop is one of Cleary’s earlier victims. She said he seemed like a nice guy when they met online in 2015. They communicated for a few weeks by texts and Facetime. But after she turned down his sexual advances, Cleary created a Facebook page using her name and a topless photo he apparently captured while she changed clothes during a video chat. She said Cleary sent Facebook friend requests to her friends from the fake account.

Lathrop’s ordeal didn’t end when a judge sentenced Cleary to probation for harassing her in 2015. She kept hearing from him for years, from different numbers or online identities. Then, last year, he sent her the naked Facebook profile.

Lathrop called police again, but she says they told her there was no way to be sure it was him.

She wonders if authorities should have taken her case more seriously.

“If he’s so persistent stalking women and doing this stuff, I don’t think that violence is past him,” she told AP.