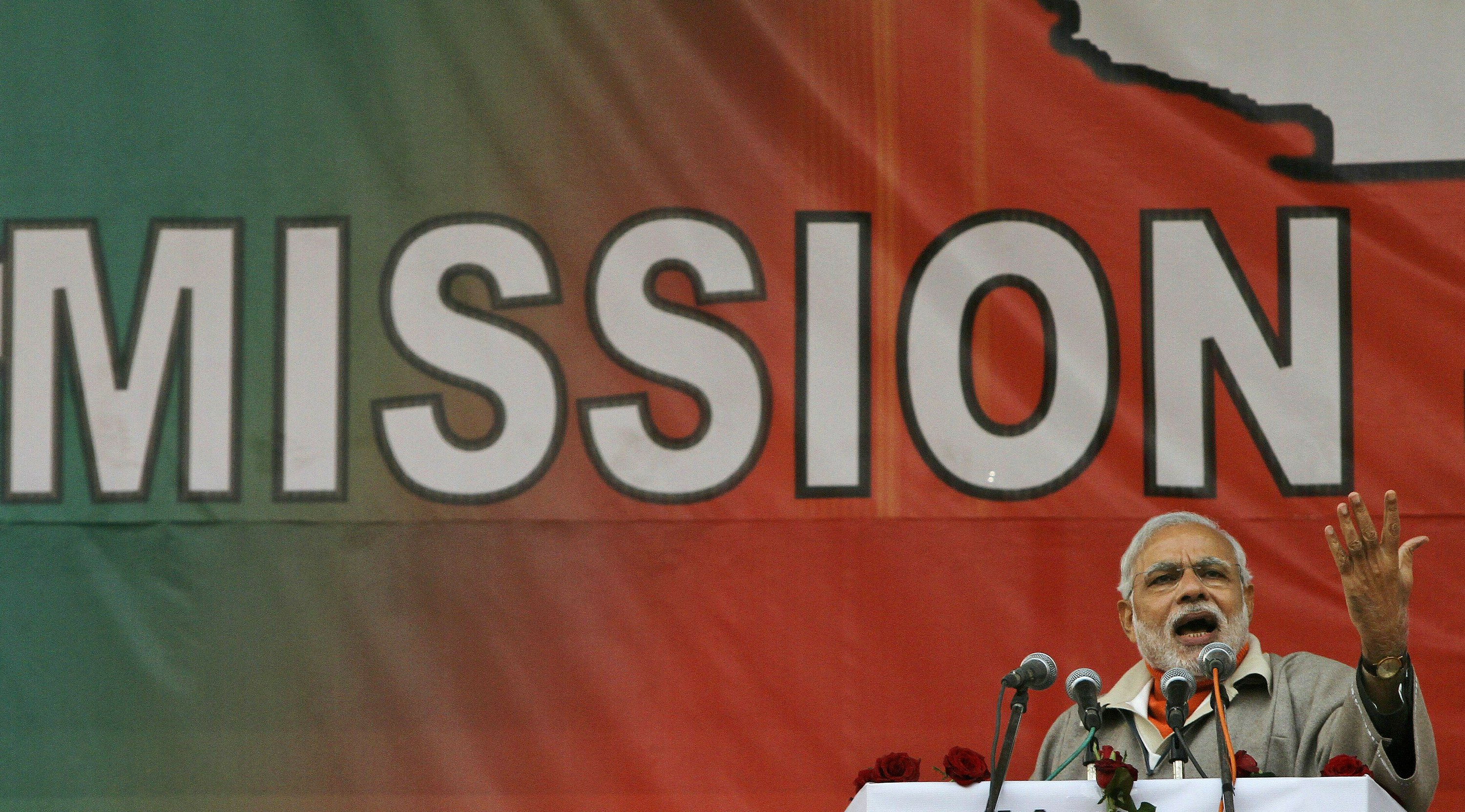 In a campaign speech in April, he pledged his Hindu nationalist Bharatiya Janata Party in the next five years would “try to address people’s aspirations and take the country to new heights.”

Modi claimed a decisive victory in India’s elections, the vote count showing his BJP winning a commanding majority in the lower house of Parliament allowing it to form a form a government on its own.

The victory signals that millions of Indians believe that Modi’s leadership is what the country needs to become a modern, developed and prosperous nation, while raising questions over how he and his party use such hefty political capital to advance their Hindu-first ideology and development agenda.

Modi’s vision of India is threefold, political analysts say: getting India into the exclusive $5 trillion economy club that includes the European Union, United States, China and Japan; asserting itself as a nuclear power and a force in the world; and placing its Hindu heritage at the center of politics.

By 2030, the BJP has pledged to expand the Indian economy from the world’s sixth-largest, a rank the World Bank said it achieved in 2017, to the third-largest.

Modi believes he can do this by building on some preexisting social programs, including rural electrification, microloans and digitization.

Other ideas, such as doubling the incomes of India’s legions of distressed farmers and building millions of homes to replace mud huts, are promises from his 2014 campaign that are still unfulfilled.

Santosh Ahlawat, a former BJP member of Parliament from the desert state of Rajasthan, said the new administration will be a “people’s government which will go full throttle on all fronts” to build on the achievements of Modi’s first term.

But before Modi can work on ramping up the economy, he will need to address its apparent slowdown, economists said.

Amitabh Kant, chief executive of government-supported think tank Niti Aayog, said the focus of the new government will be to push annual economic growth from 6.6% to 9%.

“We have to carry through more structural reforms and accelerate growth and for that, we have to open up more sectors of the economy. We will continue with our earlier policies of extending electricity, housing and other benefits to reach Indians in rural areas and we will enhance the flows of private investment coming in. The big challenge is to accelerate our growth rate,” he said.

At the heart of the election campaign was an existential conflict between the opposition Congress Party’s idea of a pluralistic, diverse multicultural republic and the BJP’s ideology of Hindu nationalism, in which the country’s fundamental character would not be as a secular state but one with a distinct Hindu ethos where the majority culture dominates.

Anti-Muslim sentiments were expressed repeatedly during the BJP campaign. Party president Amit Shah in April likened Bangladeshi migrants — mainly Muslims — to “termites” and promised to revive a national register of citizens he said would allow the government to “remove every infiltrator, except Buddhists, Hindus and Sikhs.”

The BJP also stoked fears by fielding Sadhvi Pragya Singh Thakur, a Hindu hardliner facing trial on charges connected to a 2008 bombing that targeted Muslims, and who recently called independence leader Mahatma Gandhi’s assassin a “patriot.” Thakur won a seat in Bhopal with more than 60% of the vote.

On the BJP goal of building a Hindu temple at Ayodhya, the site where the Babri Masjid mosque was demolished by a Hindu mob in 1992, the BJP election manifesto stated: “All alternative options will be explored for its construction in a most conducive manner.”

In a February report, Human Rights Watch said that between May 2015 and December 2018, at least 36 Muslims were killed by gangs of cow vigilantes who suspected them of consuming beef or illegally moving cattle. For the Hindu majority, the cow is regarded as sacred and its slaughter is banned in most states.

For political analyst Yogendra Yadav, Modi’s second term promises “a move towards a non-theocratic Hindu majoritarianism. Two is a move towards two kinds of citizenship in India with the minorities relegated to second-class status. In short, we will see a move towards Putin’s Russia.”

Vijay Chauthaiwale, a senior BJP official in charge of the party’s foreign affairs, rejected the accusation that Modi has created a culture of intolerance of minorities.

Yadav said he based his somber prediction on Modi’s first term.

“We have seen a serious truncation of every democratic space, a downplaying of constitutional freedoms, and shrinking space for minority rights. Now, we will move towards what I call electoral authoritarianism under which we will have regular elections certainly, but every other aspect of democracy will gradually be extinguished,” he said.

As much as Modi’s victory is a testament to his political prowess, though, it also signals the lack of a credible alternative, voters and analysts said.

Fashion designer Sandeep Verma, 39, said he wasn’t a BJP supporter but voted for the party in the elections.

“A country like India needs a decisive leader and the people did not find that in Rahul Gandhi. There was no alternative to Modi,” Verma said.