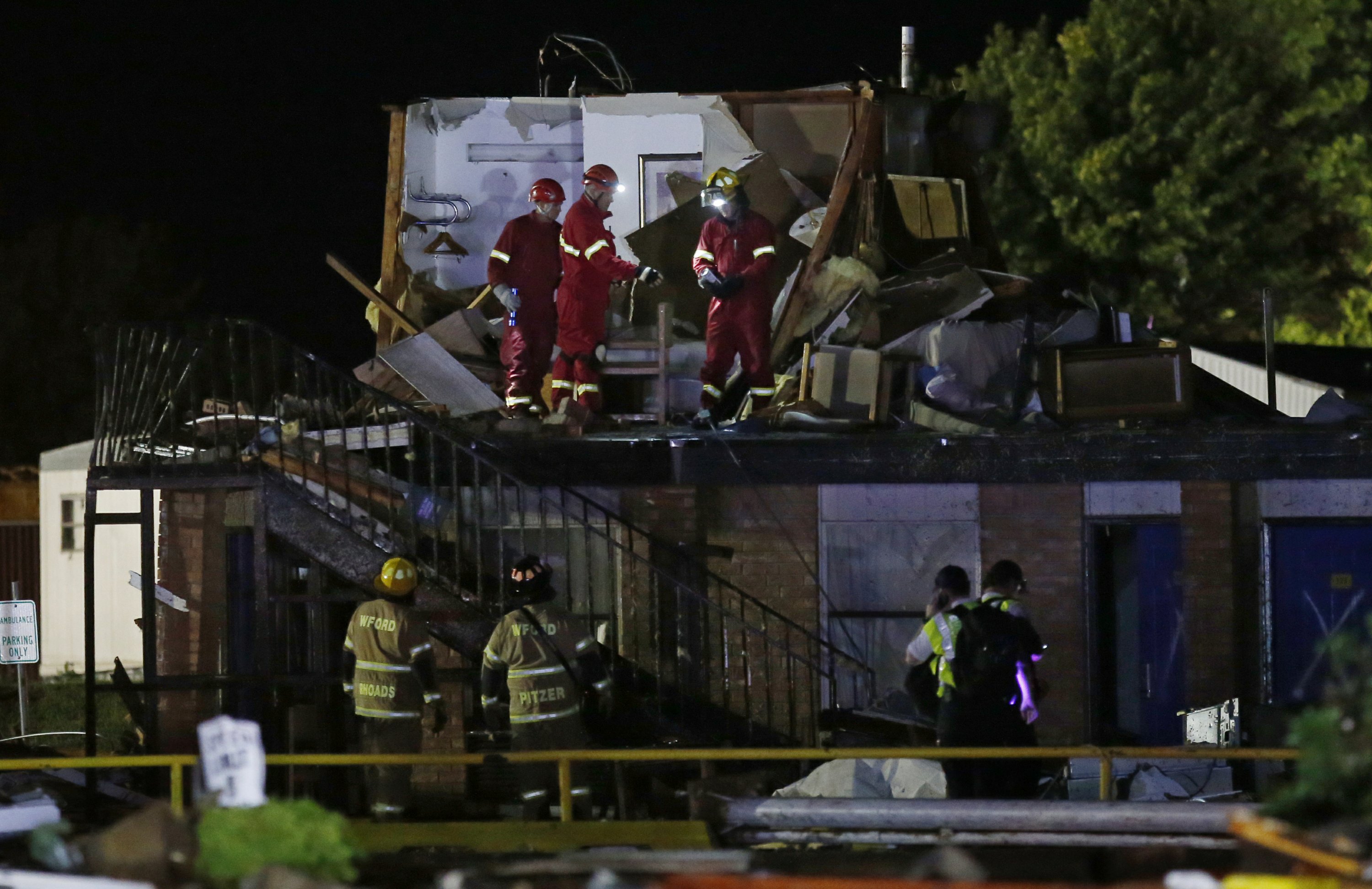 EL RENO, Okla. — A likely tornado killed at least two people as it destroyed a motel, roared through a nearby mobile home park and caused significant damage in the Oklahoma City area, officials said Sunday.

El Reno Mayor Matt White said during a news conference that “there have been two fatalities at this point in time,” adding that officials are currently working to notify relatives.

National Weather Service meteorologist Rick Smith in Norman told The Associated Press that the suspected twister hit El Reno on Saturday night as a powerful storm system rolled through the state. Crews were expected to arrive on the scene Sunday to determine the severity of the damage to the town located just west of Oklahoma City.

The American Budget Value Inn was destroyed by the storm. Images from the scene showed emergency crews sifting through rubble after part of the motel’s second story collapsed into a pile of debris strewn about the first floor and parking lot. Elsewhere, overturned cars and twisted metal could be seen briefly as intermittent lightning flashed across the sky and the wailing sirens of approaching emergency vehicles were heard in the distance.

Trailers at the Skyview Estates mobile home park adjacent to the motel also were damaged, as was part of a nearby car dealership.

“We have absolutely experienced a traumatic event,” White said during an earlier news conference Sunday.

White said several people were transported to hospitals in Oklahoma City, but did not give an exact number.

“We’re doing a search and rescue right now … we have all hands on deck,” White said.

Saturday night’s storm in El Reno comes after a week of tornados, severe rain and flooding in the Southern Plains and Midwest, including a tornado that hit Jefferson City, Missouri. The region’s most recent spate of bad weather and flooding has been blamed for at least nine deaths.

Tweety Garrison, 63, told The Associated Press early Sunday that she was inside her mobile home — along with her husband, two young grandchildren and a family friend — when the storm hit. Garrison said when she heard the storm coming she immediately hit the ground. Moments later, she said, she heard the mobile home next door slam into hers, before it flipped over and landed on her roof.

Garrison said the incident lasted five to 10 minutes. She said there was a tornado warning on her phone but the sirens did not go off until after tornado hit.

Garrison’s 32-year-old son, Elton, said he’d heard the wailing tornado sirens and had just laid down at home about a half-mile (.8 kilometer) away when his phone rang. He recognized his mother’s number, but there was no voice on the other end when he answered. “I thought, ‘That’s weird,’” Elton Garrison said.

Then his mother called back, and delivered a chilling message: “We’re trapped.”

Elton said when he arrived at his parent’s home, he found it blocked by debris and sitting with another trailer on top of it. He immediately began clearing a path to the home so that he could eventually lift a portion of an outside wall just enough so that all five occupants could slip beneath it and escape.

“My parents were in there and two of my kids, one 9 and the other 12 … my main emotion was fear,” Garrison said, who has lived in El Reno for about 26 years. “I couldn’t get them out of there quick enough.”

Garrison said he was not alarmed by the warning sirens when he first heard them at home. “We hear them all the time here, so it didn’t seem like a big deal … I heard a lot of rain with the wind. But when it kinda got calm all of a sudden, that’s when it didn’t feel right.”

Garrison, whose sport utility vehicle remained at the mobile park early Sunday because the area had since been cordoned off by authorities, said his parents had only recently recovered after losing their previous home to a fire a few years ago.

“Now this,” he said, before expressing gratitude that everyone inside his parents’ home had emerged without serious injury.

In the next breath, Garrison added: “Items can be replaced. Lives can’t.”