A wake for a Venezuelan boy, and a nation’s anguish 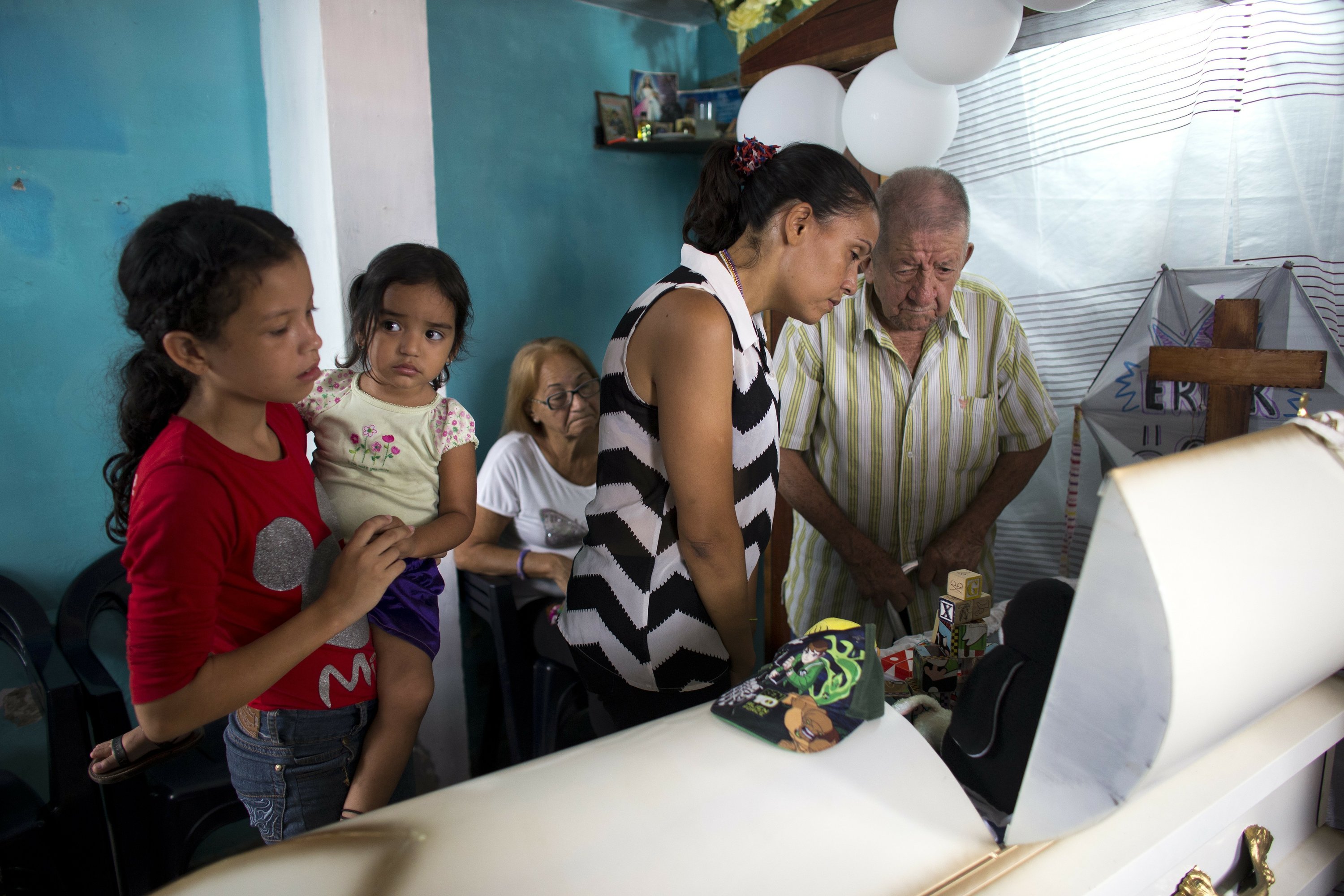 CARACAS, Venezuela — The family of an 11-year-old Venezuelan boy who died of cancer while waiting for a bone marrow transplant held an open-casket wake on Tuesday, giving visitors a chance to see him for the last time as they wondered whether the death could have been avoided.

Erick Altuve lay in an eggshell white coffin with gold-colored trimming. Toys lay on the glass top, framing his face: a couple of stuffed penguins, a tiny flatbed truck, drawing pencils. There were two plastic bottles of the vanilla and chocolate milkshakes he used to drink to try to build strength.

Behind him were a kite with his name on it and a wooden crucifix.

“Sharing with him was the best,” said the boy’s tearful father, Gilberto Altuve. “It’s hard to know he’s not here anymore.”

The intimate occasion in the Caracas slum of Petare was also part of a nation’s anguish over the humanitarian disaster that has gutted the ability of Venezuela’s health system to adequately treat the sick. Erick Altuve was among several cancer-stricken children whose deaths have ignited a bitter dispute between the government and opponents over who is to blame.

Protesters gathered this week outside the J. M. de los Ríos pediatric hospital after the reported deaths there of Erick and three other children on a waiting list for bone marrow transplants. Many said President Nicolás Maduro’s government is responsible for deteriorating medical care in Venezuela, which is also in the grip of hyperinflation as well as food, power and fuel shortages.

But the Venezuelan government alleges U.S. sanctions, aimed at forcing Maduro from power, froze money that could have been used to send the children to Italy for bone marrow transplants. Funds for such operations were previously sent through Venezuela’s state oil company, which has been targeted by those sanctions, according to Foreign Minister Jorge Arreaza.

Venezuela does not have the capacity for bone marrow transplants, complex operations in which a patient’s immune system is wiped out to reduce chances of rejection. A period of waiting then follows to allow the transplant to work and for the immune system to be essentially reset, meaning the patient is susceptible to infections or bacteria in the interim and must be carefully monitored.

Erick Altuve died on Sunday at the J. M. de los Ríos hospital, where relatives of the sick and medical staff say medication and even decent nutrition are lacking.

In political developments, meanwhile, the European Union increased its push for a new presidential election in Venezuela as a way out of the crisis, appointing a former international banker and seasoned diplomat as the bloc’s special envoy for the country. Enrique Iglesias is a former Uruguayan foreign minister.

Also Tuesday, the U.S. ambassador to the United Nations’ main disarmament body walked out of a Geneva session to protest that Venezuela had taken the chair. The move by Robert Wood came after Venezuelan Ambassador Jorge Valero began hosting the session; Valero described Wood’s action as “ridiculous.”

In his hillside home in Petare, Gilberto Altuve said he felt anger and helplessless at the “ignorance” that he believes contributed to his son’s death, but didn’t blame any political faction.

Voice wavering, he repeated some of Erick’s last words.