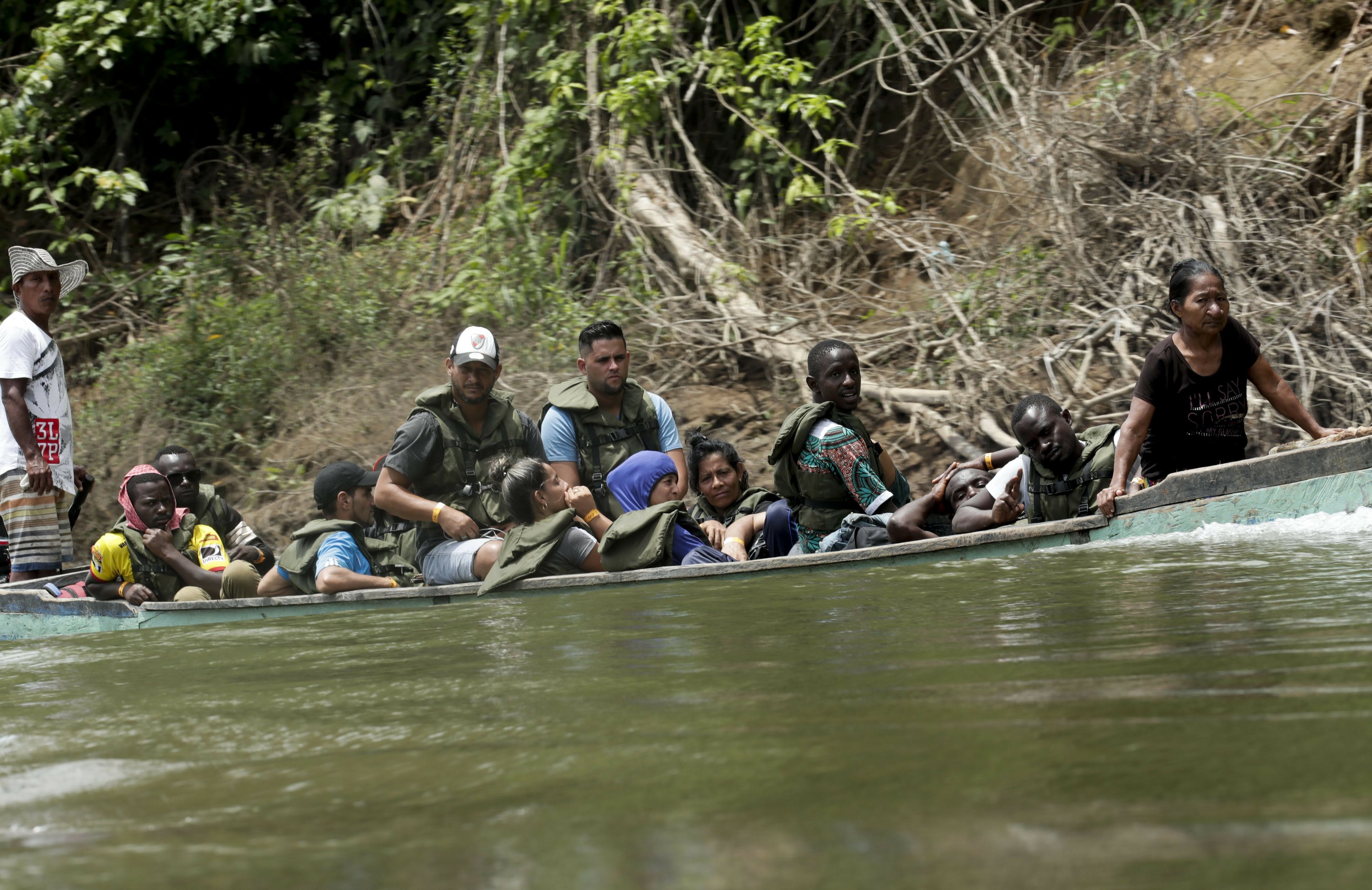 BAJO CHIQUITO, Panama — At first they appeared only as weary silhouettes emerging from the dense foliage on the other side of the Tuquesa River.

Three women, one leaning on a stick for support, and two others carrying their few belongings on their heads accompanied by a 2-year-old boy. Two men, one carrying a machete, arrived soon after to ford the waters to safety in this village, the first populated place on the Panamanian side of the unforgiving Darien Gap.

After trekking for days from Colombia, migrants arriving at Bajo Chiquito, feel relief. It’s a place to rest, seek sustenance, let loved ones know they’re OK and recover their strength. But they’re not out of the woods yet, figuratively or literally — ahead lies one last trek to safety by boat or by foot, and each option entails its own deadly risks for a sudden and unexpected surge of thousands of migrants traversing Darien, where authorities have almost no presence and armed men prey upon travelers.

The most perilous way forward to the next village, Penitas, is overland, hugging the Tuquesa and the Chucunaque rivers. Alexis Bello Vargas, a 25-year-old who recently made that trek with his wife, and 12 other Cubans can attest to that.

They had already been robbed in the heart of Darien and, like many who attempt the last stretch on foot, had no money to pay the $25 river voyage. Just 15 minutes after setting out from Bajo Chiquito they were set upon by two men with hunting rifles who ordered them to stop and hand over their belongings.

“We kept on walking — we had nothing because we had already been robbed — and they shot us,” Bello Vargas said. “We had to give them our backpacks, and they left.”

One bullet passed through the leg of a woman who was part of the group, before lodging itself in Bello’s knee. Fellow migrants helped him the rest of the six-hour journey to Penitas, where workers applied a bandage to immobilize his foot and help reduce swelling in the knee. Sitting on a folding chair and clad in shorts, a tank top and a single flip-flop, he told The Associated Press he didn’t know whether he would have surgery to extract the projectile.

The alleged attackers were detained, but the alarming incident illustrates the lawlessness of the Darien and migrants’ vulnerability to robbery, sexual assault, illness and the extreme elements. More than 7,300 migrants had made the crossing this year through mid-April, according to figures from border police, on pace to be the most since a previous surge in 2015-2016. Authorities did not respond to a request for updated numbers.

Panamanian President Juan Carlos Varela said last week that at least 4,000 migrants were in Bajo Chiquito, Penitas and in western Panama near Costa Rica, the next stop on the road to the United States. Varela acknowledged the difficulty of dealing with the migrant surge, which has left authorities scrambling to impose order.

Simply closing the border with Colombia would be “difficult” and wasn’t an option, Varela said: “That would put the lives of these people in jeopardy.”

During a recent visit by AP, about 1,000 migrants mostly from Haiti, Cuba and African or South Asian nations were in Bajo Chiquito, home to some 300 inhabitants from the Embera indigenous group. The migrants slept in the wood-siding and zinc-roofed homes of the locals, paying $3 a day for the privilege, in tents or on mats spread out under a shed-like structure.

Sitting on the ground, they sipped morning tea and hunched over bowls of a milky gruel. On a wood plank wall, many who passed through had scrawled their names and places of origin: “Kamal Hossain Bangladesh.” ″Kamaldeeb — INDIA.” Around nightfall a local antenna caught a signal that let migrants — at least those who weren’t relieved of their cellphones along the way — chat with loved ones back home.

“I spoke with my relatives, who are worried,” said Alioska Peña, a 32-year-old from Matanzas on Cuba’s northern coast who arrived May 23 with her husband and 9-year-old daughter. “They asked how we were doing.”

Migrants complained of a shortage of medicine to treat common maladies such as diarrhea. Men, women and children bathe and defecate in the river, which is also the village’s source of drinking water.

In Bajo Chiquito the migrants also register with police for the first time in the country. About 100 leave each day for Penitas. A border police official who was not authorized to discuss the issue and did so on condition of anonymity said most opt to wait for a place on one of the boats — perhaps mindful of the perils of continuing on foot, after having seen death and danger elsewhere in Darien.

It’s a wait of about 10 days, for a trip that takes a couple of hours. But the river holds its own perils.

AP journalists accompanied a group of four narrow, wooden boats as they ferried nearly 50 migrants to Penitas. They sat single-file, wearing olive green life vests provided by police, packed as many as 13 in each vessel.

Javier García, another Cuban, said he had left his pregnant wife back in Peru and they hoped to meet up somewhere in Panama. In the heart of Darien, he had run-ins with several dead bodies, a panther and robbers who stole $70 and his phone.

Just before boarding the boat, García made the sign of the cross: “We will see how it goes for us.”

The boat drivers frequently lifted their outboard motors to keep them from colliding with the shallow, rock-filled riverbed, steered toward the brush-lined shore in search of deeper waters and veered to dodge enormous tree trunks ripped out at the roots by previous flash floods.

According to border police, a crowded boat recently capsized after colliding with another while making the voyage. Fortunately nobody died — the water was shallow at the time — but authorities know that at least a dozen migrants, likely more, have been killed recently by fast-rising rivers elsewhere in Darien.

A handful of indigenous villages even smaller than Bajo Chiquito dotted the riverbanks, and the sound of birdsong was near constant. This trip went without incident, and the migrants arrived two hours later to a muddy berth at Penitas. García bought a soda and something to eat.

Here they would face another wait, along with over 1,000 migrants in an overcrowded makeshift camp, for buses to the Costa Rican border. But finally Darien was behind them.

Nguatem Michael, a 39-year-old from Cameroon, said his group was ambushed twice in the Gap. Robbers took their money and passports, and shot one of the migrants.

“They raped the women in front of their husbands while pointing guns at their heads,” Michael said.

Bello Vargas, who traveled from Havana to Guyana — which a number of Cubans said has become an increasingly popular first stop for — hoped ultimately to reach an uncle living in Texas. For now, he planned to seek temporary refuge in Panama, rest and save up money before resuming the trek north.

“It was hard,” Bello said of the eight-day jungle trek. “You go up mountains, you go down mountains. And every day it rained.”