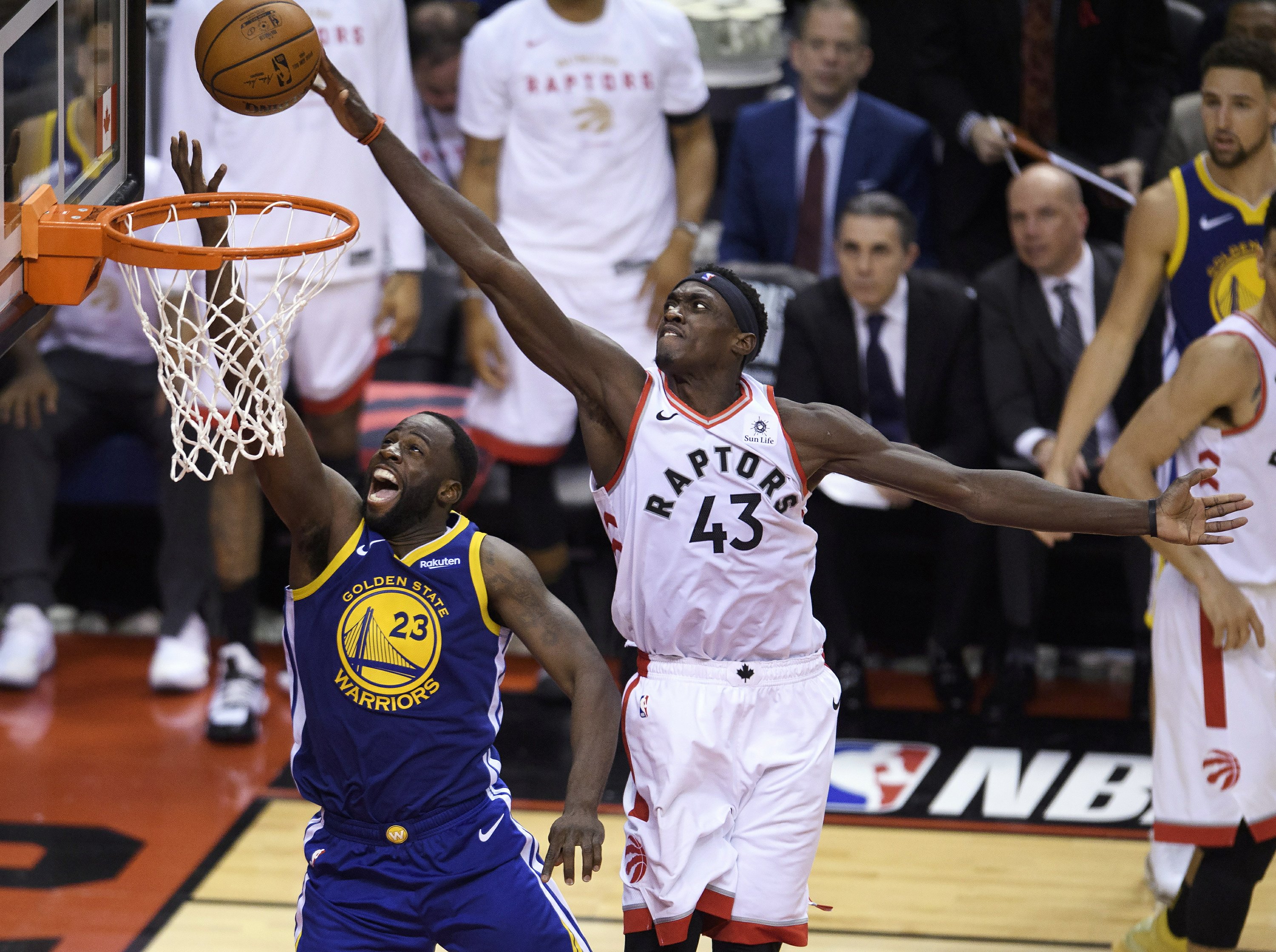 The Raptors hardly looked like newcomers to the NBA’s biggest stage, controlling the action most of the way against a Golden State team beginning its fifth straight NBA Finals appearance.

Kawhi Leonard added 23 points and Marc Gasol had 20 for the Raptors, fueled by a crowd that couldn’t wait for a party 24 years in the making.

“I think they were into it and that’s the way it should be, man,” Raptors coach Nick Nurse said. “That’s what home court is, and our fans deserve a bunch of credit for being a big part of that.”

Stephen Curry scored 34 points and Klay Thompson had 21 for the Warriors, who had won all four Game 1s in the last four years. All those had come at home, but this time Golden State doesn’t have home-court — or home country — advantage.

Game 2 is Sunday night in Toronto, which is hosting an NBA Finals game for the first time after the Raptors entered the league as an expansion team in 1995.

The Raptors were perhaps a little jittery at the start, with Kyle Lowry firing a pass well out of bounds on their first possession.

But they quickly settled in afterward, building a 10-point lead by halftime.

Siakam then went 6 for 6 in the third quarter to keep Golden State from gaining much ground, and the Raptors kept their lead around double digits for much of the final quarter, countering every attempt the Warriors made to catch up.

“I thought we made a good effort in the second half, got back in the game. Our guys did some good things, but made too many mistakes to actually go ahead and win the game,” Warriors coach Steve Kerr said.

All four of the Warriors’ previous finals were against LeBron James and the Cleveland Cavaliers, and they struggled to figure out a new opponent. Toronto shot 50.6 percent from the field and the Warriors never found an answer for Siakam, the finalist for Most Improved Player who has a nice start for an NBA Finals MVP resume.

The player nicknamed Spicy P was red hot, shooting 14 for 17 from the field — and he tipped in his own shot on the last of those misses with 54 seconds to play.

Fans began arriving at Jurassic Park outside the arena in the morning. There were lengthy lines at the arena entrances hours before the game, with some of the few fans who weren’t wearing Raptors red sticking to their original purple uniform with the dinosaur logo.

Rapper and Raptors global ambassador Drake sat in his courtside seat wearing a Curry No. 30 jersey. That’s Dell Curry, Stephen’s father who finished his career with the Raptors.

The Raptors introduced Dell Curry and some of their other former players after the first quarter, a group that included perennial All-Stars such as Tracy McGrady and Chris Bosh.

But it wasn’t until they went out and got Leonard in a trade with San Antonio that Toronto was finally good enough to get to the NBA Finals.

He wasn’t the dominant force he was in the first three rounds, when he averaged 31.2 points. But he had eight rebounds and five assists in his first NBA Finals game since winning MVP of the 2014 championship with the Spurs.

DeMarcus Cousins made it back from a torn left quadriceps to come off the bench in his first NBA Finals game, but the Warriors remained without Kevin Durant, the MVP of the last two NBA Finals. He traveled to Toronto but it’s unclear if he’ll play before the series returns to the Bay Area, with Kerr saying he would have to go through a practice first.

The Warriors had won every game since he got hurt in the second round but sure missed him against the Raptors, who are on a roll after falling behind 2-0 to Milwaukee in the Eastern Conference finals.

Warriors: Cousins finished with three points in eight minutes. … Draymond Green had his fifth triple-double of the postseason with 10 points, 10 rebounds and assists, but shot just 2 for 9. … Golden State had a 12-game winning streak in Game 1s snapped. … Curry’s four 3-pointers gave him a record 102 in the NBA Finals and he was also 14 for 14 from the free throw line.