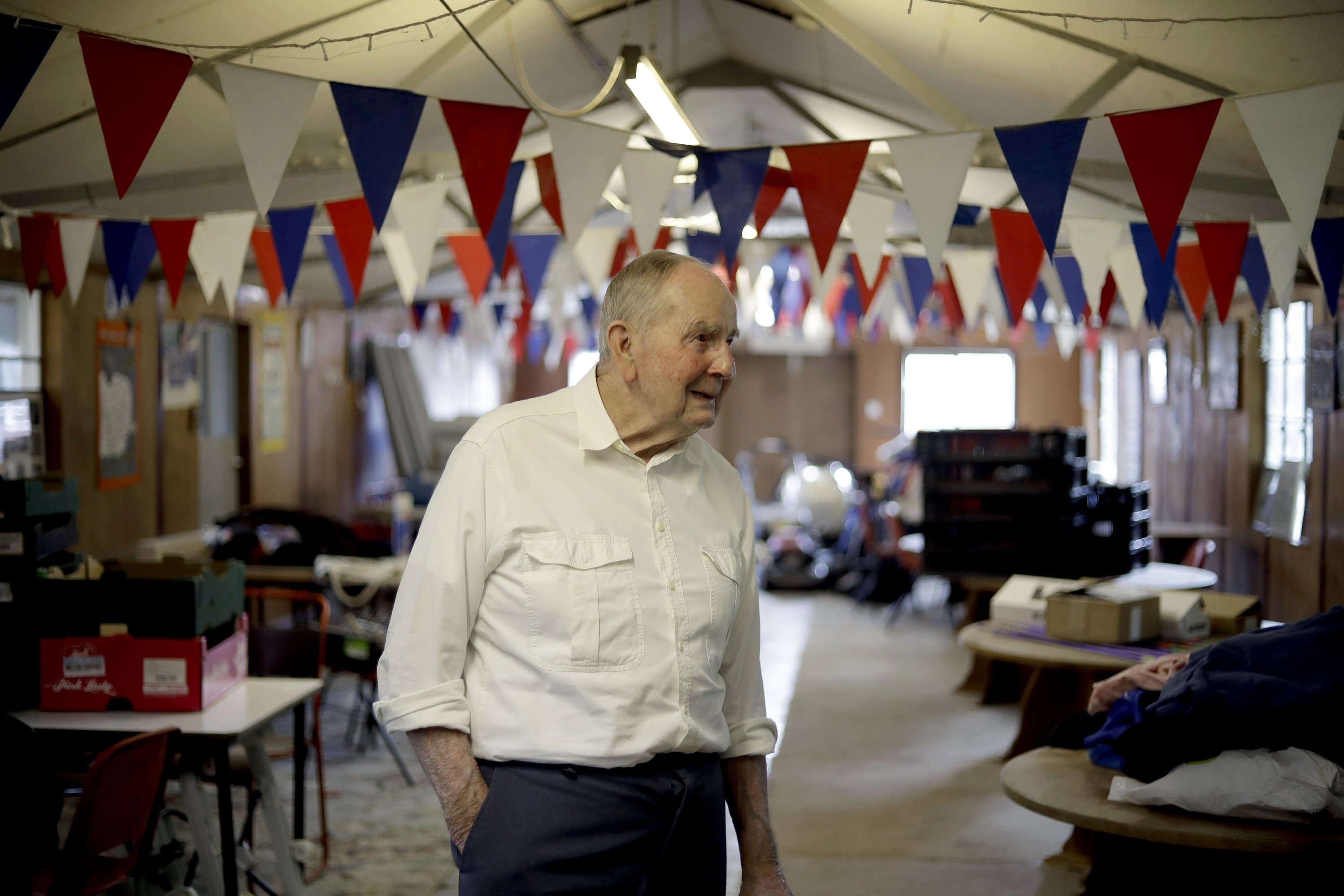 TOPCROFT, England — David Woodrow, 95, raises the American flag beside a memorial on his farm in eastern England every morning, weather permitting.

He makes sure that memorial is tip-top, too. Dedicated to the U.S. Army Air Force’s 93rd Bombardment Group (Heavy), it is surrounded by irises and geraniums Woodrow planted himself. The grass is trimmed to the millimeter. The granite gleams.

“There’s one thing for certain: If Americans hadn’t come over here and went to Normandy with us in ’44 and the Germans had pushed us back into the sea, we couldn’t have gone back again for another two or three years,” Woodrow, a D-Day veteran himself, said when asked why he put it there. “By that time, Germany would have had the bomb first and they would have won the war. They would have won the war then — if Normandy had failed.”

As the wartime allies prepare to celebrate the 75th anniversary of the D-Day landings, people around Britain are also remembering the Americans who paved the way for the invasion, including sailors who helped keep supplies flowing across the North Atlantic and air crews that flew bombing missions over occupied Europe.

From 1942 to 1945, more than 2 million U.S. military personnel were stationed in Britain. People across the country still commemorate that friendly invasion, which bolstered the nation’s defenses and gave many their first taste of America. From Portpatrick on the west coast of Scotland, where a plaque marks the site of a plane crash that killed 22 American airmen, to the Norfolk farm where Woodrow raises Old Glory, Britain is dotted with memorials to U.S. servicemen.

Some are formal affairs funded by public money, like the Cambridge American Cemetery, which houses the remains of 3,811 war dead, and the American Air Museum a few miles away, where the silhouettes of 7,031 lost aircraft are etched into a curving wall of glass.

But most are impromptu shrines built and tended by local people to honor those who died and to remember the thousands of others they drank and danced and fought with.

There was no government master plan to make this happen. The memorials just sprang up organically, particularly in southeastern England, where most of the U.S. air bases were located because of the proximity to occupied Europe.

Volunteers look after memorials in village squares, on corners of former airfields, at crash sites. Museums have been placed in former control towers. World War II memorabilia collections are preserved in pubs.

One of these personal monuments made headlines earlier this year, when 82-year-old Tony Foulds persuaded the U.S. Air Force to stage a fly-past to honor 10 American airmen who died in a crash in the northern city of Sheffield in 1944. Foulds, who believes the pilot saved his life by steering away from a field where he was playing with other children, has tended a memorial to the airmen since 1969.

Thousands rose at dawn in February to gaze at the fly-past.

No surprise there, said Briton Mike Warner, who serves as informal liaison between the U.S. Air Force and local communities.

“These individuals fought alongside our own forces,” he said.

One place that decided to pay tribute is Redlingfield, a village 100 miles (160 kilometers) northeast of London, which built a black granite memorial to 2nd Lt. Kenneth Rongstad and the crew of a B-17 bomber that crashed into a farmhouse on Nov. 19, 1943.

Janet Norman-Philips, 66, and other locals make sure it is scrubbed and bordered with bright pansies.

“People wanted to remember them,” said Norman-Philips, who worked with American veterans to erect the monument. “They were adopted, almost.”

There’s a reason the Americans made such an impression. Tiny rural communities, some with no running water, electricity or indoor plumbing, woke up to find construction crews pouring concrete on the flat farmland within striking distance of occupied Europe. Little Redlingfield soon had 3,000 servicemen from the Eighth Air Force as neighbors.

The Americans brought not just bombers but stuff the locals couldn’t get their hands on after years of war, like clothing, tinned fruit and candy. Local girls danced to swing music with American servicemen and the bases held Christmas parties for local children.

It wasn’t all songs and roses, though. The British were shocked by segregation in the U.S. military, and American manners — or the lack of them — sometimes clashed with the more traditional local culture.

But once they got over the shock, the Brits and the Americans generally got along.

James Clarey became fascinated with the story of the Americans in England as a teenager, when he found an airman’s ID bracelet at a crash site near his home. He began collecting artifacts and eventually set up the 453rd Bomb Group Museum and 8th Air Force Heritage Gallery at the Old Buckenham Airfield.

It’s the sort of place where a pilot can still land a small plane, park it on the grass and sit on picnic tables out front of the cafe. Actor Jimmy Stewart was stationed here during the war, as was Walter Matthau.

Here, surrounded by memorabilia and personal stories, one is reminded of the sheer poignancy of this D-Day, because the people who were there, the living links to a horrific conflict, are slipping away.

“This is kind of the twilight years for them,” Clarey said. “You must remember what these people did 75 years ago.”

Woodrow, who served in the Royal Air Force during the war, landed at Normandy to scout out locations for landing zones in northern France. Soon after leaving the RAF in the early 1950s, he bought the Hardwick Airfield and built his farm on it. The sergeant’s mess now houses his pigs and other wartime buildings hold a greenhouse and community hall.

Veterans of the 93rd started trickling past in the 1960s, anxious to revisit the place they had served. By the 1970s, the flow of unannounced visitors had become a steady stream, but Woodrow always invited them in.

When the memorial was dedicated in 1987, some 500 people came from the United States. There was, of course, a big party afterward.

One of Woodrow’s proudest possessions is a plaque that the bombers’ group gave him in 1995 “in gratitude” to him and his wife, Jean, for providing the staging post for men who wanted to remember.

Fewer veterans visit the memorial these days. There aren’t many left. But their children do, and their grandchildren as well.

Woodrow and his family still do what they have always done for the Americans: They open the door and say “Welcome!”