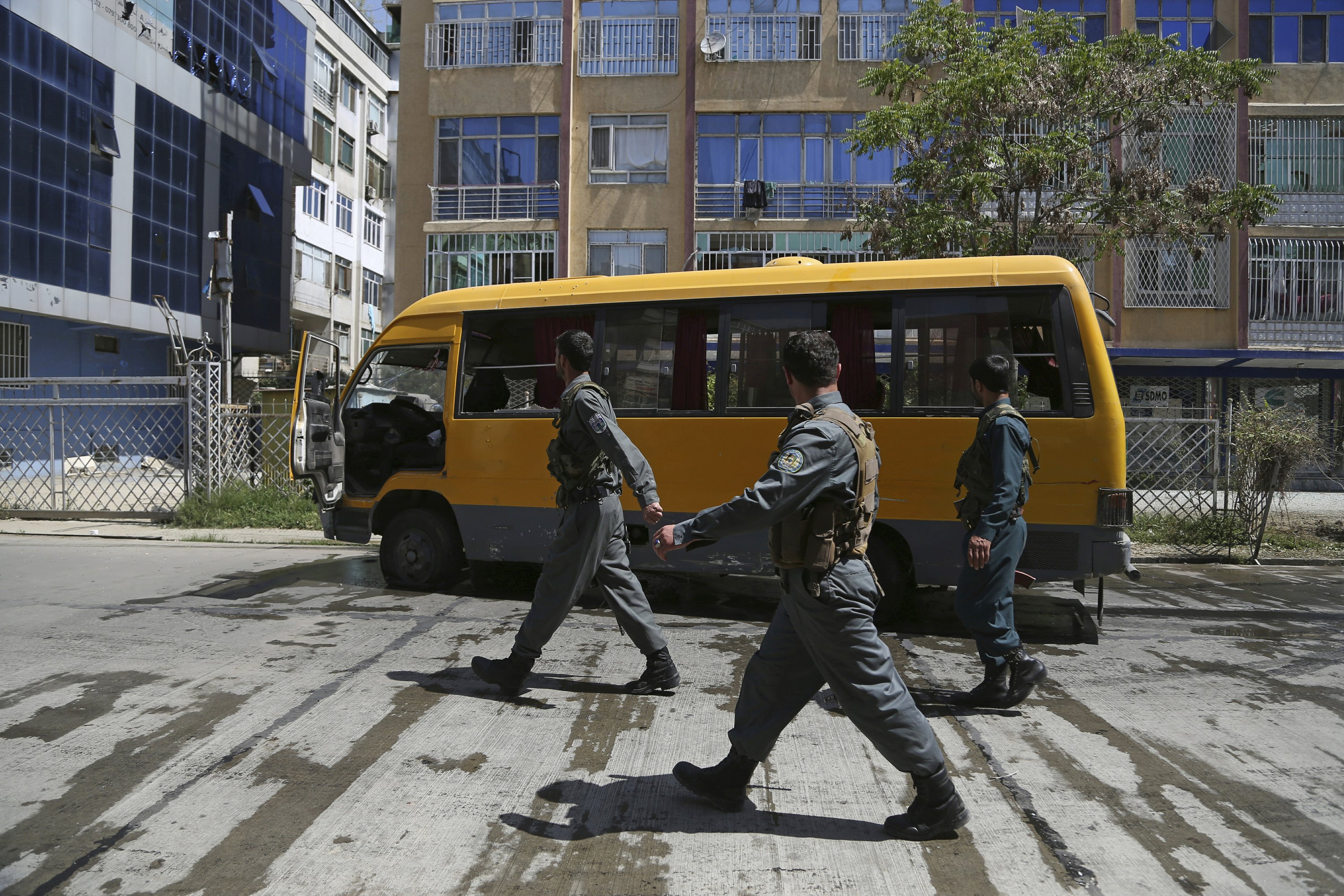 KABUL, Afghanistan — Three explosions struck the Afghan capital on Sunday, killing at least two people and injuring 24 others, officials said. At least two Afghan journalists were also injured in the blasts, according to a local non-governmental media organization.

The first bomb was attached to bus carrying university students, and was followed 20 minutes later by two roadside bombs in the same area, said Nasrat Rahimi, spokesman for the interior ministry.

Wahidullah Mayar, spokesman for the public health ministry, said 24 other people including four women were injured in the attacks. At least one of person was killed by the first blast, while the second died in the hospital. Mayar said it was not immediately clear which explosion they had been injured by.

Seven people were wounded by the two roadside bombs after arrived at the scene, located in a residential area of western Kabul, including five members of the security forces, Rahimi said.

Also wounded in Sunday’s attacks were at least two Afghan journalists, Ahmad Jawed Kargar and Mohammad Faseh Mutawakil, according to Nai, a media organization that supports open media in Afghanistan.

Kargar, a photographer for the European Pressphoto Agency, confirmed he was injured by a secondary explosion in a video he posted to social media while being taken to the hospital. Epa did not immediately respond to a request for comment.

Nai said the second journalist had been lightly wounded.

The Islamic State group claimed responsibility for Sunday’s attacks in Kabul. In a statement, the group said it set off an improvised explosive device on a bus allegedly transporting minority Shiite Muslims, and after security forces and journalists had gathered at the site, it detonated two additional explosives there.

Both Taliban and Islamic State militants are active in the capital and have staged attacks in Kabul.

In April 2018, nine journalists were killed and half a dozen wounded in a double suicide bombing in Afghanistan’s capital. In that attack, it appeared the journalists were intentionally targeted by a bomber who hid among members of the media rushing to cover the first explosion. IS claimed responsibility for the bombings, but didn’t say that journalists were specifically targeted.

The Afghan capital has witnessed a wave of attacks in recent days. On Friday, a Taliban suicide car bomber targeted a U.S. convoy on Friday in an eastern neighborhood, killing four Afghan civilians wounding three others, as well as lightly wounding four American forces. On Thursday, six people were killed when a suicide bomber blew himself up outside an Afghan army academy and training center.

Attacks by the Taliban have continued unabated despite peace talks with the United States as well as a fresh round of talks with Afghan notables last week in the Russian capital, Moscow.

The Taliban have rejected repeated demands for a cease fire, saying the fighting will continue until U.S. and NATO troops withdraw from Afghanistan.